Remembering those bygone high school days of long ago. Wondering whatever happened to Patty Simcox and Sonny LaTierri.  I think I was good friends with Patty for maybe a couple of weeks in tenth grade, but maybe it was her sister.  It’s hard to remember all the names, but the teachers—whoa—impossible to forget them.  Especially the bad ones, or the crazy ones.  Or the ones who were crazy and bad.  Miss Lynch for example; she was as tough as they come.

Wait a minute.  I never had a Miss Lynch.  And come to think of it, I thought I recognized the name Patty Simcox, but maybe I am thinking of another Patty.  Why are these names so familiar then?  Oh — I get it!  They’re characters from Grease.  That high school musical from before there was a High School Musical that evokes those four years of teenage-dom for most of us from all eras, because whatever the decade is, the cliques of kids and the adults who populate that world are timeless.

It doesn’t matter whether you were born pre or post T-bird time, whether you grew up in the ‘burbs, in the big city, or right here in Philipstown, the cool kids and the nerds, the ‘good’ girls and the ‘bad’ boys, the deejays and the fear-inducing High School Principal, they all strike the memory chord. 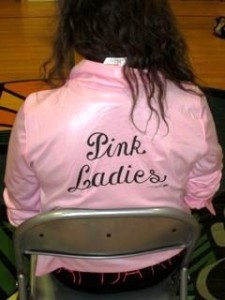 So come and take a step back into pompadour and pom-pom time as those Krazy Kids at Haldane right now honor their elders with a production of Grease, happening this very weekend, at, of course, the high school auditorium. Now the scuttlebutt on this production, directed by Martha Mechalakos and choreographed by Katie Bissinger, has been all about the boys and their dancing moves!  Yes, after a few years of almost dance-free musicals, the kids are dusting off their shoes and hand-jiving away, and the boys are leading the pack.

And who better to ask about this than the girls. Anna Ledwith, who is both assistant director and stage manager describes the transition: “They started out as non-dancers.  They have improved so much.  They are fearless, especially with the jumps and cartwheels.”

Dance Captain Tess Dul praises the boys as well: “Katie did a fantastic job with the choreography and the guys really stepped up to take it to the next level. They are all very impressive. ‘Greased Lightning’ is sure to be a show-stopper.”

Liz Richter, who stars as (the initially but I won’t give any plot away, so let’s leave it at that) ‘good’ girl, Sandy Dumbrowski, says, “In our previous shows there wasn’t much dancing, so we didn’t know what the boys were capable of, but Grease is a huge dance show and there’s been so much pressure put on the boys and they are doing so well; it’s amazing.”

Torrie Lebron, a/k/a Patty Simcox, agrees, “When you think of Haldane boys in musicals, you don’t think of dancing, but they’ve shown their determination and it’s come together pretty easily.  This is such a tight knit community and you’re going to see a lot of familiar faces up there, including lots of people who haven’t done this sort of thing before — it’s a big thing.” Sarah Hershey (Miss Lynch) spells it out: “Every time the boys rehearse ‘Greased Lightning'” all the girls are watching them, telling them to go for it.  Our peers are definitely going to be calling out their names. It’s going to be wild.”

Joel Goss, a theater professional who has served as production consultant on this show has observed the phenomenon: “At the first rehearsal of ‘Greased Lightning’ there were no girls around.  The next time the girls were here and they all ran and got their cameras — it was like paparazzi! The guys were actually the first to become committed.  It’s been a boy/girl battle and it’s really raised the bar.” 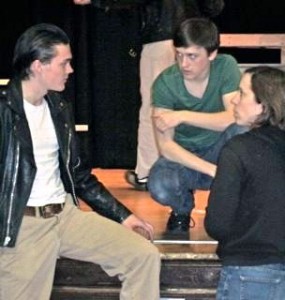 Choreographer Bissinger, a former Rockette who runs Cold Spring’s Hudson Valley Dance Studio confirms all of this: “The boys absolutely set the tone for how much energy and dedication was going to go into the dancing for the show, ‘Greased Lightning’ is the first number that I set and they just blew me away. Not a single guy was inhibited or afraid of anything I threw at them and now those same qualities will certainly show through in their performances. I suspect that it will stop the show in Act One. I am also particularly proud of the hard work all the kids have done with the top of Act Two — ‘Shakin’ at the High School Hop’ and ‘Hand Jive’ because I have given them some pretty challenging partnering work and lifts and they have more than risen to it. So much fun to work on this show with them and also to realize how nostalgic I was for some of the classic choreography from the movie which I have thrown into some of the numbers because it just works so perfectly and automatically brings a smile. Now I can’t wait to go see the show myself.”

The boys have a few things to say as well.  Michael Clemente, who is at the center of all the hip-shaking action, (if you’re thinking Elvis, you’re thinking correctly), had never taken anything like this on before, but didn’t show his inexperience in any way at a recent rehearsal, “It’s fun doing it.  I’m not that intimidated by it, but it definitely brings more confidence into it when everyone else is doing it with you.”

The one boy everybody mentioned as the biggest surprise was Peter Spratt, like Clemente a senior who has never danced on stage before. “You should see Peter Spratt,” was a common refrain. “Peter leads them and they all follow,” said Liz Richter.  Tess Dul added that “Peter Spratt has surprised everyone with his amazing aptitude for dance.” When asked about this newly-displayed talent, Spratt was modest, but pleased, “I feel as though I’ve always been a good dancer, but I’ve never done this kind of dancing and it’s great to be able to do it.  Everyone was confused and uncomfortable at the beginning, but that went away quickly. ‘Greased Lightning’ is the one song that everyone knows and everyone will be into it.” 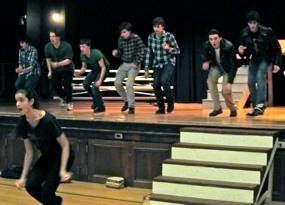 Despite the feel-good vibe of the show, Grease is still a lot of work and cast and crew have been putting in the time over the past couple of months to make it all seem footloose and fancy free this weekend.  Director Mechalakos, who heads the drama program at Haldane, points out the potential pitfalls: “because of the nature of the music there’s a danger in being too casual with it—it’s easy to put it on autopilot.  We’re working on making it not sloppy.  The cast is great, once I remind them of this, they always respond.  In comparison to the other shows I’ve done here, the music isn’t as challenging, but there’s the dance component.”

All of the kids involved, from freshmen in the ensemble to seniors trying musical theater for the first time, had much praise for the experience as a whole. Jackie Eschenberg, such a senior, had this to say, “It’s definitely been great.  The best part has been getting to know people I’d just seen in the hallway, and learning more about them than just their names.”  Junior Dima Spinelli had some of the same sentiments, “It makes me feel good to be around the people that I know here; it builds your energy.  Little things you learn each day make the performance better.  If you stand out as an individual, you’ll make the whole group better.” Alison Duncan, a ninth-grader, was positive as well, “There’s been a lot of commitment, but it’s been an amazing experience—totally worth it in the end.” 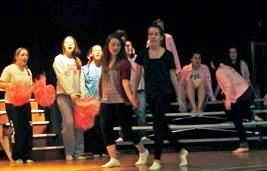 The girls in action

And by the way, as equal rights for women have come a long way since the Grease era, it is only fair to report that there’s some mighty fine dancing action from the girls as well.

Note to parents of the under-12s: although it’s a lot of fun, the version of Grease being performed is the original and is only lightly edited.  You may find some of the language, themes (which include teen pregnancy) and attitudes not suitable for your child.  The ‘teaser’ for the show, traditionally performed for all grades will this year be performed for 8th to 12th grades only due to the nature of the material. Admission is open to all, however, and if your child is watching Glee at home, you should have no concerns with Grease. 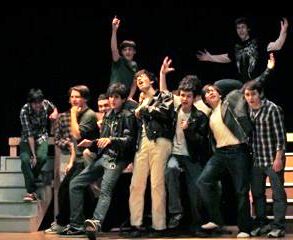 Grease will be performed at the Haldane auditorium on Friday and Saturday, March 25 and 26, at 7 p.m. and on Sunday, March 27 at 2 p.m.  Tickets cost $10 for adults and $5 for seniors and children, and can be purchased at the door.

Reporter’s note: In high school by chance I happened to have an English teacher named Miss Lynch.  And she happened to be tough.  Not crazy, but kind of mean.  Hopefully she isn’t reading this now, diagramming the sentences with a frown on her face!