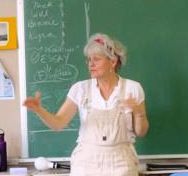 Self-consciousness crests early for most of us, reaching a peak at around age 13, when the only thing (possibly) worse than being spotted near a parent might be getting asked by a stranger to stand up and read a poem aloud to your class.  Not just any poem, either, but a poem you have just written.  Oh the horror!  And yet “¦ the seventh graders in Anne Kane’s English classes were doing just that, during the concluding portion of a two-part poetry workshop conducted by actress and poetry aficionado Suzanna Hay at Haldane recently.
The workshop had its genesis a year ago in a one-day, 40-minute class period edition.  This was deemed too short a span to free up the students to a point where they could let down their guard and turn their poetry spigots on.  This year, thanks to a grant from the Haldane School Foundation, Hay was able to visit on two successive days, using the first to break the ice with some movement to music designed to first facilitate introspection, then percolate a little rhythm, and, finally, shake down inhibitions.  A discussion of poetic forms and their elements ensued.  Kane felt the two-day process was essential, “The second day made a huge difference in not being goofy and being more comfortable.” 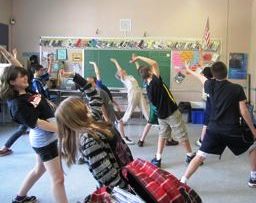 Loosening up before writing

Hay began the second day with a repetition of the movement work, encouraging the kids to “feel yourselves to be the gorgeous and handsome creatures that you are “¦ dive like a bird “¦ push that ocean away from you “¦” to the strains of a plaintive Jeff Beck guitar solo. A little Motown moved the group from reflective tranquility to revved-up mobility, and thus the poetry began. Asking the students “Have any of you had occasion when someone’s been mean to you?  Have you ever been mean to anyone else?”  Hay then read Thomas Lux’s poem, “The Swimming Pool,” to the class. Evoking the calculated cruelties and hierarchies of this age group in a prose-poem format, the poem’s accessible language yet complex perspective — “Better they are cruel to him within his presence,” “A disdain for those beneath us rather than a rage for those above” — had the kids listening alertly.  Following up with questions, “Those three who are unabashedly cruel — are they happy?  Not really.  Do you think we treat each other like that?  Sometimes. I know I have; I think you have too,” Hay urged the students to “step into someone’s shoes and take a look around — imagine how the other person would feel.”  A second poem, which varied from class to class, (e.e. Cummings and W.H. Auden were read in the sessions Philipstown.info attended) was read and then the students were directed to get out their notebooks. The sessions were punctuated by the site-specific poetry of the school, as the P.A. system blared sporadic announcements of the day in some as-yet-unnamed pentameter: “The boys bathroom is now closed! Report to the nurse’s office! The Modified baseball game has been canceled; there will be practice!”

Giving the students a choice of three scenarios (which varied slightly from class to class): a boy on a mountaintop, a girl in a graveyard, a dog waiting by the door, Hay gave them free rein to write, “at least three descriptive sentences, but as long as you wish,” reminding them to remember to address the why’s and what’s, “what’s the dog waiting for? “¦ “if you pick the boy on the mountaintop, describe him,” and then giving them ten minutes to write.  Once the time elapsed, the writers, seated at desks arranged in a circle, were asked to stand and read their new creations aloud to the other poets.  No one was forced to, but all were encouraged, Hay noting later “You can tell when kids really want to read, but are afraid, or when they are just private.  I respect that.”
Many students chose the dog by the door, and poetic melancholy seemed to dominate, with the canines doing their fair share of “waiting and waiting; no one came ever.” Portent was displayed in one boy’s work: “He senses something will happen,” and simile was utilized by another, “The darkness was like a black cat.”  Student Elena LaBreche prefaced her reading by saying “This is extremely depressing,” and then launched into a grim, vivid description of an ominous scenario, “I was the one who sent the pathetic old woman to her grave — but she deserved it.”  Asked if she wrote a lot of poetry, LaBreche said “Not really, my head is overcrowded with people, not poems, but stories, mostly in my head.” 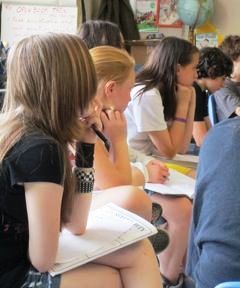 Listening to a poem being read

The second class observed was a highly animated and responsive group.  After Hay read her poetry selections, several of the boys excitedly raised their hands to tell Hay of their favorite poems, which included, for Dante Nastasi, “O Captain! My Captain” and Jack Lovell, “Beowulf.”  The excitement continued as everyone in this class vied to read his or her work.  Excerpts from their poems included:

“Up on the mountaintop, licking a juicy lollipop, the sky turned grey, what the hey, I’ll come back another day.”

“The boy was alive to the mountains and himself — to everyone else he was dead.”

“Lying in the sun while his owner is having fun, as the intruder comes in, he closes in “¦.”

“Went through the crack, saw everything was out of whack”¦”

The enthusiasm generated by this class was such that the end of period bell rang before a few students were able to share their work.

The workshop developed when Kane was searching for ways to enhance the 7th grade English curriculum.  Kane and Hay met several times to develop the program, which Kane says “is 98 percent Suzanna’s.  It’s her imagination and vision of how this would work in ways different from what I would do in the class, which is the goal.  I was looking for something which would not be graded, which would open up their minds.” When Hay began thinking about the program, she started from scratch, “What am I going to do?  Well, what it is, is what I do most mornings in my living room.  It opens the mind up.  I tried to come up with something to spark the love of knowledge, words, music — they’re so intertwined.  We shorten language now unbearably, by texting and all these things.”  Originally thinking of rap as an entry point, Hay changed her mind, deciding that “rather than me going to them [in a form familiar to them], I wanted them to come to me.” Calling last year’s one-day workshop “a little pulled back,” this year Hay visited the classes about a month before the workshops, “to get a pulse, a read, on the kids,” calling that process “extremely helpful. In the end, Hay’s greatest hope is that after participating in the workshop, the children realize that “poetry can come from anything.”  Both Kane and Hay would like to institute the poetry workshops on a yearly basis.
Photos by A. Rooney

Reporter’s note:  in reporting this story, the writer hopes she has heeded the instructions on “Organizing an Essay” displayed in Ms. Kane’s classroom: