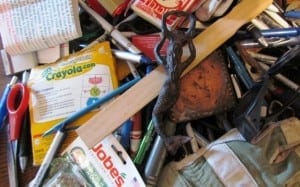 People in Florida, Louisiana, Mississippi and other steamy, sultry locales have no seasons to contend with and as a result lack the urge to do spring cleaning – something that is an inherent part of northern life. For some at least. I have not always immediately jumped onto the spring-cleaning band wagon and other domestic necessities.

In fact, I admit that on more than one occasion I’ve purchased new jumbo packs of sox and underwear to put off doing laundry for a few days. But this spring for some reason, perhaps due to the freaky atmospheric conditions we’ve experienced, I felt a very foreign yearning to rearrange, tidy up and otherwise put my little house on Garden Street in order. I came up with a vision easily enough and immediately felt a wave of smug satisfaction as I imagined making good on one of very few New Year’s resolutions I’ve made in the current century – to make my house more accurately reflect who I am. 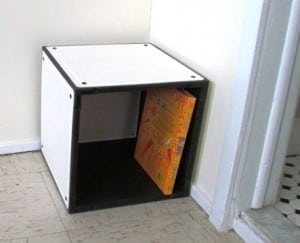 The hazards of Cubism

I immediately bought 15 cubes that double as storage and shelving units. They’re cool – made of sugar cane with a touch of bamboo – though the ad did contain the ominous words “Assembly required.” Luckily it did not say “So easy an eight year old can do it.” The cubes are the key element in my decorating plan, the primo domino that must fall before everything else can find its rightful place. They will form a five foot tall right angle triangle – with five cubes on the bottom and one on the top. They will house and display my most treasured books, a sculpture, vases, lanterns and other prized pieces. I cleared away the only wall that can accommodate the cubes, assembled one and placed it against the empty wall. It looked damn good. My project was underway and taking shape as planned.

That was at least two weeks ago. Maybe three. Cube number two has not yet been assembled. My kitchen now overflows with extra chairs, a huge antique trunk, a bookshelf filled to capacity, boxes of books – not to mention the boxes containing the 14 unassembled cubes that now sneer at me each time I enter my house. I can’t get into the fridge and most of the cupboards. I’ve begun to worry that my kitchen, now barely passable and definitely a safety hazard in the dark, may in fact be the true reflection of who I am.

I need to regain my momentum. I need a quick victory – something more reasonable than assembling 14 more cubes – or doing the laundry. I settle on a strategy. I will clean out the kitchen junk drawer. It’s been more than two years since I moved in and it’s getting very difficult to open and close the drawer. Its time.

This is a live report. I am actually sorting the contents of the junk drawer, now spread across a table at Philipstown.info headquarters at 69 Main St., as I write this piece. I brought the contents here because I could not get to or sit at my kitchen table. Here goes.

Anatomy of a Junk Drawer 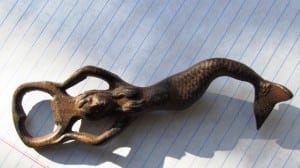 Natural laws
The world seems intent on solving what it sees as the junk drawer “problem.” I Googled “kitchen junk drawer” and stopped looking after 50 pages of websites – talk about junk! Entries consisted mainly of products and services aimed at ending junk drawers once and for all. An unlikely scenario and hardly the point. Trying to eradicate junk drawers is about as likely as stopping little kids from playing in puddles – or eliminating fighting in hockey. It’s not about putting an end to junk drawers.  It’s about seeing how long you can go between cleanouts. It’s like driving with the “you’re almost out of gas” idiot light on and hoping you’ll make it to the next gas station then passing just one more for good measure. A “perfectly organized junk drawer” may be the best oxymoron of all time, narrowly beating out “too much garlic.” An organized junk drawer simply cannot exist. It’s a natural law. Thank the gods that George Carlin isn’t still alive to give this any thought. 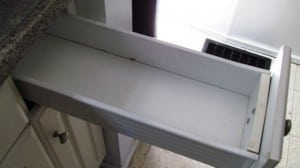 Moving forward
My strategy now is quite simple. Throw out the few really useless items like the four inches of packing tape along with any offensive objects such as the really ugly sunglasses. Put the pliers and screwdriver back in the toolbox once I find it. Return as many of the stolen ballpoint pens as possible to their rightful owners. Buy a mouse trap. Feed the jade plant – it’s been more than two years. And put everything else back in the junk drawer where it belongs.

The pledge
What about the 14 remaining cubes? I now have the confidence I need to tackle assembling them. Compared to the junk drawer it will be child’s play. I guarantee that by 9 p.m., one week from tonight, they will all be assembled and in place. I will post a photo to prove it.  What’s in your kitchen junk drawer?
Photos by M.Turton