Cold Spring Village Board gets through business quickly

Reports given at the Cold Spring Village Board meeting on Tuesday, Jan. 8, revealed a few of reminders to village residents concerning upcoming meetings, water meters and, most importantly, the clearing of sidewalks. 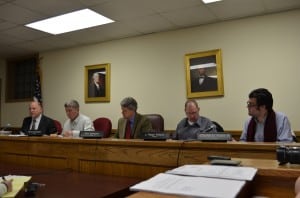 Cold Spring Mayor Seth Gallagher said in his report that there have been problems with the timely removal of snow and ice from sidewalks in the village, which is required by law in a “reasonable” period of time after snowfall. If residents have trouble removing ice, they are to at least put down calcium chloride or sand to improve traction and prevent slipping.

Those who do not comply with this requirement can be fined up to $250, and Gallagher warned that police will be more active in enforcing it. He mentioned that even Tuesday, several days after the last snowstorm, a woman fell on Main Street, and police were called to deal with the problem area, which was cleaned immediately.

Trustee Bruce Campbell shared a report from Superintendent of Water Greg Phillips, indicating that water meter readings are in progress (though Village Clerk Mary Saari said most of it was already done) and reminding homeowners that the meters need to be kept free of snow, ice and debris to facilitate meter reads.

On Feb. 5, organizers of the Putnam Cycling Classic, which was recently proposed by Putnam County Tourism to take place in May, will present on the event. Gallagher said that Officer-in-Charge George Kane will attend the meeting to address traffic problems that arose when the classic was first held in October 2012.

On Feb. 19, an engineering firm will present their inundation study and map and discuss plans in case of a catastrophic event at nearby dams.

Village Accountant Ellen Mageean reported that Village Clerk Mary Saari has applied for and received a New York state grant to scan the minutes of village meetings and to purchase software that would make the scanned minutes searchable. “The village is going to receive $17,655 to help with records management,” said Mageean. The board thanked Saari for her hard work on the grant. 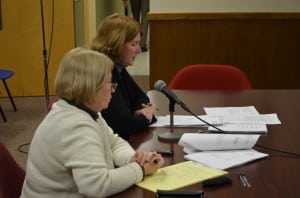 Mageean also recommended the approval, in light of recent problems with the village PCs, of a contract for computer support from Anthony Adamo, who would improve the network infrastructure for both the village and the police department as well as conduct monthly maintenance.

Building Inspector Bill Bujarski highlighted in his report that the gas tanks at the derelict Impellittiere Motors on Fair Street have finally been removed, and that there is increased cooperation with the owner, R.T. Impellittiere. He said, however, that the building still needs a lot of work to be in compliance with code and that he would continue to pursue those improvements.

In his report from the Chamber of Commerce, Trustee Chuck Hustis mentioned that the chamber would like the village’s help in posting signs on Main Street that there is free parking in the Metro-North lot on weekends and holidays.

The only sparks to fly on Tuesday were those launched by Hustis, especially during the approval of the minutes of the last meeting, and even those fizzled before they could ignite anything. The Dec. 18 meeting had seen Cold Spring resident Stephanie Hawkins accuse Gallagher of intimidating the Historic District Review Board so much that they had to file a police report about his behavior, which the mayor denied.

Hustis said he wanted to change the minutes, specifically the last sentence of the paragraph describing her objections, which stated, “Lastly, she called upon the board to convene a Board of Ethics to investigate.” Hustis said this was not descriptive enough: “I just think that sentence is incomplete because it’s leaving you wondering why the Board of Ethics is being called. I’m not trying to go backward, because that was enough of a barnyard jamboree from last month, but I’m just saying that … .”

Hustis answered, “Lastly, she called upon the board to convene a Board of Ethics to investigate the claims made by Stephanie Hawkins.” The change was acknowledged and the minutes quickly approved with no further mention of the accusations.

Later, during board reports, Gallagher called on Hustis, who waved him on to ask Trustee Ralph Falloon for his report. As Gallagher moved onto the next agenda item, Hustis interrupted, “I have nothing to report, either.” Hustis said he was trying to be nice when the mayor “tried to cut off Ralph” and that “we’ve got to go in order.” Gallagher said, “I didn’t cut off Ralph,” and showed Hustis the order in which he was calling for reports.

4 thoughts on “Failure to Clean Sidewalks Could Result in Fines”