The three candidates for two Cold Spring Board of Trustees seats tried gingerly to distinguish themselves at a debate last Monday, March 4, but generally found themselves in agreement on the best approaches to governing the village for which they all expressed full-throated affection. The candidates, challengers Michael Bowman and Stephanie Hawkins along with incumbent Bruce Campbell, participated in a closely timed debate format sponsored and conducted by the Putnam County News and Recorder (PCNR).

A second forum for the candidates, sponsored by Philipstown.info/The Paper will be held Wednesday, March 13, at 7:30 p.m. in the music room at Haldane. 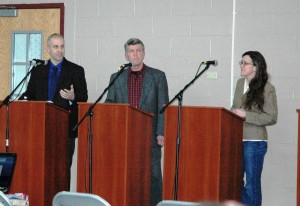 From their two-minute opening statements until their two-minute closing statements, the candidates cautiously dwelled on their lifelong (Bowman and Campbell) or more recent (in Hawkins’ case) volunteer involvement in the civic life of the village. Although PCNR editor Doug Cunningham and two of his reporters occasionally lobbed a potentially controversial question, the candidates mainly stayed within their comfort zones in relating their qualifications, their sense of the priorities for the village and the need for working together to accomplish things.

Ralph Falloon joined the debate as a sort of one-man band answering questions from the PCNR staff without fear of contradiction from an opponent, since he is running alone in the mayoral column of the ballot. Falloon urged listeners to “think long and hard” about which trustee candidate to vote for, indicating they were all qualified and that he would be pleased to work with any combination of winners.

All the trustee candidates agreed on the need for more open, transparent government, better services for senior citizens, careful planning on capital projects and the need for revision of village laws to reflect the recommendations of the already adopted Comprehensive Plan. They also agreed that an extraordinary effort is needed to find ways to get the Butterfield project back on a faster collaborative track and in the bargain save the seemingly always-on-the-verge-of-fleeing post office.

And the three candidates, one of whom will be without a chair when the music stops on March 19, agreed that a legally sustainable regulation needs drafting to prevent formula or chain stores from setting up shop in the village. They all reported hearing about this issue on the campaign trail.

“No one wants to see a McDonald’s or Burger King in Cold Spring,” said Bowman, a big supporter of Kenny Elmes’ right to open a Dunkin’ Donuts franchise on Chestnut Street. He said his only concern was legal, stressing that no such law prevented Elmes from proceeding with business, which he described as a matter of right.

“No one I have spoken to is in favor of franchise businesses locating here,” said Campbell. “The [Comprehensive Plan] Special Board is working on it [framing a village law].” Campbell is the trustee liaison to the Special Board.

Hawkins reminded the audience of approximately 45 people that she is on the Special Board and was working directly on the franchise ban. “If we are careful and deliberate, we can protect what we value most in our civic life and promote smart development as well,” she said.

Even the Butterfield development issue, no doubt the most pressing problem facing the trustees after the election, did not generate much difference or specifics among them as to possible approaches toward solution. All of the trustee candidates mostly agreed with Falloon’s promise “to work our tails off to move this project forward.” Falloon suggested without contradiction that the board of trustees would meet every week, if necessary with developer Paul Guillaro, to arrive at a satisfactory conclusion. But neither he nor the others said specifically what needed to be done to untangle the developer’s proposals from citizen objections and questions.

Some small degree of difference could be discerned when discussing obstacles and time delays developers might experience in the village planning review process. Bowman for example was sharply critical of the Kenny Elmes experience over the approved Dunkin’ Donuts franchise. “I believe he was mistreated by the Planning Board. He had a right to develop his property and it was infringed upon,” he said. Bowman said further he thought Elmes had to spend too much time and money complying with excessive Planning Board demands for information. Bruce Campbell pretty much agreed.

Hawkins didn’t disagree about the importance of having an efficient process. “I agree it took a long time,” she said. However, she emphasized the importance of applicants appreciating why the process might take a long time in the interest of protecting the village. She also argued for more public empathy toward both applicants and the people who volunteer to perform reviews of projects.

At one point Falloon, referring to the Butterfield project, pointedly said, “If a development has a long process, it shows the village doesn’t roll over for a developer.”

All three trustees commented on recent board history under the leadership of outgoing Mayor Seth Gallagher, acknowledging to varying degrees that tensions and sharp disagreements had thwarted progress on issues such as Butterfield. “I have never seen the community so fragmented and split,” said Bowman, a Gallagher antagonist, expressing the direst perspective at the outset of the debate. “It’s been a long time since we’ve seen a board working as a team,” he added later. He said he wanted to see matters moved forward collectively as a board rather than the mayor setting the agenda and always leading the discussion.

Hawkins, once a Gallagher supporter, agreed with Bowman that better communication was a key to accomplishing better board and citizen relations. She spoke further about the need for better understanding and treatment of residents. “A resident standing up in front of the board is asking for help. It’s important to welcome people and express concern for their situation,” she said.

Campbell unapologetically admitted that he was the candidate most closely aligned with Gallagher, given the mayor appointed him deputy mayor. He said his 36 years working as a civilian at West Point answerable to a military chain of command had instilled in him “a respect for the person and the position” of whomever is in charge. He said he thought a lot of good work was accomplished even though “Seth and I are different people.” Campbell expressed optimism that a new board would move forward in a more collaborative way.