Articles recently appeared in both the Poughkeepsie Journal and The Wall Street Journal, detailing the arrest in Newburgh of a “57-year-old upstate New York man [who] is accused of operating a human trafficking ring.” According to the news, “[A]t least three female victims were subjected to physical and sexual abuse in connection with the trafficking ring.” The suspect is being charged with rape and sex trafficking, among other offenses. 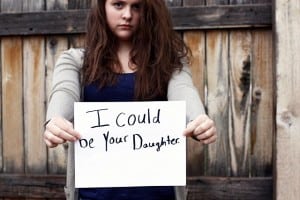 New York State is no stranger to human trafficking and modern-day slavery. Cases have been found from New York City and Long Island, north to Syracuse and Buffalo, and throughout the farmlands and lake country. Slavery occurs in our cities and towns, in our fields, factories, and in the house next door.

In 2010, a respected author living in the affluent Northern Westchester suburb of Pound Ridge was arrested for both sex and labor trafficking. Last November, a nine-person sex trafficking ring was broken in central New York state, after it was found that the traffickers had advertised the services of a minor child in newspapers in Rome, Utica, Albany, Oneida, Herkimer — and Fishkill. And now, we read that a trafficking ring was allegedly doing business in Newburgh, within ten or twelve minutes of our homes.

Human trafficking and its direct offshoot, contemporary slavery, are a massive global problem. Slavery not only exists throughout the world today; it flourishes. Slavery is legal nowhere, and yet it is practiced everywhere. It is estimated that approximately 27 million people are in bondage worldwide; that’s more than twice as many as were taken in chains during the entire 350 years of the African slave trade.

Trafficking in humans is one of the most profitable criminal enterprises of our time, along with drugs and guns, and is responsible for tens of billions of dollars annually in criminal revenues worldwide. Our first impulse is to blame all those backward Third World countries — those “emerging nations” — and we would be partly right. But it’s also such “civilized” countries as England, France, Spain, Italy, Israel, Scotland, Ireland, Greece, Sweden, Denmark, Japan, China … and the United States. Most Americans do not know that slavery is alive and more than well right here, thriving in the dark, and practiced in many forms and in places we would least expect.

Historically, we Americans see ourselves as the world’s foremost messengers and practitioners of personal freedom. We are, after all, the “Land of the Free.” And yet, there has never been a single day without slavery on this continent, from its European discovery right up to the present moment. Where pre-Civil War slavery was legal, and a sign of wealth and status, today’s forms of bondage are hidden, insidious, and often nearly impossible to detect. And while a slave in the 1850s South cost upwards of $1,200 — around $50,000 in today’s dollars — a modern-day slave can be purchased for as little as $100. Nonetheless, despite the differences, if a person is kept by means of force, fraud or coercion, that person is defined by federal law as a slave.

According to a U.S. State Department study, nearly 18,000 foreign nationals are trafficked into the United States from at least 35 countries and enslaved here each year. Some victims are smuggled across the Mexican and Canadian borders; others arrive at our major airports daily, carrying either real or forged papers. Victims come here from Africa, Asia, India, Latin America and the former Soviet Republic. Overwhelmingly, they come on the promise of a better life, with the opportunity to work and prosper in America.

Many come in the hope of earning enough money to support or send for their families. In order to afford the journey, they fork over their life savings and unwittingly go into debt to people who make them promises they have no intention of keeping; and instead of opportunity, when they arrive here, they find bondage. These victims of today’s slavery can be found — or more accurately, not found — in all 50 states, working under coercion as farmhands, domestics, sweatshop and factory laborers, gardeners, restaurant and construction workers, sex slaves and prostitutes. They do not represent a class of poorly paid employees, toiling at jobs they might not like. They were bought and sold specifically to work, they are unable to leave, and are forced to live under the constant threat and reality of violence. By both historical tradition and legal definition, they are slaves.

Nor are native-born Americans immune from slavers; some sources, including the federal government, estimate in the hundreds of thousands the number of U.S. citizens – primarily children and adolescents — at risk of being stolen or enticed from the streets of their own cities and towns annually. Today, we call it human trafficking, but it is nothing less than the modern-day slave trade.

Federal studies have ascertained that most trafficking cases occur as forced labor. However, many who are aware of the term “human trafficking” think of it only in terms of sex slavery. This is not accidental, since the emphasis by the news media, the government and Hollywood is on the issue of sex trafficking. Throughout the recent Bush administration, the government made it clear that when it talked about human trafficking, it really meant sex trafficking. Indeed, most state trafficking laws focus on prostitution, forced or otherwise, while victims of the many forms of labor trafficking often go unacknowledged, and uncared for. New York is no exception.

After stonewalling for two years, the Legislature in Albany finally passed a human trafficking law in 2007; it categorizes sex trafficking as a B felony, and labor trafficking as only a D felony. This is ironic, considering the number of agricultural, domestic servitude, and miscellaneous forced labor cases that have been uncovered within the state.

In fact, one of the earliest prosecutions under the Trafficking Victims Protection Act of 2000 was an agricultural slavery case brought in New York. It is referred to as the Garcia-Botello case. The Garcias were big upstate New York state labor contractors who had been running a trafficking operation for years. They were part of a network that smuggled immigrants — men and teenage boys — across the Mexican border into Arizona, trucking them to the farms of three New York counties and enslaving them there.

They were forced to work in the row crops of onions, cabbage and tomatoes. The situation was typical of those found in such cases: instead of the promised favorable working conditions and decent wages, they were met with threats and acts of violence, squalid living conditions and confiscation of their pay by the traffickers — in this case, various members of the Garcia family. Six of the workers finally escaped and blew the whistle; eventually the trafficking ring was busted, and five of the Garcias were arrested, prosecuted and convicted. The Farmworker Legal Services of New York (now known as the Worker Justice Center of New York) then filed suit in civil court on behalf of the victims, against not only the Garcias, but 20 growers as well, on the premise that they were aware of the workers’ servitude and had done nothing to stop it. The suit is ongoing.

One of the greatest stumbling blocks to an effective nationwide campaign against human trafficking is a lack of proper training for police on all levels. Chief Investigator A. Gerald Schramek of the Putnam County Sheriff’s Office said he is not only aware of the threat posed by human trafficking; he has ensured that he and his fellow officers receive the training necessary to recognize a case of sex or labor trafficking, and to approach it with skill and sensitivity. “Our investigators,” Schramek stated, “have taken advantage of every opportunity to attend trafficking seminars. We took part in the training seminar sponsored by the Pound Ridge Police Department shortly after their trafficking case surfaced in 2010. And as recently as this past February, we attended a training session co-sponsored by the Westchester Department of Probation and the Family Justice Center.”

For those who wish to know more about human trafficking and modern-day slavery, information is readily available online, on such websites as freetheslaves.net and PolarisProject.org. They provide lists of ways in which the average citizen can help.  But the first and most vital step is to recognize and acknowledge that the problem exists and that it exists in rural areas as well as cities and towns, in private homes as well as businesses and brothels. We must realize that we are not immune to this blight simply because we live in the country, or because we think it can’t happen here. It can. It does.

Ron Soodalter is the author of Hanging Captain Gordon: The Life and Trial of an American Slave Trader and co-author of The Slave Next Door: Human Trafficking and Slavery in America Today.

One thought on “Human Trafficking: A Cause for Concern Nationally and Locally”