Long wait for short piece of paving nears the end

In an action that capped a period of fits and starts on a sometimes-controversial project, the Philipstown Town Board Wednesday night (June 19) approved a $538,100 bid for paving the lowest 450 feet of Old Albany Post Road, the historic dirt lane that goes on to snake several miles through the heart of Philipstown.

By voting unanimously to award the job to a Poughkeepsie construction firm, Ben Ciccone Inc., which submitted the bid, the board moved the long-anticipated project from discussion, planning and paperwork to pending construction. Only one other bid came in, for $688,094.82. Ciccone is expected to begin soon, though no date had been set by Wednesday evening. Councilors Dave Merandy, John Van Tassel and Nancy Montgomery joined Supervisor Richard Shea in the decision; the board’s fifth member, Betty Budney, was absent. 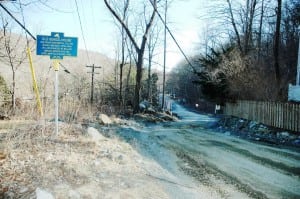 “This is the culmination of over five years of work,” Shea said, citing the various delays that frustrated those hoping to get the project underway faster, at a cost less than that represented by Ciccone’s winning bid. “If there’s a definition of dysfunction, it has to be this process,” stretching back half a decade. He said he could understand how a member of the public might assume “that if this is the best government could do, who needs them?”

The board had expected to vote on another bid, for $366,250, in early March. But the contractor who submitted it withdrew at the 11th hour after intervention by the Old Road Society, a group of dirt-road aficionados concerned about shortcomings in the intended approach to the work. A vigorous round of further public debate followed, extending to include the Federal Emergency Management Agency, which sought a fresh archaeological review.

The road dates from the Dutch and British colonial period and a 6.6-mile piece is on the federal National Register of Historic Places. After the setback in March, the Town Board agreed to revise the specifications, to address complaints that the first set lacked important details.

Board members expressed frustration at the higher price attached to the project now. “The differences in the bid results are staggering,” Montgomery said.

“It’s a shame. But the work needs to get done,” Shea concurred.

The paving project began when flood damage in April 2007 led to a federal declaration of a disaster and plans to repair and prevent further devastation to the southernmost section, from the intersection of Sprout Brook Road to Upland Drive. The Town of Philipstown obtained FEMA financial assistance for the endeavor, and in summer of 2011 the town government, FEMA, Old Road Society, New York state agencies and the Advisory Council on Historic Preservation adopted a Memorandum of Agreement on proceeding with the work.

Given the higher costs the town faces now, “we will be looking for more funding than we’ve received” so far, Shea announced, expressing guarded optimism about obtaining it.

The board also voted unanimously “nunc pro tunc” or “now for then” to advertise for bids for another Philipstown Highway Department project, involving a culvert along Indian Brook Road in Garrison. Legislative bodies use “nunc pro tunc” votes to formally sign off on efforts already launched — in this case, the seeking of bids.

“We do need to get the job done, so we can get Indian Brook back up and running” and deal with the problems the homeowner at the culvert site, Barbara DeSilva, has faced from flooding, storm damage and more. Improvements in the area began before hurricane damage wiped everything out and made even more remediation necessary. The road runs along Indian Brook.

She complained that she has been told nothing about the town’s current undertaking, despite numerous phone calls — which she said went unreturned — to the Highway Department. “I think I’ve been treated very shabbily, and I just don’t think it’s fair that I know nothing,” she said. “It’s my property.”

The initial remediation a few years ago failed, and this time “it’s got to be done properly and they’ve got to do a stream study,” DeSilva told the board. But she assured board members that she wants the project to proceed, albeit in the right manner. “Everybody wants it done. I’ll be very happy when it’s done,” she said.

Upon learning that by casting a “nunc pro tunc” vote the board acknowledged that advertising for contractors was already underway, she protested. “I’m shocked” about not being apprised of the plans, in light of all the concerns she has expressed to date, she said.

Shea promised to set up a meeting with her and Highway Superintendent Roger Chirico to review details of the planned work.