Sometimes cooking begins at the end: You have a vision of a particular dish in mind, and you set out to make it – to reach that ideal. 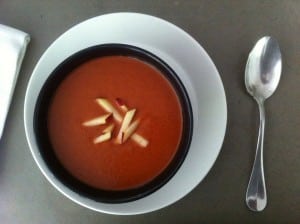 Other times, you start with some ingredients and allow whatever urgency they may embody (like: if you don’t use them up by Tuesday, they will rot) to fuel your efforts. Your creativity is not inspired by an imagined goal but generated by the material present.

If Plato and Aristotle had had a cooking show, they could have argued over which approach was nobler, though nothing would have come of it. Halfway through, Plato would have stormed out. He disliked creative endeavors of all sorts.

Not that you should take my word for it. Although I majored in philosophy, I basically rented a mental storage unit the year I graduated, and moved all my excess ideas into it. I’ve since lost the key. 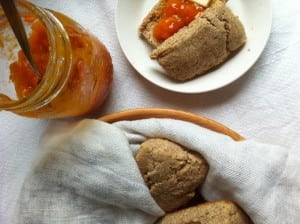 Nonetheless, a memory of the old philosophers was haunting my thoughts the other morning when I opened my refrigerator door and discovered an ontological (or was it empirical?) crisis. In my hand was a bag of new, fresh carrots from my CSA. In the crisper were several dozen other carrots – some cracked, others quite flimsy.

I quickly tossed in the new ones and shut the door, but too late: guilt was swelling inside me. I hate allowing food to go bad. I hate being cavalier about waste.

All that day, I thought about what to do with the old carrots. Like all root vegetables, carrots are so hardy that they seldom become completely inedible. But a carrot without its crunch is definitely a compromised carrot.

Of course, I realized I could make carrot-ginger soup. Carrot-ginger soup has been a staple of hippie restaurants and high-end eateries alike since the 1980s. And, yes, it is good, but the very thought of it bored me. I’ve had carrot ginger soup too many times. 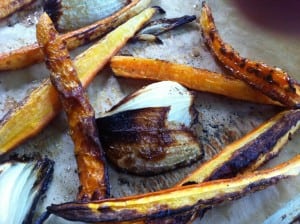 Finally, I pulled out the old carrots and set them on my counter. A few were so far gone they went straight into the compost. The rest I stared at. At last, I queried them: What do you want to become?

As it happened, I had just recently pulled a pan of sliced peaches from the oven. I’d taken a risk buying peaches this late in the season, and lo, they were mealy. But roasting them fixed that! Their flavor became lush and concentrated, and, instead of turning to mush, as they would have if I’d sautéed them, they were silky-firm in texture.

Did the carrots want to give it a go? We debated the pros and cons, and eventually agreed that they did. So I washed them, cut the thick ones lengthwise, tossed them in olive oil and salt, and arranged them on the same baking sheet. In they went, along with a couple of quartered onions and a beet that had gotten separated from its mates. I forgot about them for awhile, and by the time I pulled them out the smaller ones around the edges had started to burn. No matter: they all tasted great – rich, caramelized, and slightly chewy.

Into a big pot they went, along with some broth and, yes, some grated ginger (I debated using cumin or curry instead or as well – both are wonderful with carrots. But I had lots of ginger in my fridge, so it won out.) Ten minutes later, I dumped everything from the pot into my blender, and blasted it until it was completely smooth.

Thanks to the beet, the color was stunning, like a ripe papaya. But the flavor was a little flat, so I added a raw, tart apple that was too gnarled for my kids to eat. It was just what the soup needed. That and a $100,000 philosophy degree, which had allowed me to engage some wizened old vegetables in a fruitful Socratic dialogue.