On Sunday, Oct. 6, as part of their Writers Reading at the Library series, Butterfield Library will play host to a number of writers whose prose and poetry is included in the new anthology A Slant of Light: Contemporary Women Writers of the Hudson Valley, recently released by Codhill Press. 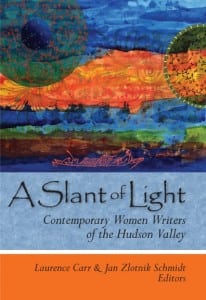 A number of Philipstown writers, among them Irene O’Garden, Jo Pitkin and Michelle Woods, will read their entries, accompanied by others, including Lucia Cherciu and Judith Saunders. Also attending the free, 3 p.m. event, will be the collection’s editors, Laurence Carr and Jan Zlotnik Schmidt, both English department professors at SUNY New Paltz.

A Slant of Light gathers and celebrates contemporary prose and poetry from about 106 women (more than 150 authors submitted a total of over 500 works for consideration), of differing ages — from students in their 20s to women in their 60s and 70s — ethnicities and locales, extending from Sleepy Hollow to Albany, along both banks of the river. The book is already halfway through its second printing run, with a third likely.

A Slant of Light is divided into five sections, each addressing a theme of women’s lives. Press notes relate that the book “begins with Mythos, representations and revisions of myths on women. The second section, Body & Gender, explores visions of the body, gender socialization and the roles of women. The third section, Identity, examines both how women see themselves and how others see women. The fourth section presents women as parents, children, partners and lovers. The last, Woman in the World, shares works that meditate on our collective fate in a global world.”

The notion of segmenting work into themed sections arose early on, although writers submitted works not knowing of the eventual structure. Carr says, “This evolved very early. As we started reading we knew we had to have it concentrated, and we decided to divide it into sections to make it more manageable.” Schmidt says the organization of the book “gives it coherence. Also the pieces play against each other more directly, creating a conversation.”

Once the writers found out about the themes, most were able to figure out their placement, “There was a lot of ‘Oh, you’re doing those sections — I bet I know which one I’m in,” says Carr. “We were careful that the themes remained expansive,” explains Schmidt, “We interpreted the themes broadly, yet we were seeking themes that reflected phases and stages in women’s lives.

Carr has put together two previous anthologies, Riverine, a contemporary anthology of memoir, short fiction, and poetry by more than 70 Hudson Valley writers, and WaterWrites, an exploration, tied in to the Hudson’s Quadricentenntial, by Hudson Valley writers of what it means to feel connected to that river. Carr enjoys bringing together what can be quite disparate communities of regional writers, many of which rarely connect.

“There are distinct Albany groups,” he says, “and Saratoga Springs groups, New Paltz, Westchester, Woodstock. When we get together, the work creates a real bond and is one reason I love doing these anthologies. We celebrate each other and expand the circle of writers. There’s a definite Hudson Valley community of writers, thousands, and we were trying to bring together a collection of communities that goes beyond local borders.”

Asked if they had gleaned a particular Hudson Valley “voice” or, more specifically, a Hudson Valley ‘women’s voice’ from their readings, Carr said “throughout there are references, some cloaked, some overt, about the region, but we weren’t going for it [as editors]. And the answer to that question is yes, no, maybe. We’ve found extremely independent voices, some with an urban edge, because of the many transplants here, others a rural reflection — some have lived here for generations and are people of the land. Both foster independent writing. There was not much warm and fuzzy stuff going on; there are lots of individualists, reflecting what is going on in women’s lives. Schmidt noted that there “was some overall focus on women’s relationship to the natural world.”

Cold Spring’s Jo Pitkin, whose work was also included in Riverine, first met Carr at a small press fair. Having put together readings at Butterfield since 2002, she organized one for Riverine and is pleased to be doing so again for A Slant of Light, echoing the editors’ thoughts that it’s a “great vehicle for us writers to meet each other.” Pitkin likes “the mission of this anthology: these poems really bring out important things about women’s lives.”

In a coincidence with another literary event taking place in Cold Spring next week, when Pitkin first moved to this area in 1995, she went to a T.C. Boyle (see accompanying story) book signing at the now defunct Salmagundi Books on Main Street. “I thought things like this would be a regular occurrence,” she says, laughing, “there wasn’t another visiting writer here for the next seven years, so I decided to partner with the Butterfield Library in 2002 to host one or two readings a year. I’ve done that more or less since, inviting writers from the Hudson Valley and beyond to read at the library.”

The editors hosted their first reading two weeks ago in Woodstock. The Butterfield event is one of six, at bookstores and libraries, which will launch the book. “It was so great to hear people reading their pieces,” Schmidt said. “I was struck by the creativity of women in the Hudson Valley; it’s wonderful to see the beauty of the work.”