At 1:50 p.m. on Sunday, Nov. 3, the Cold Spring Fire Company, North Highlands Fire District, Philipstown Volunteer Ambulance Corp, and Medic 1 were dispatched to Breakneck Mountain for a 27-year-old injured female hiker. After a 45-minute hike, the collaborative rescue-team of 11 first responders reached the injured woman and determined she had a severe injury to her leg and ankle.

It was determined by the rescue team that carrying the victim would be too dangerous for both her and the first responders. Based on the extreme elevation, deteriorating conditions in time of day, and the injury, the rescue-team deemed the only option a helicopter pick-off. Calls were placed to the New York Police Department and Coast Guard for helicopters. However, due to the New York City Marathon, they were unable to accommodate. The New York State Police viewed the area with a fly-over, but it was determined they could not assist.

After several hours of unsuccessful calls for a helicopter and fallen temperatures, the rescue-team ignited a small controlled burn in an attempt to prevent hypothermia for both themselves and the patient. 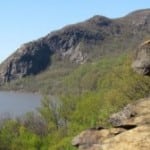 A view of Breakneck Ridge from the cliffs at Little Stony Point
Photo by M. Turton

After four hours on top of Breakneck Mountain, the West Point Fire Department agreed to assist. Two West Point firefighters were lowered onto Breakneck using a helicopter and assisted with packaging the patient for the pick-off. After 10 minutes, the patient and the two firefighters were hoisted into the helicopter and were lowered onto 9D. At this time, the 11-person rescue team, along with two additional civilians made a 30-minute journey back down Breakneck. The conclusion of the call was 8:30 p.m.

In a comment posted at Philipstown.info, the hiker, who was transported to Saint Francis Hospital, extended thanks to the first responders: “A sincere thank you to all of those who helped with my rescue on Sunday. From the sherpas, to the National Guardsmen, Volunteer firemen, EMTs, and West Point pilot and rescuers … you all saved my life. Words cannot express how much I appreciate every one of you who not only climbed the 1,100-plus-foot range, but carried me the extra 300 feet to the top. You waited with me and put up with my obnoxious screams and cries for over five hours in the dark, cold, and windy conditions without food or water. You all truly are heroes & I will never forget your kindness. Thanks to Joe ( ? ) who offered his rescue jacket even though he was shivering! And a very special thanks to Fire Chief Matt Steltz and EMT Josh McCarty for taking the time to talk with me and keep my spirits up during this incredibly painful and embarrassing experience. Besides my life, I owe you all a few drinks!”

This story updates an earlier version.