Police spend 14 hours trying to talk him out of it

A 14-hour stand off ended in a suicide by gunshot on Sunday (Dec. 8) at the Countryside Motel on Route 9 in Philipstown. According to the Putnam County’s Sheriff’s Office and the New York State Police, Mark Reid 47, shot himself after police mounted a prolonged effort to have him surrender. Reid had barricaded himself in a motel room with a shotgun threatening to kill himself. 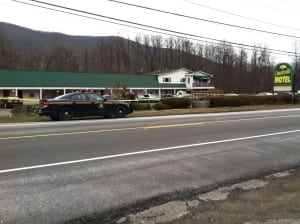 Police sealed off motel area while negotiating with an emotionally disturbed man. (Photo by K.E. Foley)

Town of Poughkeepsie police had originally put out a bulletin asking for assistance in locating an armed emotionally disturbed man. A Sheriff’s deputy responded to the motel Saturday night at about 9:45 p.m. where Reid had apparently made his presence known. After ascertaining that Reid was there the deputy called for assistance.

Police sealed off the area, evacuated the motel and closed Route 9.

Crisis negotiators from both the Sheriff’s office and the State Police then worked through the night to persuade Reid to give himself up peacefully to no avail.  He shot himself at around noon on Sunday.

“While I am certainly grateful that neither any law enforcement officer nor member of the public was injured as a result of this incident, it is truly sad that this man was so emotionally distraught that he took his own life.  Our condolences go out to his family and friends,” said the Sheriff.