Reporter’s Note: After the first article in this series I was approached by a former heroin user. Irene (not the person’s real name) thanked The Paper for doing the story but took issue with a quote it contained from “Len” who compared heroin withdrawal to waking up with the flu every morning. “It’s not anything like having the flu,” Irene said. “It’s a thousand times worse.”

Steve and Susan Salomone understand the deadly risks associated with heroin. Their 29-year-old son Justin died of an overdose. The Mahopac couple now runs Drug Crisis in Our Backyard, an organization devoted to “increasing public awareness of the rampant use of opiates in our community.” They tell their story regularly at forums on drug addiction across Westchester and Putnam Counties.

“Justin was pretty uncomfortable in his own skin,” Susan said, adding that his discomfort led him to begin smoking marijuana at age 16. While at college he turned to more serious drugs including cocaine. “He started taking Vicodin, Percocet and OxyContin when he was 23,” she said. “Then he switched to heroin because of the (lower) cost.” 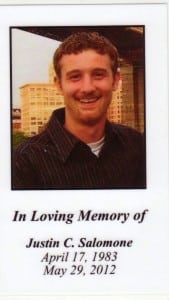 Justin’s death was not for lack of trying to get healthy. “He recovered several times between the ages of 23 and 29,” Susan said. “The first time he got clean we thought we were done.” But they were far from done. “He’d be sober for three or four months at a time — and then relapse.”

Speaking at a Feb. 19 drug forum at Haldane organized by Putnam County District Attorney Adam Levy, Steve Salomone told the audience of about 60 people, mainly parents, that Justin died of a heroin overdose in May 2012 after having suffered brain damage from another overdose the year before. He described life during Justin’s addiction as “hell.”

Salomone said that heroin is not “a bad decision” but a disease that must be treated. After their son’s death the Salomones told their story in an open letter to the Mahopac News. “The phone rang off the hook,” he said. It was then they decided to form an organization to promote awareness of the dangers of opiates, in memory of their son.

Enforcement and a lost program

The NEU includes four investigators and five undercover deputies. Senior Investigator Mark Gilmore has worked in the unit for nine years and responds to tips received on the sheriff’s drug hotline 845-225-DRUG. “We get a lot of general information but also fairly detailed leads that we can build a case around.” Details are important. As Gilmore put it, a caller stating “there’s a drug problem in Philipstown” doesn’t do much good. Callers can leave an anonymous message but many identify themselves. “You’d think people wouldn’t stick their neck out — but they do,” he said. “It gives them a sense of security that they’ve taken a stand.”

George Kane, Officer-in-Charge of the Cold Spring Police Department told The Paper that CSPD doesn’t have the resources to investigate high-level drug cases — including heroin dealers. “We have to rely on the sheriff’s department and we work in conjunction with them,” he said. “We know heroin is there and it’s getting big. “Kane said that with one officer on duty — in a marked car — it’s difficult to respond effectively to calls concerning drug deals.

Philipstown used to have a more proactive form of police work. Barbara Rifenburg-D’Alessio, whose two children attended Haldane, said that the loss of a School Resource Officer (SRO) several years ago was a blow to the community. That program, funded by the sheriff’s department, stations a uniformed sheriff’s deputy on campuses during school hours. An SRO serves as combination educator-law enforcer-counselor.

When the county reduced its funding, Haldane ended the program. “Officer Mooney understood the kids — and there was mutual respect,” Rifenburg-D’Alessio said. “He could tell kids that something was not a smart choice — that they have other choices.” Schools in Putnam County communities such as Carmel, Brewster, Mahopac and Putnam Valley still participate in the program.

While the need to treat addiction as a disease is gaining recognition, those convicted of heroin possession can still find themselves in prison. Depending on the seriousness of the offense, a defendant convicted in New York State can serve up to 20 years — or pay a fine of up to $100,000.

He is a big supporter of drug treatment courts, first developed in Florida in 1989 in response to widespread use of crack cocaine and the endless cycle of addiction and chronic criminal behavior associated with its use. Steiner said the drug courts “turned the court system upside down” by stressing rehabilitation rather than punishment.

In drug courts, non-violent, addicted offenders can plead guilty then participate in court-supervised treatment. Defendants who successfully complete the program can have charges dismissed or reduced or receive a reduced sentence. By 2013 there were 148 drug treatment courts in New York State — including one in Carmel.

Dr. Frederick Hesse, medical director at Arms Acres, a rehabilitation facility in Carmel, explained the nature of heroin addiction in an email to The Paper. “When someone uses opiate pain medications or heroin, receptors in the brain are over-stimulated, and the brain makes more receptors that will need more of the opiate with repeated use,” Hesse said. “Once tolerance (to opiates) builds up, any sudden drop in the dose will cause intense symptoms of pain, aches, sweats, cramps and diarrhea.”

By then brain chemistry has changed and an addict no longer seeks drugs to get high, but to avoid being sick. The need for the drug becomes a survival instinct. “Patients feel a drive for opiates similar to the intensity of hunger and thirst,” Hesse said. 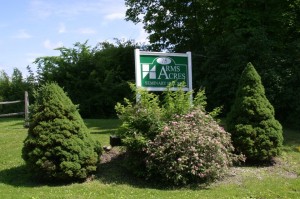 Hesse said that lives can be saved in an overdose situation by having an emergency kit on hand. “An emergency treatment of naloxone can be injected, similar to an insulin or flu shot,” he said. The New York State Department of Health distributes emergency kits including the drug, instructions, and training. Family physicians can also prescribe naloxone.

Next week, the final article in this series will include information on who drug users, their families, friends and communities can turn to for help in dealing with drug addiction.

2 thoughts on “Part III: Responding to the Heroin Epidemic”