A week after residents voiced reservations about the proposed installation of a cellphone tower at the old landfill, Town Supervisor Richard Shea reiterated his intent to proceed carefully, aware both that the idea might prove feasible — and generate appropriate income — and that it might not.

Now home to the town recycling program, the landfill lies off of Lane Gate Road, above Route 9. A cellphone “dead zone” along that stretch of highway prompts desires by the industry to install a tower. During a March 26 presentation to the Town Board, a representative of Homeland Towers, a firm that installs the structures for such carriers as AT&T, proposed locating a tower at the landfill in return for supplying an unspecified amount of rent as well as a new town generator. 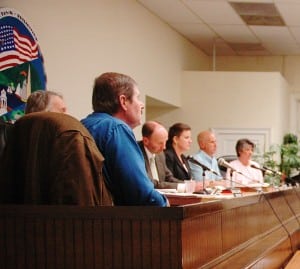 At the Town Board’s formal monthly meeting April 3, when landfill neighbors demonstrated resistance to the tower concept, Shea promised ample opportunity for residents’ involvement as the board weighs its options. “It’s not the sort of thing where we’d want to make that decision without public input,” he said.

Nonetheless, he also repeatedly declared that a cell tower will probably go somewhere near the landfill and that it makes sense to put it there and earn money for the town government.

“We have a former landfill that is not utilized” to any extent, Shea observed. “It could generate some revenue for us. So we’re cautiously exploring putting a cell tower at the landfill. Whether or not the town does it,” the tower “could be put on private property.” Town officials “would hate to see” a case where “we lose that revenue while the cell tower still goes in and we sort of lose control. One of the other benefits would be that the emergency services antennas could go on this, our highway radio tower could go on top, the county could get space” on the tower as well, and Homeland Towers “offered a generator, which we currently don’t have up there” for emergency services when electrical power goes out.

Councilor Nancy Montgomery pointed to another emergency services issue, the difficulties that arise during a road accident or similar incident if volunteer responders’ phones fail. “It becomes a liability for the town when it’s a dead zone,” she said.

Supervisor Shea assured the audience that the board members “want to go into this with eyes wide open. The last thing we’re looking to do is disturb people or put a cell tower in somebody’s backyard.”

However, he cautioned, “A lot of the time it’s tough to stop these things” if cellphone carriers want to go ahead. “New York State has a mandate for coverage. With the mandate, they can supersede municipal law. They can supersede local law.” He said that in town government “there is nobody pushing for this.” Nonetheless, he also emphasized, “if it’s going to happen anyway, what better place than the former landfill, a place to generate income for the town? If it’s going to happen in that corridor, why not gain some benefit out of it?”

Neighbors provided their own perspectives.

Steve Sterling, who lives on Lane Gate Road, warned that “cell tower companies are not really community service companies” and that the cellphone businesses are “some of the most profitable in America.” Overall in the industry, “these companies are very aggressive and they do have mandates,” Sterling said. He noted the ambiguities of the situation. “We’re all driving down the road saying, ‘Oh geeze, I lost my cell service.’ We all want it. But it’s not that everybody wants it in their backyard, either.”

Another Lane Gate Road resident, Clive Bullard, told the board that his yard is next to the landfill. “I’m very concerned,” he said.

Councilor Dave Merandy said that when Town Board members surveyed the landfill as to its suitability for a tower, they focused on residents’ interests. “I think on our visit that was our main concern.” And the board is nowhere near a decision, Merandy noted. “It’s really just at the beginning stage.”

Six days after residents and the board discussed the matter, Shea, Merandy and Councilor Mike Leonard met in a workshop and talked about the cell tower again, recalling the residents’ feedback and expressing uncertainty about how much money the town might actually receive in a deal.

“It’s probably far from a sure thing,” Shea said April 9. “So if it’s not worth it, it’s not worth it.” But the board will pursue the subject further, confer again with Homeland Towers, and “see what they come back with, what it looks like.”