The leftovers that wind up in my refrigerator make sense to me. I know their backstories; I know why they’re there. Typically, they have earned their leftover status due to either a miscalculation — the quantity of food I prepared was out of sync with the hunger and/or quantity of diners — or a shrewd, ulterior calculation: I wanted leftovers, so I purposefully made way too much food. (Though ever since my boys turned into teenagers, such schemes have grown increasingly unreliable — “way too much food” often turns out to actually be way less than enough.) Even the forgotten or neglected stuff — the pasta sauce I was planning to use for Tuesday’s supper but didn’t and subsequently forgot about — is merely depressing, never gross. 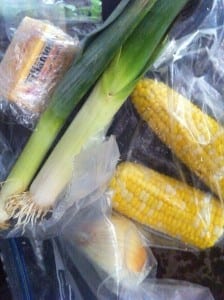 Not so a refrigerator full of other people’s leftovers. Their cold stew is indisputably creepy — what have they done to it? — their container of cooked peas weirdly disconcerting. Even the small, dark crust around the mouth of their ketchup bottle is not like the crust around my own ketchup bottle. The former is nasty, quite possibly toxic, the latter merely dried-out ketchup.

I know this is not rational, but I can’t help it.

Still, sometimes if I work really hard, I am able to temper my repugnance. And just such a Herculean effort was required of me this week.

We arrived in New Hampshire late Sunday night, having turned a six-hour drive into a nine-hour drive through a combination of long, lazy stops and an almost uncanny knack for getting stuck behind the slowest drivers in whatever county we happened to be passing through. I was cranky by the time we drove down the long, birch-lined driveway leading to the 19th-century farmhouse that belongs to Peter’s extended family. By “extended” I mean extended: the house has been in the family so long that 51 relatives now spend some part of their summers here, and have worked out a remarkably smooth and sensible system for dividing up time and getting along.

One of the rules is: No leftovers in the fridge. Not even condiments. No matter how delicious or dear your grilled skirt steak with corn salsa, if you can’t take it with you, you must throw it away before you leave. The result is that when you arrive at the house to begin your own sojourn here, you can expect salt and oil and cinnamon, toilet paper in the bathroom and dish soap by the sink, and not much else.

But on Saturday, the day before we arrived, the departing family had celebrated a big birthday, with more than 40 guests, so not only were there leftovers galore, but these leftovers were meaningful. To them. The birthday boy (he just turned 70, but “birthday man” doesn’t sound right) hoped that I would accept them as my own — which is a bit like expecting a stranger to find your children as charming as you do. At 10 p.m., with haloes of headlights still blotting my eyesight, I found myself going through the contents of two refrigerators with my husband’s second cousin once removed. Leftover chicken tenders: no way. Three kinds of cake and eight quarts of ice cream: Heck yeah. Grilled pork with peaches, ziti with sauce, white bean salad: why not? The containers of green salad: Ew, no, like, what were you even thinking putting dressed salad in the fridge?

Yesterday, the boys had cake for breakfast, and we all sat down to someone else’s leftovers for supper. They were fine. We didn’t die.

Today, I set myself to the task of turning the remaining vegetables, some stale bread, and a whole lot of heavy cream into a meal. I made a savory bread pudding to go with some grilled chicken. Because the best way I know to make someone else’s leftovers palatable is to cook them up into something totally different — to create, in other words, soon-to-be leftovers of your very own.

The basic proportions of this dish can be applied to just about any combination of (leftover) vegetables, cheese, and bread(s).