Do you think classical music performance is well represented in the Hudson Valley?

I think [it] is well represented in the Hudson Valley: There’s the Hudson Valley Philharmonic, the Chapel Restoration concerts, as well as series in Poughkeepsie, Cornwall, Newburgh and Beacon. Schools north of Beacon have great string programs. One of the things I love about Cold Spring and Garrison is that I have been met with a deep appreciation for classical music and a hunger to hear more of it. There are many amateur musicians who get together regularly and play.

My experience of this community is that it likes to support its own, and professionals in all the arts are valued. The level of professionalism is high even among amateurs, and respect abundant, which is a wonderful environment in which to live and work. The live experiences of the performances, openings and conversations nurture our minds, hearts and souls, and it makes for a vibrant community. In this sense I don’t think you can have too much classical music; rather, inspiration for people to generate events, such as this, that allow participation where their desires lead them, is vitally important.

Is there an importance, symbolically or otherwise, to devoting a full weekend of associated performances at a place like the Depot Theatre?

Having a music festival is always a great way to generate interest. A lot of people in this community are weekenders and a festival like this might lure others who are attracted to this area. I think when you saturate yourself with an art the result is a deeper enrichment, and these concerts are so varied that there’s something for everyone and will give satisfaction in the overall experience for the audience member who chooses to attend all of the concerts. 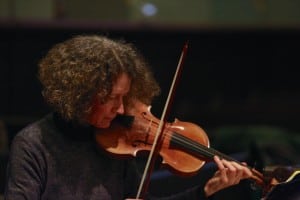 It’s wonderful that it’s right here in the community — we don’t have to go far away to have the experience of a mini musical vacation!

Why have you chosen this particular program? What will appeal to an audience consisting of potentially both devotees but also newcomers?

The Sunday afternoon concert of flute, harp, viola and violin will be like a trip to a botanical garden for the listener. The pieces cover a range of expressions from timelessness and expansion to dances and exuberance. The choice of the instruments (flute, viola, violin and harp) was to give as varied a palette as possible. There was also a selfish reason, which is that although Joy Plaisted and I grew up in Minnesota with the same youth orchestras, then years later Juilliard, then many years later found ourselves living here in the same village, we have never given a chamber concert together and it’s something we’ve wanted to do for quite a while!

I have known and played chamber music with the flutist, Andrew Bolotowsky, for many years in ensembles both contemporary and baroque on original instruments. Another strong connection is that both our parents were at Black Mountain College, mine as students, his father as a teacher.

Can you describe one of the less well-known pieces you will play?

I chose the Sofia Gubaidulina’s Garden of Joy and Sorrow because I wanted to bring this beautiful, evocative piece forward now as mankind faces difficulties on many fronts. Feeling and experiencing the oneness of life in music can be an important way to bring this understanding home to our hearts. Two of my close friends died in the fall and my experience of their passing, while painful, also had a joy knowing their suffering was over and that relationships continue.

Gordon Stewart’s passing was felt by the whole community. I’d like to think that the vulnerable state we are in after such experiences make it possible to come together and appreciate things about each other and ourselves in ways that could open communication and compassion where it might have been difficult before. According to Gubaidulina, her composition was “conceived under the strong influence of two directly contradictory literary phenomena: 1) the work Sayat-Nova by Iv Oganov (Moscow), about the famous Eastern storyteller and singer, and 2) verses by the 20th-century German poet Francisco Tanzer. Vivid Eastern color was counterposed to a typically Western consciousness.

But both of these works had significant inner similarities: their contemplativeness and refinement. Tanzer’s poem about boundaries is read at the end.  Gubaidulina is a Russian composer made known to the world by violinist Gidon Kremer and who has had premieres in the all of the major cities of the world with major orchestras, ensembles and soloists. I was fortunate to find this piece a long time ago and performed it a lot in the New York area and beyond.

And the other composers?

Arvo Pärt is a wonderful Estonian composer who is more of a minimalist. Spiegel im Spiegel is a beautiful meditation. I expect that the other composers represented — Joan Tower, Vaughn Williams, Fauré, Ibert and Vivaldi — are known to the audience.

Do you think some people are “scared” of attending classical music performances, or let’s say, intimidated? Why shouldn’t they be?

I have never thought of people being scared of attending a classical music performance! Ideally it’s a place where one’s heart can rest in the balanced rhythms of nature set in sound. To me classical music at its best uplifts individuals by reflecting the genius of a composer in the mind of the listener. Genius, beauty and balance exist in the listener and performer but often are not awakened without the experience of an artist or composition.

Further, great music never gets old to the person who appreciates it, so for the people who have never delved into classical music, by all means go for it! One’s appreciation continues to be enriched as life unfolds, and even repeated hearings of a composition over time carry new meanings and bring new joys.

One thought on “A Q-and-A With Rachel Evans”