Combined with Hendrick Hudson for deepest playoff run yet

Every season can’t end with a championship. But for the eight Haldane players who teamed up with Montrose-based Hendrick Hudson High School to form a blended hockey team, the 2014–15 season will be remembered with satisfaction — once the sting of a season-ending loss subsides. The Hendrick Hudson Sailors lost 3-1 to the Ryetown-Harrison Titans on Feb. 27 in the Division II Section I semifinal to end the season with a record of 12 wins, nine losses and one tie.

“It was a close game,” Sailors Coach and Cold Spring resident Mike Grean said. “But they [Ryetown] came out with a bit more of a jump.” It could have been even closer but Grean said the Sailors missed a glorious scoring opportunity late in the third period. With the Titan goalie totally out of position, a shot at the all-but-empty net clanged off the goal post. “It was a great effort,” Grean said. 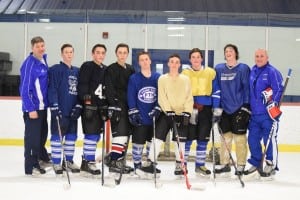 The Sailors will lose six seniors next year, including two from Haldane, Ramsey Heitmann and Jacob Cox. Grean said he plans on being back as coach, as long as he receives a favorable performance review from school officials. In the playoffs, “we ended up in the top four out of 16 teams,” Grean said. “It’s the deepest we’ve ever gone …. I think I can hang my hat on that.”

The final loss to the Titans was hardest on the seniors, whether from Haldane or Hendrick Hudson. “They were sad. It was their final game but I let them know it was a great season, and that they went further than the team ever has before.”

Grean is a Level 5 coach, the highest certification granted by USA Hockey, enabling him to help conduct clinics for coaches working their way up through the system. Apart from their winning record and playoff run, Grean said the most satisfying aspect of the season was the way the players from the two schools jelled into a cohesive unit.

“This was our second season with a combined team,” he said. Laughing, he added, “In soccer these guys hate each other,” but the players began to mesh. And his biggest challenge wasn’t players from two schools who are otherwise intense rivals. “It’s getting them to stop talking, to listen to their coaches — and to focus.”

Another factor was the age range of players: grades eight through 12. “We don’t have the benefit of a junior varsity or modified team,” Grean said.

Geography added a challenge. With no hockey rink in either Cold Spring or Montrose, the Sailors never enjoyed a true home-ice advantage. They practiced and played home games at Ice Time in Newburgh.

Garrison resident Jill Heitmann had two sons on the team – Dan, a junior, and Ramsey, a senior, both students at Haldane. The older Heitmann scored the insurance goal, assisted by his younger brother, in the Sailors’ 3-1 final win of the season over Pawling. Their mother echoed Coach Grean’s observations on the blending of players.

“It was a bit uncomfortable at first,” she said, adding that it helped that many of the boys knew each other from other hockey teams. She likes the way the team came together. “Now it’s a great combination, and the Haldane kids are so happy to be playing high school hockey.”

Ramsey agreed with his mom: “We’ve really bonded as a team.”