During the public hearing on the proposed 2015–16 budget for the Village of Cold Spring on April 14, Michael Armstrong suggested moving the village election from March to November, an idea that was discussed by the previous village board. During Mayor Ralph Falloon’s tenure, trustees did vote to have Putnam County run the March 2015 election but stopped short of changing the date to November.

“One of the biggest and almost always overlooked reasons the Village Board has such a hard time tackling the toughest (budget) questions … is the calendar,” Armstrong, a village resident, said. “This board, elected in mid-March, with three new members, will own a budget they have had no hand in making. Change the election date to November and the problem is solved,” he asserted.

In an email to The Paper, Armstrong pointed out that such a move would save taxpayers money since Putnam County absorbs the cost of running November elections. In contrast, the village paid the county $5,000 to administer the March election. Armstrong also suggested that a fall election would “boost voter turnout,” because it would be held in conjunction with state and national elections.

He added that changing the election date would give trustees time to consider priorities outlined in the 2012 Comprehensive Plan and to receive public input prior to establishing the budget. Armstrong said that strategy would create “consensus on the big opportunities, such as the best way to provide police services.”

Cold Spring resident Kathleen Foley had a different view. “The beauty of a March election is that we don’t get consumed in all the ‘hoo-haw’ of a national election,” she said. Foley suggested that holding the election earlier than mid-March would permit a better discussion of budget issues.

Mayor Dave Merandy said that the board would consider the pros and cons of changing the election date.

Village officials have received a draft agreement from the New York City Department of Environmental Protection (DEP) that will enable Cold Spring to temporarily take its water from the Catskill Aqueduct, which supplies water to NYC. That measure is required in order to make repairs to the village-owned dams at the upper and lower reservoirs located on Lake Surprise Road. The reservoirs must be lowered significantly in order to complete the work. Greg Phillips, Cold Spring’s superintendent of water and sewer, told Philipstown.info that he hopes the project will get underway by this fall. 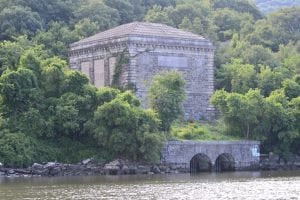 The Catskill Aqueduct supplies water to New York City and passes beneath the Hudson River, emerging at the base of Breakneck Ridge as shown here. Cold Spring will tap into the aqueduct in the fall while repairs are made to the village dams. (File photo by M. Turton)

The Catskill Aqueduct crosses the eastern edge of Nelsonville near the intersection of Fishkill Road and Route 301 — and the cost of tapping into it could be substantial. The price has not been determined yet, but a rate quoted in 2013 put the cost at more than $1,000 per million gallons. Phillips estimates that the village uses approximately 270,000 gallons of water per day. How long the dam repairs will take won’t be known until the design phase is complete, but Phillips said it would likely be “several months.” At the April 14 Village Board meeting, he hinted that restrictions on water usage might be imposed for the duration of the project in order to help curtail the cost.

Merandy told Philipstown.info that the New York Department of Environmental Conservation (DEC) has verbally agreed to extend until April 29 the deadline by which the village and the Cold Spring Boat Club must come to an agreement regarding the lease of the property, a step DEC requires before cleanup of toxic coal tar on the site can begin. The village owns the property.

The Boat Club, established in 1955, has eight years remaining on a lease that grants use of the site. Negotiations have been ongoing, including a proposal by Village Attorney Bill Florence that the lease be “suspended” for the duration of the coal tar remediation, to be renewed upon completion of the work. The Boat Club building will be razed as part of the project, and its leadership has asked that a 20-year lease be considered once the cleanup is done in order to facilitate financing of a new building.

The Cold Spring Village Board will hold a special meeting on Monday, April 27, at 7:30 p.m., at which Phillips will update trustees on a number of ongoing and pending water and wastewater capital projects. The board will also review the draft agreement with DEP for tapping into the Catskill Aqueduct.

The following night at 7 p.m., trustees will meet with the Planning Board regarding the plan of subdivision for three homes to be built on Paulding Avenue as part of the Butterfield development. The agenda will also include adoption of the 2015 budget and what may be final consideration of the lease agreement with Cold Spring Boat Club as it relates to the coal tar remediation project.

A community meeting to review the master plan for the Hudson Highlands Fjord Trail will be held at the Chalet on the Hudson on Route 9D at Breakneck Ridge on Wednesday, April 29, beginning at 7 p.m. Maps of the proposed trail will be presented along with results of an online survey that sought public input regarding the draft route presented last October. 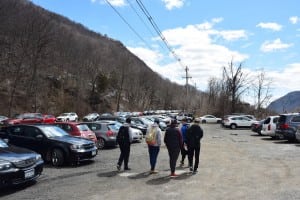 A meeting will be held at the Chalet on the Hudson on Wednesday, April 29, at 7 p.m. to review plans for the proposed Hudson Highlands Fjord Trail, which will connect Cold Spring and Beacon with Breakneck Ridge, a destination that has been called the most popular day hike in the country. (Photo by M. Turton)