Manitoga is now in the second year of its resident artist program. Begun in 2014 with visual and aural artist Melissa McGill and composer Ben Neill, invited artists experience industrial designer Russel Wright’s landscape, home and studio for an extended period of time and channel it into their own creative response. This year’s resident artist, Stephen Talasnik, is a sculptor who specializes in site-specific installations in nature — this one aquatic, taking place in the large quarry pond above which Manitoga’s buildings are situated.

Built at Newburgh’s Atlas Industries (where each piece is designed to fit through the doors, stairwells and elevators at the building), and assembled on-site at Manitoga, the work was installed in April. Talasnik’s structures, this one titled Sanctuary, are not thwarted or impeded by weather and other environmental conditions; instead they are purposefully intended to evolve because of these very things.

The piece is at its most vibrant when it is made, but once left to the elements, it lasts as long as it lasts. The piece is vulnerable to the same elements that are in a constant state of change themselves, nature. It is created, lives, and dies. There is a life span … [Sanctuary] is organized, engineered, and built for the moment. It is here for a short time, a temporary aesthetic, much like the seasons … I think that the spirit of Wright and of the natural environment is far more meaningful when we cherish the opportunity to examine the moment.

Talasnik believes “the responsibility of the artist is to take nature and drag it through their own personal experience with the objective of creating a new nature — an organic, near seamless synthesis of nature and personal knowledge.” As with much of his work, this sculpture is made (all by hand, with no computer modeling) of woven-reed structures, held together by repurposed stainless-steel fasteners. His work in these materials, often bamboo, can be connected with his past.

His biography at stephentalasnik.com describes him as growing up in a Philadelphia neighborhood “surrounded by oil refineries, shipyards, an airport, and a cemetery. As a child, he built roller coasters out of toothpicks, futuristic model cities out of discarded radio and television parts, and skyscrapers out of household product containers.” After attending the Rhode Island School of Design and the Tyler School of Art, and working as exhibitions coordinator at the Fleisher Art Memorial, Talasnik journeyed to Japan, invited there to establish an art and design program at Temple University’s Tokyo campus. 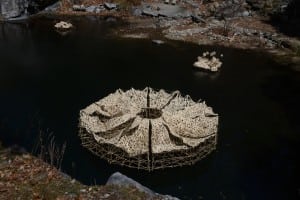 Teaching and traveling extensively throughout the Far East over a period of years, he studied “the craft of homespun engineering that utilized indigenous natural materials. He observed farmers build bridges, irrigation systems, and houses with reed, bamboo, and vine.”

Not previously aware of Wright’s connection to Japan (aesthetic and philosophical, and reflected in particular in the interior design of the home and studio), Talasnik said he “became curious about our mutual interests through the objects I discovered in his house and studio. After examining his collection, I realized we had intersecting passions.”

Just 14 years ago, Talasnik shifted from working in drawing form to dimensional design. His first small-scale structures were akin to architectural model making. According to his biography, “his first major installation was a commission from the Japan Society in New York City, invited as the lone non-Asian participant in a survey of contemporary bamboo art. His first large-scale, outdoor commission was from the Storm King Art Center, where he designed and built Stream, a temporary, site-specific bamboo structure covering three acres that survived an earthquake, hurricane and a winter of one of the worst snowfalls in recorded history in the Hudson Valley.”

Asked about what would appear to be a quick progression in scale and the complexity of his work, Talasnik said: “There is no standardized timeline for evolution. One develops at one’s own rate of time. Sculpture came to me after drawing for 25 years exclusively. It happens when it happens. What’s important is that if and when it happens, you’re ready.” 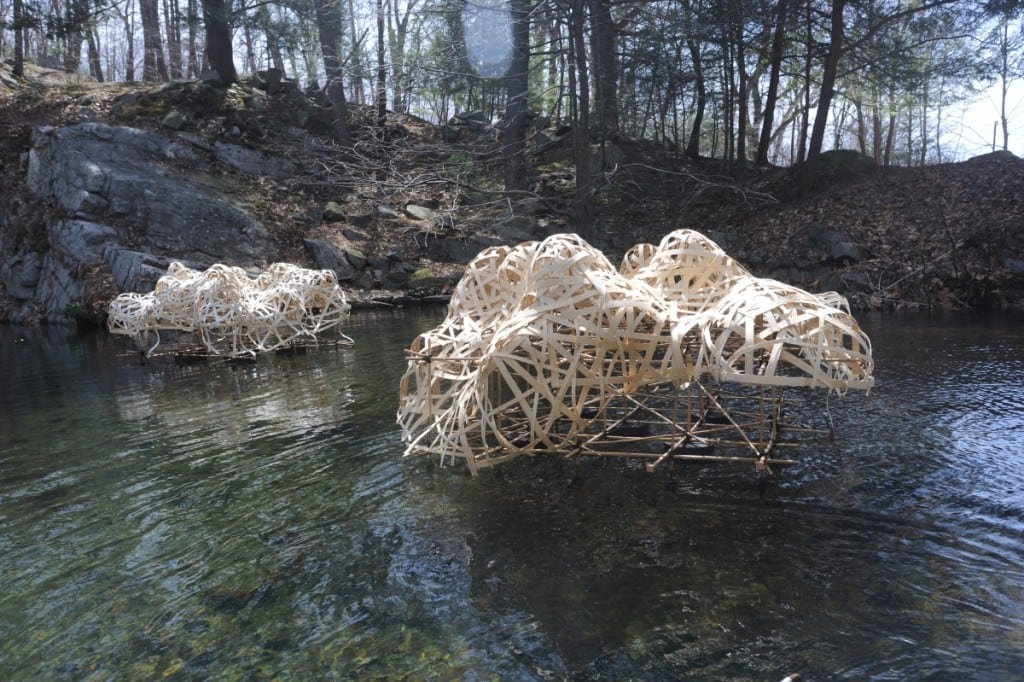 Talasnik, whose work is included in major international collections such as the Metropolitan Museum of Art, Whitney Museum, Centre Pompidou, British Museum and the Albertina, first viewed Manitoga on his own as a visitor; later, inspired by what he found, he proposed a collaboration. He wrote, “There is an intimacy to the choreographed environment that engages the senses. It compels the individual to confront an immediate and intimate space within a suggestively theatrical natural sanctuary.”

Allison Cross, Manitoga’s executive director, said of Talasnik’s work, “Similar to Wright’s intervention at Manitoga, Talasnik’s work occupies the intersection of art, innovation, science and nature and enters into a profound dialogue with place. Of the moment, it is variable and temporal, responding to the seasons and to changes in the environment.”

Special artist-led tours of Sanctuary with Talasnik are scheduled for May 30 and Oct. 17 at 1:30 p.m. Registration for these and other Manitoga events is available through brownpapertickets.com. There will be an opening celebration for Sanctuary for Manitoga members on May 9 from 5 to 7 p.m.

Sanctuary will be on view as part of Manitoga’s regular house and landscape tour, which is given twice a day on Fridays through Mondays, at 11 a.m. and 1:30 p.m. General admission is $20, seniors and students $15; reservations are needed. Tour participants should wear durable walking shoes and dress for the weather. Visitors meet at the guide house next to the parking lot located at 584 Route 9D, in Garrison.