Spring certainly came early this year. The hellebores have been blooming since February; early spring bulbs I planted a couple of years ago to give me a progressive show — crocus, muscari, scilla, chionodoxa, iris reticulata, daffodils — all exploded at once, followed immediately by erratically sudden forsythia. Even the lilacs are budding up ahead of schedule and April showers will soon bring a storm of spring flowers.

I’m aching to jump the gun in the kitchen, too, but the markets have yet to cooperate, and the chill wind manically whipping outside right now demands something warmer — something that walks the line between winter and spring, like a roast chicken with Mediterranean accent.

Running with that thought, I was reminded of an old Molly O’Neill recipe in which the breast of the chicken were stuffed with an artichoke puree before roasting and the cavity was stuffed with more artichokes and lemons.

The artichoke is a perennial vegetable in the thistle family, actually a giant flower bud that left to its own devices will burst into a large violet bloom on a par with the sunflower (to which it is related). The Romans referred to it as carduus (similar to cardoon, to which it is also related), and it is one of the oldest cultivated foods known to humans. 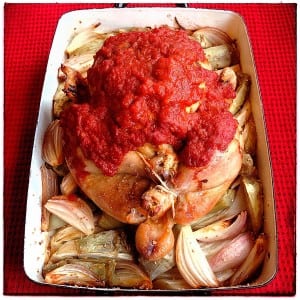 The artichoke was considered an aphrodisiac and thus the province of men alone until the 14-year-old Catherine de’Medici shocked the populace with a voracious appetite for them and introduced them to France from her native Tuscany. The French in turn introduced them to Louisiana, where they are still grown. But their home is California, where they were spread by the Spanish, and they are now a year-round crop with production spikes in the spring and fall. (Marilyn Monroe was the first official California Artichoke Queen, circa 1949.)

The artichoke “hearts” we buy, canned or frozen, are actually immature buds, sold fresh as “baby” artichokes. (The advantage here being that they may be eaten whole, the choke or fuzzy, thistly interior being undeveloped and much less troublesome than that fuzzy mass in larger globes.)

For this recipe, I made the artichoke puree from canned artichoke bottoms (the true hearts of larger artichokes, available at Foodtown or Adams Fair Acre Farms) for a smoother texture, abetted by just a couple cloves of garlic, olive oil, salt and pepper. I’ve added fennel, shallots and rosemary to Ms. O’Neill’s suggested stuffing as well as roasting the chicken on a bed of those same vegetables. For the last 20 minutes or so of roasting, this bird is topped with a rough, tomato-y diavolo sauce with just a pinch of cayenne and saffron, from those spring crocuses, for an extra Mediterranean sunniness.

Preheat oven to 450°F. Puree the artichoke bottoms in a food processor with garlic, 2 teaspoons of the olive oil, 1/2 teaspoon of the salt and pepper until smooth.

Toss the fennel, shallots and artichoke hearts with 2 tablespoons of olive oil and layer all but one cup of the mixture in a small (8-by-10 inch) roasting pan.

Carefully loosen the skin over chicken breasts, forming 2 pockets. Stuff the pockets with artichoke-garlic puree. Rub the skin with teaspoon of olive oil; season with salt and pepper. Fill cavity with quartered lemon, rosemary and reserved artichoke heart, shallot and fennel mixture, and truss with kitchen twine. Place the chicken on top of vegetable mixture and roast for 35 minutes in the bottom two-thirds of preheated oven. Check once or twice while roasting to ensure the chicken is not browning too fast.

While the chicken roasts, warm the tomatoes, cayenne and saffron in a small saucepan, smashing the tomatoes with the back of a spoon to roughly puree. After the chicken has roasted the indicated 35 minutes, spoon tomato mixture over the chicken and continue roasting, basting every 10 minutes or so until juices run clear when chicken is pricked in the thickest part of the thigh (at 25 to 35 minutes longer). Remove from oven and let stand for 10 minutes before carving. Serve each portion with a little of the artichoke puree and some of the roasted vegetables.