“I may wake up tomorrow and never make a rabbit again,” declares Judith Kepner Rose, but, if you are a gambler, don’t put any money on it. The sculptor has been making rabbit after rabbit and rabbit again for the better part of a decade. Now, 15 of her creature creations have come together, in an exhibition, Gathering of Rabbits, in the back garden at Gallery 66 NY in Cold Spring.

Kepner Rose was a potter initially, and the rabbits entered her realm of bowls and mugs almost surreptitiously, when she, for no particular reason she can recall, added a rabbit leaning over the edge of one of her pots, tail up. “People got really excited,” she recalls, “and I continued to do that for a couple of years until I realized I could just make rabbits.” 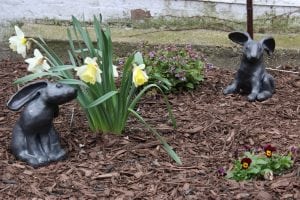 Spring is here: daffodils and bunnies (photo by A. Rooney)

The rabbits (technically, mostly hares) do things rabbits cannot do, which was intentional. “I want the creation to connect with the person viewing it, so my rabbits tilt, twist and turn, which is very unrabbit-like,” she explains. “Even without eyes, each has a particular tilt that beckons, ‘Come look at me’ … Nobody has ever questioned the twisting — it’s more like ‘That’s a cool pose.’ ”

Kepner Rose begins by taking a block of clay and carving the creature out, using wire and a loop tool. She sculpts until a bunny or bird emerges (crows and cormorants are favorite subjects). After adding detail around the eyes and ears, she hollows out the form. Usually each dries for three or four weeks before being fired, so it doesn’t crack or distort. “It’s remarkably slow and a very inefficient way to make a rabbit!” she says.

As in this show, Kepner Rose sometimes positions the rabbits so they appear to interact with each other. Sometimes she perches them on an object, a ball standing in for a rock, for example, so that she has the ability to get the rabbit into more adaptive positions. All of this may not be immediately apparent to people strolling into the garden, and that moment of surprise, when they start to examine what they are seeing more closely, is one of the joys of Kepner Rose’s work. 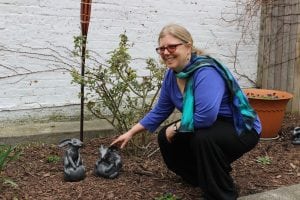 Judith Kepner Rose with two of her creations at Gallery 66 NY (photo by A. Rooney)

Though she’s never had a pet rabbit (nor dog nor cat — “I feed the birds,” she says), Kepner Rose has developed a fondness for them, even sculpting one titled “Hungry Bunny” with ribs showing after she learned that the Northeastern Cottontail was becoming endangered. Funnily enough, she rarely sees any rabbits in Cold Spring, but a colony of them have been spotted near the Garrison Art Center, where she does most of her work, sort of in the “If you build it, they will come” vein.

Kepner Rose, whose day job is working with community development organizations who create affordable housing, has been creating at the Art Center for a long time now.  “I’ve evolved from pots to sculpture,” she says. “I came in with no formal art education [besides some training at the Creative Arts Workshop in New Haven years ago], and it’s been a really comforting, warm, safe environment in which to explore.” Citing Deb Lecce, a studio potter based in Carmel, as a mentor, Kepner Rose says “it’s very much like a big family. And the pottery studio is a wonderful place; I love to set up in front of the windows and look out over the river.”

In 2015 Kepner Rose’s person-sized cement rabbit was a landmark on Beacon’s Main Street as part of Beacon 3D. One of similar stature graces the grounds of Cold Spring’s Manitou School. Her smaller works have been shown in galleries in Chicago, Denver and Tucson, and this June one of her works will be included in Menagerie at the Baltimore Clayworks.

Gathering of Rabbits runs through May 8. Gallery 66 NY is located at 66 Main St., Cold Spring.  For more information, visit judithkepnerrose.com or gallery66NY.com.

One thought on “Rabbits Gather at Gallery Garden”