A long walk goes through Philipstown and Beacon

When most of us shop for vegetables or dairy products, we think availability, freshness and price, especially price. What we don’t think about is the labor, the back-bending, often back-breaking work it takes to bring in a harvest of onions, tomatoes, eggplant, potatoes, blueberries or strawberries, not to mention caring for and feeding a herd of hundreds of cows.

And we don’t ponder much what doing such work should be worth — imagine for a moment what you would expect to receive for a 12-hour day in the fields. Would you expect a day off in the week? Maybe access to healthcare or housing with proper sanitary facilities? How about the right to bargain pay and benefits including raises for years of productive service? Wait, might such actions raise the price of my head of lettuce?

Last Tuesday night a group of farmworkers and their supporters walked into Philipstown all the way from Smithtown, Long Island after 10 days, on their way to Albany. Their goal is to bring attention to and ultimately a vote on state legislation, the Farmworkers Fair Labor Practices Act, that would provide farmworkers with new benefits and rights supporters assert would bring farmworkers to the minimum levels of other workers. 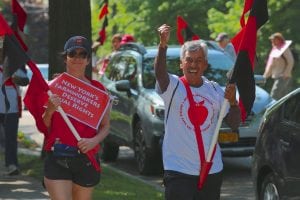 The bill, according to one of its main sponsors, State Sen. Adriano Espaillat (D-Bronx), would grant collective bargaining rights to farm laborers, require they are provided at least 24 hours of consecutive rest each week, and also extend overtime provisions to this industry. The legislation also contains provisions to include farm workers in a variety of unemployment and sanitary laws. The co-sponsor is State Assembly Member Catherine Nolan (D-Queens). The bill has passed the Assembly several times in the last few years but the Senate has not brought it to the floor for a vote, although it has passed with some Republican votes in committee, suggesting passage is possible.

The marchers stopped for the evening at St. Philip’s Episcopal Church in Garrison where church members, led by member Jim Bopp, greeted them with a hot meal and assigned places to stay for the night. Before retiring, some from the group spoke to an audience from the church, the local community and an ecumenical group of local clergy.

“The people on this march are those who are bearing witness to a situation that is really wrong,” said the Rev. Richard Witt, executive director of the Poughkeepsie-based Rural and Migrant Ministry, under whose banner the march was organized. “They are planting and harvesting the food we all eat. They are second-class citizens. For some reason they don’t deserve a day of rest.”

Of the march itself Witt said jokingly they had done a good job of holding up traffic in some places. “We have caused people to be jolted out of their dailiness,” he said. “I believe we are having an impact.” He urged his listeners to use social media to get the word out and have people contact their state representatives.

The group has 10 core members who are walking every step of the journey to the capitol accompanied by a floating pool of supporters and support staff. 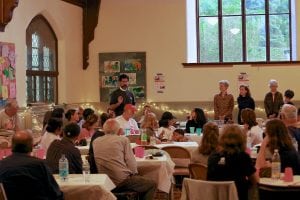 Two other speakers, Roberto Gonzalez and Pablo Cruz, shared their own hardships with long hours, little or no rest, no overtime for as much as an 80-hour week and sub-standard housing situations. At one point in his nine years in the fields, Gonzalez said: “I moved with nine people into a trailer built for six. It was infested with bed bugs, making it very hard to get any rest.” He said he worked 18-month stretch without a day off, often 75 to 80 hours a week.

Cruz, his weathered face reflecting 20 years in vegetable fields and 10 days walking many miles, said he had taken time off from this year’s work to join the march and the effort to convince the legislature to pass the law. He told of running into his farm boss at the market in Union Square, Manhattan as they were walking through. They didn’t speak. Cruz wondered aloud about getting his hours back when he returns.

Witt told The Current that the bill faced stiff resistance from the Farm Bureau, the state’s largest farmers’ organization. In a statement on the bill, the bureau said in part:

This bill would dramatically increase the cost of farming in New York State at a time when most residents are experiencing the same financial crisis as our farming families and worrying about how to afford food on their tables. This bill would have a tremendous impact on New York’s smaller farmers, while also putting tremendous pressure on the larger family farms that provide the bulk of the fresh New York-grown products we enjoy eating.

Nevertheless, Witt said the Senate appeared only two votes shy of a majority for passage. He said he thought Gov. Andrew Cuomo, who has made positive comments, could do more to wrangle votes as he did with the Marriage Equality Act and his gun control legislation. 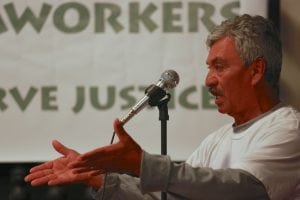 “We’re not saying farmers are bad,” Witt said. “This about getting farmworkers to the table on matters that affect their lives.” Witt also stressed that the majority of farm labor is year-round and not just seasonal, as is often claimed to argue against the purpose of the bill.

Asked about his and St. Philip’s involvement, Bopp, as he scrolled his cell phone making sure every visitor had a home to go to, said: “I think the treatment of the farmworkers is part of the stain of slavery. Here we are 150 years after the Civil War and still we have unequal treatment of people.”

Wednesday morning the group assembled at St. Mary’s of the Highlands Episcopal Church in Cold Spring and were joined by some locals as it began the trek up Route 9D toward a lunch rendezvous in Beacon.

One thought on “Farmworkers March for Equity”