The newest member of the Putnam County Sheriff’s Office, K-9 Chase, and his handler, Criminal Investigator Randel Hill, recorded their first official, successful track on Tuesday, May 24. Chase is an 18-month old bloodhound who recently completed his training. 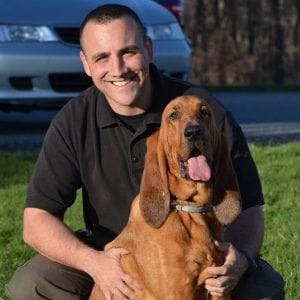 Chase and Hill were called at about 8:40 p.m. to assist members of the New York State Police who responded to a hiker who called 911 after she realized she had become lost in a wooded area of the Michael Ciaiola Conservation Area in Patterson. Chase picked up the hiker’s scent from her vehicle on Stage Coach Road. Hampered by the rain and darkness, not to mention an errant black bear, Chase nevertheless led Hill to the woman after a mile-long hike into the woods.

The department has set up a Facebook page for Chase at facebook.com/K9Chase.