It isn’t only sidewalk reconstruction that is disrupting life for shopkeepers on Cold Spring’s Main Street these days. A rash of burglaries, or at least attempted break-ins, took place on the night of Monday, June 6, and the early morning hours of Tuesday, June 7. Three of the incidents took place on Main Street and one on the riverfront.

Go Go Pops, located at 64 Main St., was one of the victims. Co-owner Greg Miller told The Current that he checked the shop on Monday evening “and everything was fine” but that by the time his wife Lynn, a member of the village board, came to work in the morning, “everything was not fine.” The glass of the entrance door had been broken and cash stolen from the register. 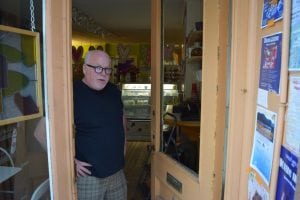 Greg Miller: “There’s no more stupid time to rob a shop in Cold Spring than on a Monday night.” (Photo by M. Turton)

It was not a great deal of money, Miller said, describing it as “the bank” for the startup of business the next morning. “The cost of the glass will be more than what they took,” he said. He was not impressed by the thieves modus operandi. “There’s no more stupid time to rob a shop in Cold Spring than on a Monday night,” he commented, adding that stores are no longer lucrative for would-be thieves since most transactions are done via credit and debit cards.

Miller said that Cold Spring Police responded quickly to his call. The investigation was then turned over to the Putnam County Sheriff’s Office.

Moo Moo’s Creamery at 32 West St. on Cold Spring’s riverfront was also burglarized. Owner Alexi Katsetos confirmed that his ice cream parlor was broken into and cash taken from the register. He declined to state an amount. Katsetos said that the Putnam County Sheriff’s Office is examining the shop’s surveillance video. Capt. William J. McNamara confirmed that Moo Moo’s security video is being examined by investigators. 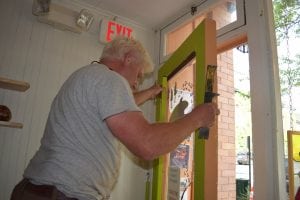 The burglar or burglars also attempted but were not unsuccessful breaking into Kizmet and Le Bouchon, both located on Main Street. Caryn Canova, owner of Kizmet, said that it was the first time she had experienced an attempted break-in during her 16 years on Main. The culprits broke a window at the back of her shop but failed to actually enter the store.

At Le Bouchon the break-in was also attempted via the rear of the building where a small windowpane on the door was broken. A restaurant employee said the incident had to have happened after 11 p.m. – the time that the manager closed the restaurant.

There have been a number of break-ins in the village in recent years and it seems some Main Street merchants are getting the message. Vierra told The Current that after the last time the restaurant was burglarized a safe was added in order to secure cash overnight. A deadbolt that requires a key was also added to the back door. That change in the locking system was what prevented entry into the restaurant on Monday night. Although by breaking a small window in the door the would-be thief or thieves were able to reach the deadbolt — they were not able to open it.

Lynn Miller said that when she arrived at Go Go Pops Tuesday morning and saw the broken door window she initially assumed that a rock had probably flown up as a result of Main Street project construction taking place out front. “But when I realized the door was open and saw the cash register … I knew we’d been robbed.”

Asked how she felt when she realized she was the latest victim of a burglary, she said, “It takes a while to sink in. It kind of felt like ‘OK, it’s our turn.’ Others have had the same misfortune and it tends to go round.” Miller said she was grateful the cash register wasn’t broken and that an iPad left in plain sight wasn’t stolen.

She expressed some empathy for the thief, saying that the person must have been desperate. “To break into a little shop like this? They must be really badly off in some way. Maybe they need some help.”

Miller even managed to laugh despite the unpleasant circumstance. “People say that bad things happen in threes —  I’m hoping they don’t happen in fours,” explaining that her father had recently passed away, followed by a flood that had damaged their shop, and now a break-in. “I hope this is the last of it,” she said.

11 thoughts on “Rash of Break-Ins in Cold Spring Shops”