A last-minute legal dispute thwarted a bid by Scenic Hudson to purchase and preserve the largest privately owned tract of forest in the Highlands. The 1,168-acre parcel, located on the Putnam-Dutchess border, includes most of Scofield Ridge, extensive forests, rocky slopes, wetlands and streams, as well as the 32-acre Lake Valhalla.

Scenic Hudson announced Jan. 24 that it had terminated an agreement to buy the land because, days before the deal was to be finalized, the Lake Valhalla Civic Association (LVCA) filed suit in state court against the property owners, Silver Point Capital and BMR Funding of Greenwich, Connecticut. Scenic Hudson is not a party in the litigation.

Paul Kaye, vice president of the LVCA, said that the lawsuit is intended “to establish that the homeowners in Valhalla Highlands enjoy an ownership interest in the lake and other lands surrounding the community.” An attorney for the property owners declined to comment.

Lake Valhalla residents say they fear selling the land to Scenic Hudson would open the area, including the lake, to the public. The association wants a court to rule that the LVCA owns the lake and land around it, to prevent that part of the parcel from becoming a park.

Seth McKee, land conservation director with Scenic Hudson, said the goal of its proposed purchase of the Lake Valhalla property had been to link it with conserved lands to the north and south, specifically Fishkill Ridge and Breakneck Ridge. A north-south link would likely increase the number of hikers in the Lake Valhalla area. 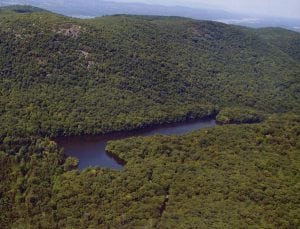 The Current contacted a number of residents who spoke on the condition they not be identified. “We are concerned about hordes of people taking over the lake, and associated liability,” one said. “This is not what we bought into. We pay more for homes here to enjoy exclusive use of the lake.”

Another said: “If Scenic Hudson’s intention is to preserve the land, they should just do that. Preserve, conserve. Linking the trails would have an adverse effect on the land. It would have a negative environmental impact.”

LVCA President Glenn Cavanaugh echoed that concern. “Our legal issues with BMR do not conflict with preservation goals,” he wrote in a statement. “Our goal is to protect the lake and surrounding lands from unacceptable development and usage impacts.”

In 1928 Ludwig Novoting and Peter Sivertesen purchased six farms totaling about 735 acres above the present site of the North Highlands firehouse. The two were partners in a company that manufactured the Globe meat slicer, which is still sold.

The development came to be known as Valhalla Highlands. Lake Valhalla was created when a dam was constructed on Hell’s Hollow Brook. Novoting also built a large home called Valkyria that now stands empty. The home’s name is a nod to Die Walküre, the opera by Wagner.

In the 1930s Novoting built about 60 small homes around Lake Valhalla. The development included roads, a beach, docks, pavilions, tennis and shuffleboard courts, scenic lookouts, trails and camping areas. A real estate ad at the time promised “rustic log cabins and fieldstone cottages ideally located in the wooded mountains at 1,200 feet elevation. Just 47 miles from your city home.” The initial meeting of the “First Settlers” took place in 1934. The LVCA was created in 1971. 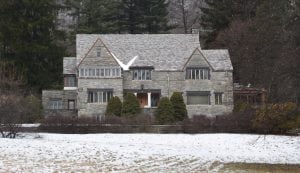 Valkyria was built by Ludwig Novoting around 1930. (Photo by M. Turton)

In Valhalla Highlands: The First Thirty Years, 1929-1958, author Joe Lombardi recalled coming to the summer home his family owned at the Valhalla Highlands from 1930 to 1997. “My time spent at Valhalla with my parents and sisters and summertime friends roaming the trails, camping in the forest, swimming, sailing and fishing at Lake Valhalla and playing tennis, shuffleboard and softball was the antithesis of the noisy, dangerous, confined-to-the-inside New York City winters,” wrote Lombardi, a restoration architect who in 2013 purchased Alfheim Lodge.

Homeowners had access rights to the lake and facilities but Novoting retained ownership of the roads, lake, common facilities and forest. After his home was finished in the early 1940s, Novoting (known as the Commodore) enlarged the dam to bring the water closer to the house.

Novoting died in 1985 and his widow sold Valhalla Highlands, including Valkyria, to a real estate developer who added 470 acres. Silver Point Capital and BMR Funding of Greenwich now own the property.

Cavanaugh said that once the title dispute is resolved, preservation efforts by Scenic Hudson could move forward, but it’s clear that the association would consider an influx of hikers around Lake Valhalla to be unacceptable development.

The 59 homes in the private development were built in the 1930s, and a homeowners association was formed in 1934. The area was added to the National Register of Historic Places in 2014. 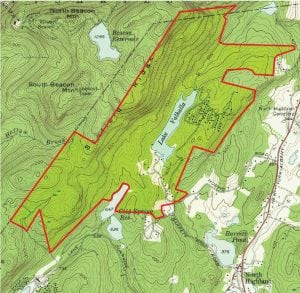 A map showing the boundaries of the Valhalla Highlands (image provided)

A letter sent by the LVCA board to residents in December outlined the provisions of the proposed contract between Scenic Hudson and the landowner (it is not known if the agreement was subsequently revised). Two points no doubt fueled residents’ concerns about public access. One stated that Scenic Hudson had “not decided on its full plans for the lake.” While the contract called for a portion of the eastern end remain open to the LVCA, it also said “there would be no proscription against public access to the lake.” A second point indicated that the trail system “would be accessible to the public.”

Other provisions outlined in the letter included the transfer of road ownership to the LVCA; sale of the common recreation facilities to the association; a dam to be repaired by Scenic Hudson and maintained by LVCA; development to be restricted by easement over the entire property; and that Valkyria, a home built by Ludwig Novoting, co-founder of Valhalla Highlands, would remain in private ownership with an easement restricting development.