A nuclear plant may close, but it doesn’t go away

The Indian Point Energy Center in Buchanan, which is scheduled to close in 2022, is one of six nuclear plants across the U.S. expected to shut down over the next decade. Each plant and the community around it will need to address the same crucial problem that plagues the 30 reactors decommissioned since 1957: where do you send millions of pounds of fuel rods that will remain radioactive for tens of thousands of years?

The answer, for now, is nowhere.

“There’s 2.2 million pounds of spent nuclear fuel rods on our lakefront, 300 yards from Lake Michigan,” said Al Hill, the mayor of Zion, Illinois, who spoke on June 9 at a forum at the Desmond-Fish Library in Garrison organized by the Journal News, Clearwater and the National Resources Defense Council. 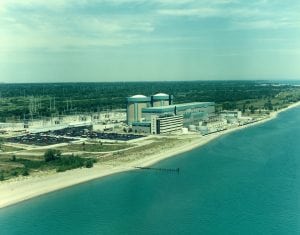 The Zion plant closed in 1998, and the cleanup continues. “There was never an understanding that the Zion community would be the host of a radioactive dump,” Hill said. “That was not part of the deal.”

When the plant opened in 1974, it brought jobs and tens of millions of dollars in annual tax revenue to Zion, a city of 23,000 people located about 40 miles north of Chicago. But when the plant closed, the city’s economy collapsed almost overnight, Hill said.

While many cities have had factories close, fewer have to deal with factories that become nuclear-waste dumps. Hill said that when construction began on the plant in 1968, Zion officials understood that the 400-acre lakefront parcel would be eventually returned to the city for redevelopment. “Maybe the people who entered that deal back in 1968 were naïve,” he said. “But that was the deal.”

The Desmond-Fish forum brought together nuclear experts, activists, scientists and lawmakers to discuss the challenges that communities such as Zion face when nuclear plants are decommissioned. Symposiums planned for the fall will address how to replace the electricity that Indian Point generates and how to train and find jobs for the 1,000 people who work at the plant.

As long as the nuclear waste remains at Indian Point, its redevelopment is impossible. And the waste won’t be moving anytime soon, since the U.S. does not have any place to safely store it for tens of thousands of years. 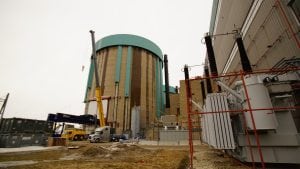 A private company began decommissioning the Zion plant in 2010. (ZionSolutions)

That’s not for lack of trying. The government has spent 25 years on a plan to build a facility inside Yucca Mountain, Nevada. Nevada lawmakers oppose the plan because Yucca Mountain sits over a water table and near earthquake fault lines. Temporary sites in West Texas have been proposed, but many experts argue that, given the risks, nuclear material should be moved once or not at all.

In the meantime, Zion remains a de facto storage facility, and Hill said the Hudson Valley should expect the same thing at Indian Point. “Unless something happens really fast with Yucca Mountain or some other permanent repository, you’re going to have nuclear waste being stored in your community,” he said.

At the forum, David Kraft, director of the nonprofit Nuclear Energy Information Service, which opposes nuclear power, said states have few legal options when facing off with the federal Nuclear Regulatory Commission. One strategy is to argue, as Nevada has, that the waste threatens groundwater, rivers, and streams. But if the federal government can find a way around water protections to proceed with Yucca Mountain, it could set a precedent that would work against using the argument to protect the Hudson River. 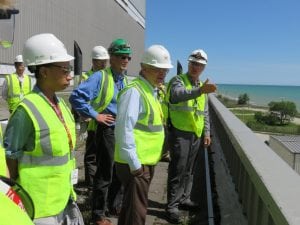 Mayor Hill is working with Sen. Tammy Duckworth (D.-Ill.) on a bill that would compensate communities such as Zion based on the amount of waste stored. For Zion, it would provide about $15 million a year, which Hill said would allow the city to ease the burden on taxpayers. Such a law would ostensibly provide payments at least to the Village of Buchanan.