The creation myth surrounding the Tarte Tatin inevitably begins in late-19th century France with les soeurs Tatin — restaurateurs Caroline and Stéphanie (the chef) — who purportedly rescued an overcooked apple pie filling by covering it with pastry and finishing it in the oven. The inverted tart was met with immediate approval by the patrons of the Hotel Tatin.

Whatever the case, the traditional recipe is now celebrated globally, and nowhere more comprehensively than by the Friends of the Tarte Tatin founded by Bernard Munos, a native of Lamotte-Beuvron, home of the Hotel Tatin, who now lives in Indianapolis.

His website at tartetatin.org features both a baseline recipe for the dessert as well as a solicitation for “improvements,” which made me wonder what Munos would think of the “creative destruction” and/or disruption suggested by Vidalia Onion Tarte Tatin. 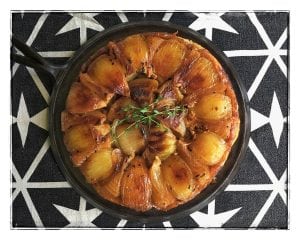 When I asked him by email, he was nonplused. “Basically any fruit or vegetable that keeps its shape while cooking and contains sugar (or can tolerate its addition) can be used for a Tarte Tatin-style dish,” he wrote, the operative qualifier being Tarte Tatin-style. “This includes other fruits (peach, pear, pineapple, etc.) or vegetables (onions, tomatoes, etc.).”

Sure enough, there are iterations of all of these, and on the savory spectrum, tomato, endive and root-vegetable versions. To that end, Munos suggests, “fruits or vegetables lacking natural acidity may benefit from added lemon juice.”

The onion idea seems to hold universal promise. Here I’ve used Vidalias, which are sweeter and at present a bargain, but yellow onions, red onions, spring onions, leeks or shallots would do the trick. For acidity, add a little vinegar and Balsamic adds another layer of complex sweetness. Slow, covered, stovetop cooking of the onions in a rich stock ensures tenderness and the preliminary reduction of that stock provides a bit more caramelization/Maillard effect.

In the spirit of innovation, I suggest either a handful of chopped black olives (and/or anchovies) scattered over the onions before baking to take it into pissaladière territory, or goat cheese and fresh chopped basil once the tart is plated but still warm. It makes a perfect summer lunch with a salad of fresh greens or is a great match with roasted or grilled meats. Writing this, it occurs to me that a combination of the classic apple Tarte Tatin with an equal measure of onions would up the ante of a roast pork feast.

Barely melt the butter in a 10-inch heavy ovenproof skillet or Dutch oven with lid. When just melted, remove from heat and sprinkle sugar evenly over the butter.

Beginning at the outer edge of the skillet, alternate the onion wedges (skin side, cut side, etc., root end to the center) in concentric circles until the skillet is tightly filled in one layer. Evenly distribute the garlic and thyme over the onions. Salt and pepper to taste. (If there are onions left over, thinly slice them and scatter over the top.)

Cook, uncovered, over medium high heat for about 5 minutes. Shake pan slightly and rotate on burner to ensure onions cook evenly and do not stick to pan. Reduce heat to medium and cook for another 5 minutes or so.

Pour stock and vinegar over the onions bringing it to a lively simmer, reduce heat to low, cover skillet and cook undisturbed for 30 to 45 minutes until onions are completely tender.

Remove cover and raise heat to medium-high/high heat and cook liquid until almost completely reduced to a syrupy consistency (about 7-10 closely watched minutes). Remove skillet from heat and allow to cool slightly. Preheat oven to 375 degrees.

Lay pastry sheet out on a lightly floured surface and cut to a circle slightly larger than the skillet. Wrap circle around a rolling pin and unroll over skillet tucking the edges in around the onions.

Bake in pre-heated oven for 30 to 45 minutes until golden and bubbling. Remove from oven and allow to cool for 10 to 15 minutes. Run a knife around the edge and over a sink and using oven mitts, carefully and quickly invert into a larger diameter serving plate. Serve warm or at room temperature garnished with more thyme.