On Sunday, Oct. 22, at 2 p.m., the Continental Village Fire Department and other agencies responded to an emergency call on Anthony’s Nose near the Bear Mountain Bridge after a hiker suffered a heart attack. 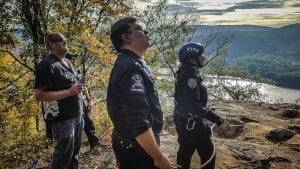 First responders watch a helicopter position itself over Anthony’s Nose for a rescue. (Photo provided)

A team of seven rescuers — four firefighters from Continental Village, an EMT from Peekskill EMS, a paramedic from Cortlandt Regional Paramedics and a New York State Park Police officer — reached the victim after 25 minutes of hiking.

The rescuers called in a helicopter from the New York City Police Department, which lowered a paramedic to assist. The hiker was taken to Westchester Medical Center. The rescue took about three hours.