Plus, updates on other projects around Beacon

The proposed Edgewater development in Beacon will not have a significant adverse effect on the city’s school district, the Planning Board has decided.

Next up for the 307-unit project is the Zoning Board of Appeals, which must rule on three variances its developer has requested. The board will hold a public hearing on the requests — for the number of stories allowed per building, the number of units per building and the space between buildings — on Tuesday, Dec. 19.

The Planning Board recommended the ZBA allow more stories per building but deny the variances for the number of units per building and space between buildings.

Edgewater officials say the variances would minimize the construction footprint of the project, but that they will proceed whether granted or not.

“We’re trying to create and be a leader in doing something different, and that’s why we’re asking for these,” said Rodney Weber, who is developing the project and several others in Beacon.

After the ZBA rules on the variances, the City Council will decide whether to grant Weber’s company, Scenic Beacon Developments, a special-use permit. If Edgewater clears that hurdle, the Planning Board would vote on final approval of the development.

The Dec. 12 Planning Board meeting was the conclusion of a seven-month-long environmental review that had become a standoff between Weber and the Beacon City School District. Edgewater consultants contended that when balancing increased property tax revenue with the number of new students the development would add to the schools, the project would be a net benefit for the district. 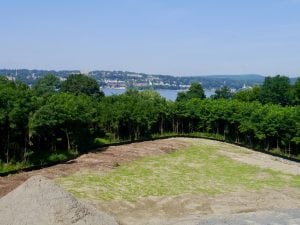 The view from the Edgewater project site (Photo by J. Simms)

School officials countered that the developer had underestimated the cost of adding students to an already strained and underfunded district.

The district seemed to win the popular vote, as more than 600 people signed an online petition in its favor, but in the opinion of the Planning Board, the development would not create a “significant” adverse effect on the schools.

“The school board’s issue does not lie on the back of one project,” Board Member Randall Williams reasoned. “We have to address the problem that already exists in the schools.”