Winter has certainly settled in and while the overall effect has lately been more arctic than alpine, February generally reinforces an appetite for ingredients and combinations common to — of all places — the ski lodge: warm, oozy cheeses (think Raclette or fondue), potatoes (Raclette, again, or if you’re Québécois, poutine) and … buckwheat pasta?

You may be familiar with soba (Japanese for buckwheat) noodles, but the European Alps have a history of embracing buckwheat: in Lombardy in Northern Italy, pizzoccheri; in the French Savoie, crozets; and recipes that use either or both to create humble but distinctive comfort foods.

Pizzoccheri (peet-zoh-CHAY-ree) is believed to be one of the earliest forms of pasta, as it was cut in pieces or strips from larger sheets of buckwheat lasagna and proscribed in size and shape (2½ inches wide by 3 to 4 inches long) by the Academy of Pizzoccheri in the Lombard village of Teglio. The dish Pizzoccheri alla Valtellina (a reference to the valley which produces the casena and bitto cheeses in the official recipe) is described as early as 1550 in Ortensio Lando’s Catalog of Inventories of Things That May Be Eaten in Italy.

In addition to buckwheat pasta and Alpine cheeses, the sanctioned recipe includes slivered or cubed potatoes, cabbage, garlic-infused butter and the specific herbal flavor of sage. If it sounds complicated, it’s not: the potatoes, pasta and cabbage are incrementally boiled together in the same pot and tossed with the garlic-infused butter, sage and cheeses. 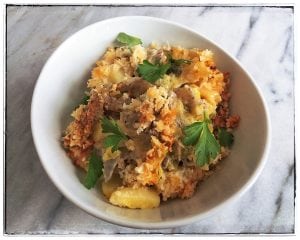 Because we are not in Lombardy, you are authorized to alter the ingredients for an Americanized, Hudson Valley version. Substitute Fontina, Montasio or an American-made Raclette for the casera, or a combination and some Emmenthal, Gruyere or Gouda for the bitto.

Savoy cabbage is traditional, but any hearty crucifer (chard, kale, radicchio) or spinach will do.

Authentic pizzoccheri pasta may be hard to come by, but it can be found packaged dry online or at Eataly or Buon Italia in the Chelsea Market in Manhattan. Dry pastas will require an adjustment in the sequence and time of the one-pot cooking method.

Fresh buckwheat pasta can be had from Rafetto’s and elsewhere but it needs to be cut into shorter strips for proper texture. If you’re a real cook, make your own, but the nutty character of the grain is what makes pizzoccheri, well, pizzoccheri. If worse comes to worse, an imperfect but acceptable substitute is whole wheat (or spelt) fettuccine.

Pizzoccheri alla Valtellina is traditionally tossed and served straight from the pot, but I’ve incorporated a variation suggested by Marcella Hazan and present it as a casserole topped with a bread crumb-parmesan crust. This allows you to prepare it ahead of time or freeze a batch.

Put a large pasta pot three-quarters full of water on to boil and salt it like the sea. Butter a large (about 4-quart) casserole dish and set aside. Preheat oven to 350 degrees.

Melt butter in a small saucepan over medium-low heat. Add garlic and cook enough to flavor oil but not brown the garlic. Remove from heat, discard garlic and set aside. Add sage leaves to cooling butter.

Once the water is boiling, add potatoes and cook about 3 minutes. Add the pasta and cook all for an additional 2 minutes. Add cabbage and as soon as it is wilted (about 1 minute) drain all to a large strainer.

Return drained pasta and vegetables to the pot and douse with the sage and butter; toss lightly to coat. Evenly scatter and lightly toss the sliced cheeses into the pasta-vegetable mixture. Pour all into the buttered casserole.

Combine grated cheese and breadcrumbs and sprinkle evenly over casserole. Bake in center of oven for 30 to 45 minutes until topping browns lightly. Serve hot.

2 thoughts on “Small, Good Things: Things That May Be Eaten in Italy and Elsewhere”