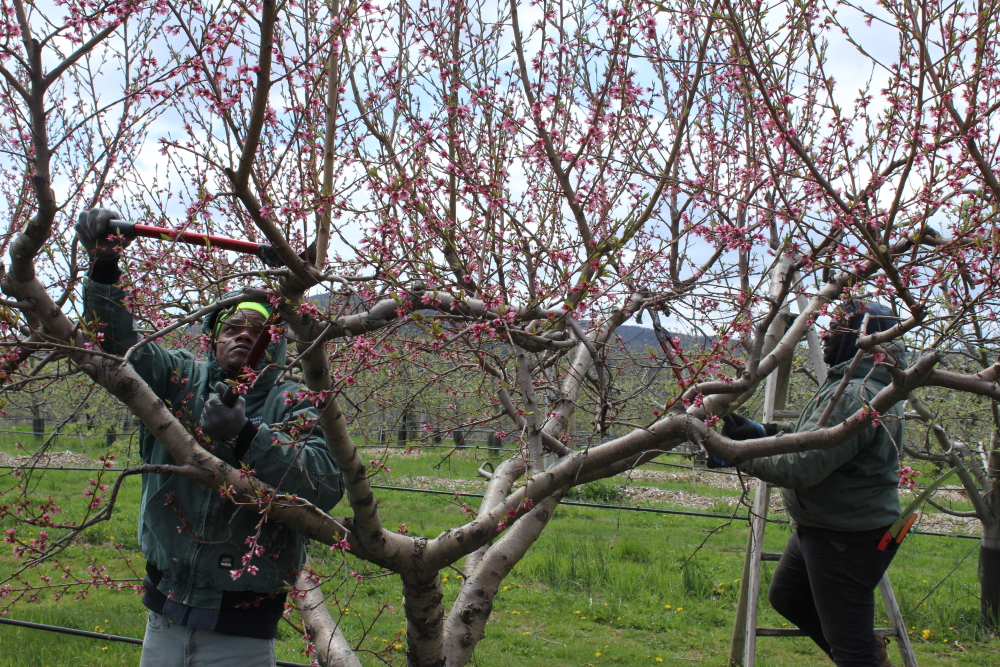 The first blooms had arrived on Fishkill Farms’ fruit trees, but not the Jamaican farmworkers who have for years been granted visas to work the 270-acre farm’s fields and greenhouses for up to nine months.

So on Wednesday (April 22), amid rows of peach and nectarine trees and piles of clipped branches, the crew undertaking the all-important pruning of the trees included the farm’s cider maker and the its marketing communications and events manager.

“We’re working as hard as we can around-the-clock to get everything done,” owner Josh Morgenthau said on Tuesday. “But we can’t do it without that additional help.”

Labor concerns. Loss of wholesale revenue. Difficulty getting gloves and masks, along with traditional farming supplies. These are some of the challenges buffeting farmers in the wake of the coronavirus outbreak.

While the effort to halt the virus’ spread has led to a widespread shutdown of restaurants, retailers, colleges and other wholesale buyers, the confinement of people to their homes has created an increased demand from local residents for locally grown and raised vegetables, meats, eggs and other products.

Growers who usually would be selling products out of their farm stores this time of year have pivoted in response to the shift in demand, quickly setting up systems to allow customers to order by phone or online, and then pick up their food or have it delivered.

The Glynwood Center for Regional Food and Farming in Philipstown experienced a “huge demand” for its inventory, including meats, according to Lynda Prim, the center’s senior director.

Shares in the center’s community-supported agriculture program filled up, and the waiting list is so long that Glynwood is referring people who call about CSAs to other farms, she said.

“Suddenly we were inundated with people wanting to buy our food,” Prim said. “Like three to four times more than what we planned for.”

The pandemic has not only closed wholesale buyers of farm products, it has disrupted supply lines and halted the educational programs that draw children and adults to farms.

Some farmers are finding it difficult to get core supplies, like seeds, Prim said. This month, Marist College announced that it could no longer subsidize the operations of the long-struggling Sprout Creek Farm in Poughkeepsie, and that the farm would cease operating and its animals be relocated.

“The challenges associated with the COVID-19 outbreak have only exacerbated the financial challenges of Sprout Creek Farm operations and made its business model unsustainable,” its board said on April 17. 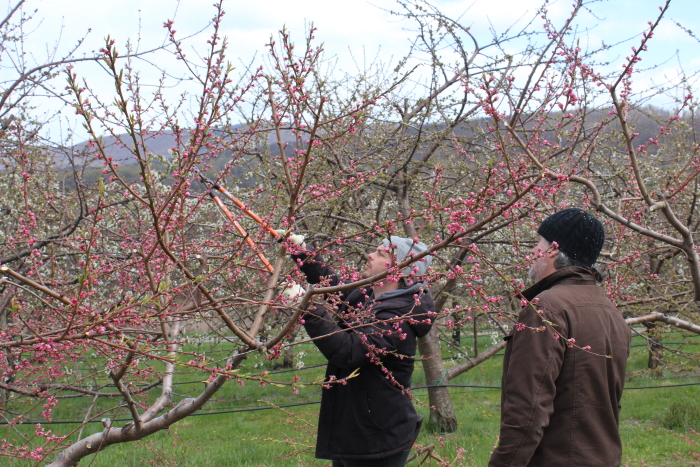 On Wednesday afternoon, standing among Fishkill Farms’ fruit trees, Morgenthau said he had just received confirmation that his Jamaican crew had received authorization and would be arriving the next day.

Every member of the crew has worked the farm for at least five years, and some for 10 years, Morgenthau said. Their knowledge of the farm’s growing and harvest process, and its machinery, is irreplaceable, he said.

“It was a huge relief,” Morgenthau said of the news that the crew was on its way.

Fishkill’s farm store was closed last month and an order-by-phone system set up. On the farm’s website, customers are warned that getting through may take repeated calls.

Among the products customers can buy are apples from last year’s harvest, greens and vegetables from the greenhouses, eggs and products from other farms.

“We’ve never made a profit in the winter and this hasn’t changed that, but it has been encouraging that sales have been double or more what they would have been this time of year,” Morgenthau said.

But the farm created an online system in which customers order from home and drive to the farm to pick up their packaged items. The farm has been “hopping,” Armater said.

“I’m not really sure why, but we believe it’s because folks want to stay away from a crowd [at supermarkets] and they want to know who’s been involved in the production of their produce,” he said.

Glynwood also “quickly put together” a delivery system, Prim said, with the farm’s employees putting on masks and gloves to deliver food in their cars. She said Glynwood and other farms are discussing a formal distribution network.

The Cornell Cooperative Extension has compiled a list of Dutchess County farm stores that offer curbside pickup and/or delivery, including Fishkill Farms and Meadowbrook in Wappingers Falls.

Other questions loom as the farms’ high season approaches, including whether  social-distancing guidelines will still be in place and, if they are not, whether people will still be too cautious to visit farms.

Soon, Fishkill Farms will be harvesting its vegetables and fruits, including nectarines, peaches and strawberries. The biggest draw, however, is the fall apple-picking season. Morgenthau said he and his team are discussing ways to safely have people on the farm.

“We have uncertainty there, but we’re planning very intently on redesigning our systems to make that safe and possible,” he said.

In 2018, Glynwood launched the Hudson Valley Farmer Training Collaborative. Its members are wrestling not just with concerns such as distribution, but with another huge question: If the strong demand continues, will farms be able to produce enough with their current labor forces?

The Poughkeepsie Farm Project is relying on a core group of employees but, to maintain social distancing, it’s not using volunteers or people who, through the farm’s reduced-price share, normally help out in the field.

Armater said he has “hit the brakes” on spending, but is committed to keeping staff employed. Glynwood has also been able to keep everyone on the payroll, but other farms are unable to pay their workers, Prim said.

“None of us can afford as much help as we’ve have had in the past, so we’re doing things with less labor,” Prim said. “Now we’re all trying to figure out whether we could actually produce more with the labor we have.”

One thought on “Healthy Appetite for Farm Goods”