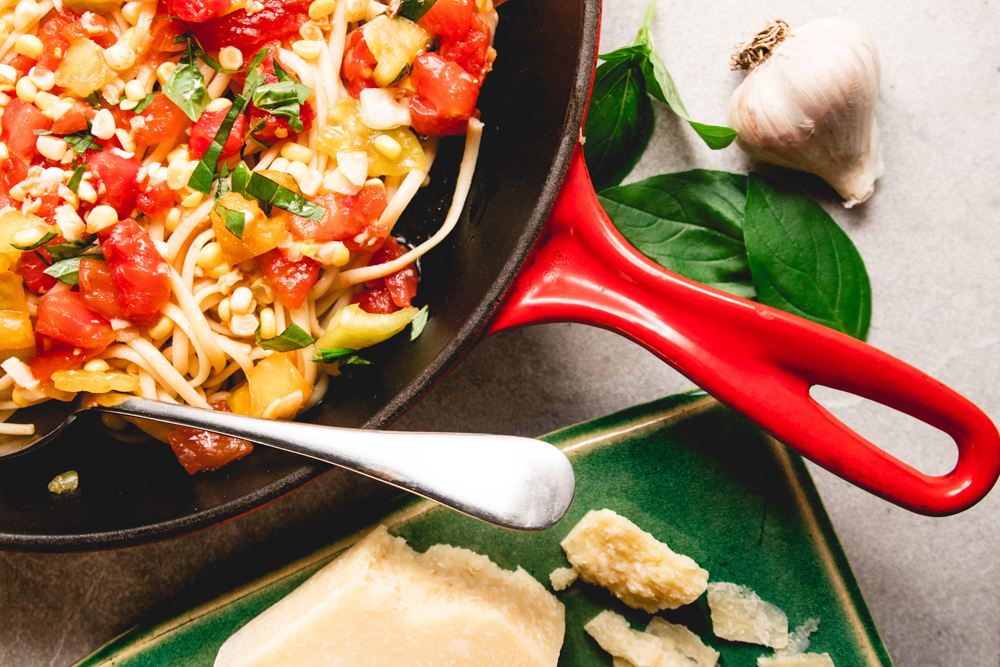 Some years back, a parent-friend texted me asking if I knew a yummy, easy vegetable recipe he could make for his vegetable-averse kids.

Sure, I wrote, and proceeded to describe the process for making broccoli with garlic and olive oil, one of the easiest recipes I know. By the time I was done describing the keys to its yumminess — peeling the stems, cooking the broccoli until meltingly soft, finishing the pasta in the broccoli pan with some reserved pasta water — my text filled the whole screen plus a scroll-down, and ran to nearly 250 words.

I paused before hitting send, worried that the prolixity of my reply would prevent my friend from even attempting the recipe. But despite multiple re-readings, I couldn’t find anything to cut. Every trim risked making the resulting dish less appealing. And an un-appealing dish would have sabotaged the whole endeavor: His kids would shun the meal; he would feel duped and frustrated; precious food would go to waste.

He never cooked it.

If only he could have watched me make this dish just once, I thought, he would have realized how effortlessly it comes together.

The earliest known written recipes originated in Mesopotamia, 3,700 years ago. (I should say, “The earliest known food recipe”; older recipes have been found in China and elsewhere for beer. Figures.) The first cookbook was published nearly 2,000 years later, in Rome. Historian Jean-Louis Flandrin, editor of Food: A Culinary History, claims that “without writing, recipes cannot survive.”

When I read Monsieur Flandrin’s statement, I had to go back and reread it, then get out my reading glasses and read it again.

What did he mean? Of course recipes can survive without writing. How else does he think this knowledge persisted over the countless prose-free millennia that human beings have been alive and cooking? And not only did recipes persist, but they evolved and flourished into amazing, diverse cuisines. The wise, careful preparation of food has always been essential to survival, and passing it along from one generation to the next was surely among our forebears’ most vital duties.

Even now, when cooking ability is no longer a life-or-death skill, I’m still convinced that being present in the kitchen of a competent and generous-hearted cook is the best way to learn how to make a dish — far better than any written recipe or, for that matter, YouTube video.

When I was in my mid-20s, I had the great good fortune to live down the hall from just such a person. Julie taught Italian cooking classes for a living, and I spent much of my downtime in her apartment. Several things that I make from memory today come from the hours I spent watching and listening to her.

I thought of her last week when my son Henry texted asking what to do with 12 tomatoes. I was in New Hampshire with Peter; he was at home with his brothers, tending our rampant garden between bouts at his internship.

The first idea that came to mind was one of those recipe-less dishes I’d learned from Julie — one she had described as “tasting like summer.” But remembering my fruitless broccoli exchange, I hesitated: could a text message convey the essentials? Yes, I thought — to Henry it could. He’s spent enough of his 19 years observing my kitchen habits and developing his own competence and ease; he would be able to interpret my shorthand. “Warm some olive oil,” I began, finishing, 137 words later, with “when the pasta’s coated and silky, add basil. Enjoy.” And, with the help of his brothers, he did.

You can skip blanching the tomatoes in Step 1 and simply cut them into pieces, skin and all, if you don’t mind little bits of curled-up tomato skin in your final dish (I usually don’t).

Fill a basin or bowl with ice-cold water. Bring a pot of water to boil. Working in batches, add the tomatoes a few at a time, and blanch for 30 seconds. Transfer tomatoes to cold water (keep the water to reuse for boiling the pasta). When the tomatoes are cool, slip away the loosened skins (you may have to pierce them gently with a knife to get them started). Chop into roughly 1-2 inch pieces. Set aside.

Heat olive oil in a large skillet over medium-low heat. Add the sliced garlic, and cook gently until translucent and starting to soften (you may need to turn off or adjust the heat to prevent browning).

Meanwhile, bring the pot of water back to a boil and cook pasta to al dente, about 2 minutes less than package directions. Drain, saving a cup of the cooking water.

Increase the heat beneath the skillet to medium, and add the corn to the garlic mixture, season with salt and pepper, and cook, stirring occasionally, 3 minutes. Add the reserved pasta water, the pasta, and bring to a bare simmer. Reduce heat and add the chopped tomatoes. Stir in the butter a tablespoon at a time, alternating with a tablespoon of parmesan, until the pasta is coated and silky. Taste and add salt and pepper as needed. Toss with basil leaves just before serving.