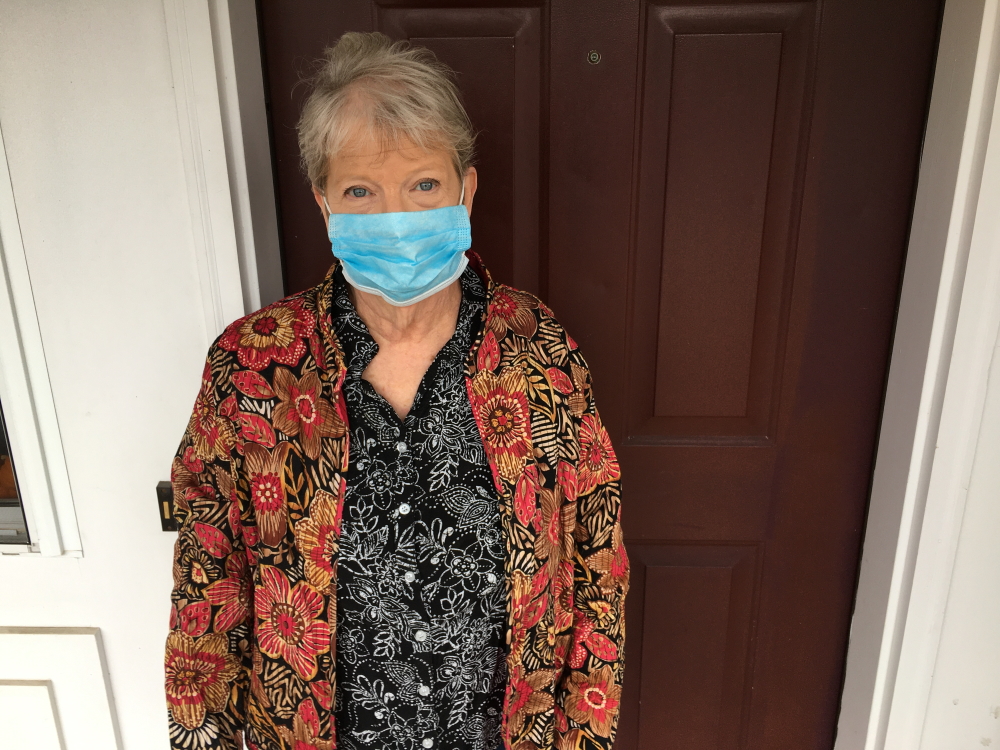 Mary Roth of Beacon has seen her activities curtailed because of the shutdown. (Photo by L. Sparks)

For Monica Perez and Mary Roth, life before COVID-19 was filled with connections.

Perez, 62, who is epileptic and lives in the Forrestal Heights Apartments for seniors in Beacon, shared Easter, Thanksgiving and Christmas meals with family and discussed books with members of a monthly club that met at the Howland Public Library, where she also took classes.

Roth, 79, lives with her adult son in the Meadow Ridge development and twice a week attended a two-hour gathering at the Salvation Army, where she and other seniors would share lunch and participate in activities like crafts and movies. She and her son also, at least once a week, went to the Mid Hudson Animal Aid and Animal Rescue Foundation shelters on Simmons Lane in Beacon to socialize with the animals.

Now, Perez said she only leaves her apartment once a week — to buy groceries — and that, just like at Easter, she will not be spending Thanksgiving and Christmas with her family this year due to safety concerns. Roth, who drives, said she gets out for occasional errands, such as dropping off her ballot in Poughkeepsie last week, but otherwise remains at home.

“Practically nobody has been to our house,” said Roth. “We’ve been pretty strict.”

Even before the pandemic shutdown, seniors were at a higher risk of suffering from social isolation, which research has shown can be a detriment to mental and physical health, as well as cognition. With many older people having limited contact with family because of fears of infection, and with in-person activities and events significantly limited, the isolation has become much more pronounced.

The number of older adults who reported feeling lonely more than doubled during the first three months of the pandemic compared to the same period in 2018, according to a survey of 2,000 people between 50 and 80 conducted by the Institute for Healthcare Policy and Innovation at the University of Michigan.

Local and county agencies have responded by organizing drive-through, outdoor and virtual events for older residents, creating volunteer networks to deliver food and prescriptions and contacting seniors by video conference and phone. At the same time, many seniors are embracing the use of smartphones and social media to maintain contact with family and friends.

Putnam County’s first outreach effort to seniors when the shutdown began in March was through phone “wellness checks,” said Michael Cunningham, who directs the Office for Senior Resources. He said one woman who was not home at the time called back to say, “I’ve played your message seven times.” He noted, “Some people really do not have people to talk to.”

The pandemic has threatened seniors on two fronts.

Of the nearly 26,000 people who have died in New York State of COVID-related complications — including 165 in Dutchess and 63 in Putnam — 85 percent have been 60 or older. As the state’s death toll peaked in early April, many older victims died alone in hospitals and nursing homes, which for months, under state restrictions, were inaccessible to family members.

About 56 percent of the older adults surveyed by the University of Michigan reported feelings of isolation during the first few months of the pandemic, compared to 27 percent who reported those feelings in 2018. In addition, 46 percent reported “infrequent contact” with other people, compared to 28 percent two years earlier.

The pandemic also forced the closure of senior centers, churches, community organizations and libraries; led to the temporary cancellation of county-run services such as transportation to doctor’s appointments; and spurred quarantines that prevented family members from physical visits.

A 317-page study released this year by the National Academies of Science, Engineering and Medicine calls social isolation and loneliness among seniors a “serious yet underappreciated public health risk,” noting that nationally about a quarter of people who are 65 or older are socially isolated despite living in communities. That isolation typically comes after the death of close family and friends and/or the development of a chronic illness or sensory impairments, such as a loss of hearing or eyesight, that limit communication and mobility.

Research shows that social isolation may be as much a risk factor for early death as high-blood pressure, smoking or obesity, the study said, and that it may accelerate dementia and heart failure. The report calls on health care professionals — who may be the only people that an isolated older person interacts with regularly — to be aware of the effects of social isolation, particularly among lower-income and other vulnerable populations, and offer remedies.

Perez says she started feeling “a little bit lonely” as the shutdown began. “I’m very much a people person, and I’m very active, and I could not participate like I used to,” she said.

Her family members — nieces and nephews and their children in Dutchess County — have been limiting their social contact. Concerned about getting infected, Perez and a friend decided to form a pandemic “bubble,” a small social group in which members agreed not to have in-person contact with anyone else.

Once a week, the friend visits Perez in her apartment, where they eat and socialize with other women during a Zoom-based support group. The friend has, however, been having health problems recently, Perez said.

“If I lose her, I will lose my only face-to-face contact until this is over,” she said.

‘The kindness of strangers’

In March, when the shutdown began, Dara Silverman, a consultant living in Beacon, read Facebook posts from seniors worried about how they would get groceries. She also saw that a group called Mutual Aid Medford and Somerville had formed northeast of Cambridge, Massachusetts, to help local residents.

Silverman and others formed Mutual Aid Beacon and recruited a corps of volunteers to collect and distribute food to homebound seniors and the newly unemployed. At one point, the organization was delivering food to 150 seniors each week, Silverman said. Volunteers also began making “emotional support” phone calls to seniors who lived alone.

“There was a need that existed before COVID, and it’s gotten even more intense,” said Silverman.

Roth said she heard Beacon Mayor Lee Kyriacou mention the group on television and called, along with telling others she knew about the organization. “We depended on the kindness of strangers,” she said.

Both Dutchess and Putnam counties closed their senior centers at the beginning of the pandemic, including the Philipstown Friendship Center in the Butterfield complex on Route 9D in Cold Spring. Instead, the facility was transformed into a hub for meal delivery, said Cunningham. Both Putnam and Dutchess counties partnered with local nonprofits to distribute groceries and hot meals.

As the pandemic and its restrictions stretch on, the social needs of seniors have come to the forefront.

Dutchess County’s Office for the Aging has organized events such as a drive-through picnic, an outdoor tai-chi class and a series of “drive-in” bingo gatherings. Putnam has set up outdoor events, as well, including a series of fall-prevention exercise classes in a county parking lot in Carmel. It is also offering more than 50 virtual classes and social gatherings, ranging from caregiver support groups to virtual bingo and book clubs, said Cunningham. 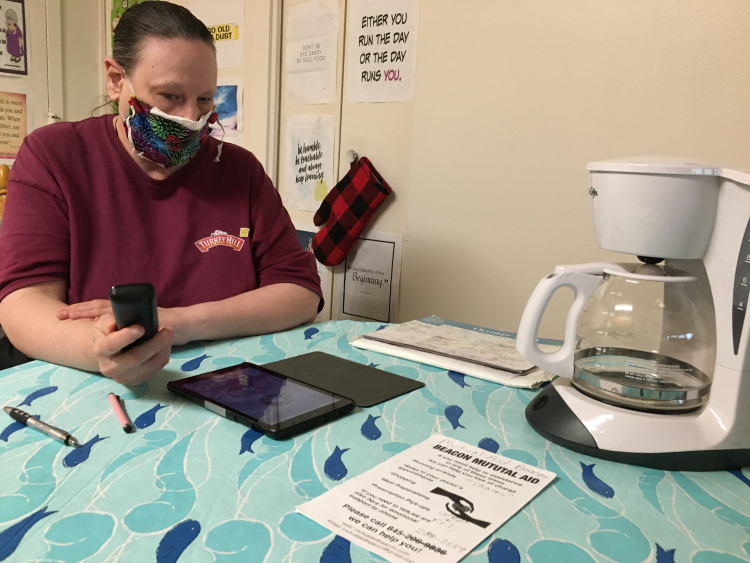 At local churches, a traditional social lifeline for seniors, the return of in-person worship has been followed by the return of live, socially distanced events. A few weeks ago, about 25 people, mostly seniors, attended an outdoor music performance at St. Philip’s Church in Garrison, said the Rev. Amanda Eiman.

“It was great for folks to see each other and share in some fellowship and music in a safe way,” Eiman said.

Roth and her son miss the cats at Beacon’s shelter so much that they still go there, even though no one is allowed inside.

“We can look through the windows and there’s a couple of cats we can always communicate with,” she said.

Roth said she was “phobic” about computers, but the shutdown forced her to confront that fear. Her Chromebook is now a tool for ordering food and other items. Although the change has “been very frustrating sometimes,” Roth said she has been “conquering it,” and even taking foreign-language lessons.

Phone calls, video chats and social media messaging have replaced physical visits from family and friends, and with doctors. About 60 percent of older people in the University of Michigan survey said they used social media at least once a week to connect with family and nearly a third used some form of video chat.

In addition to her weekly Zoom meeting with friends, Perez checks in with doctors via video, receives photos from her family through Facebook Messenger, participates in a virtual book club organized by the Howland library and gets calls at least once a week from a volunteer with Mutual Aid Beacon.

She is also joining an online women’s support group hosted by Quarantine Buddy, a virtual platform created by Cornell University students to combat social isolation during the pandemic. The group “fills up very quickly,” said Perez.

Others are not fortunate enough to have access to technology, however, noted Maeve Eng-Wong, a therapist in Cold Spring.

“There are people out there who are truly isolated and who do not have these privileges,” she said. “It is those people that I worry about.”

Home for the holidays

The holiday season, when seniors typically share meals with family and friends or with other older adults at county centers and churches, will be another of COVID-19’s casualties.

The federal Centers for Disease Control and Prevention has said that large indoor gatherings for Thanksgiving should be considered a “higher-risk” activity and has advised people to stay home.

The Office for Senior Resources in Putnam County usually holds Thanksgiving meals at its senior centers but this year is collecting donations to buy and distribute grocery gift cards, said Cunningham.

Roth said she normally shares Thanksgiving with a friend, but is staying home with her son. “We already have the dinnerware planned,” she said.

Perez’s nieces and nephews send photos via Facebook Messenger of her great-nieces and great-nephews. She responds with comments. But that will be the extent of the contact, an arrangement that Perez says was made “by mutual agreement” because she is as fearful as her family.

“If I gave it to them, I would never forgive myself,” she said.