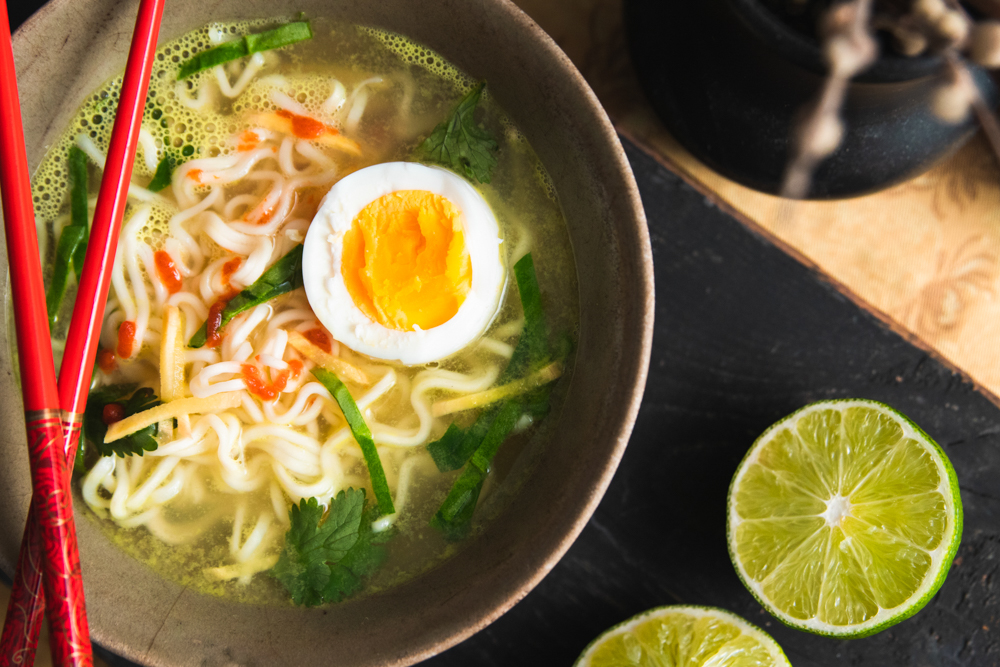 When I was a child, noodle soup meant just one thing: Campbell’s. Chicken noodle, chicken with stars, beef noodle and alphabet comprised the totality of my pasta-in-soup knowledge. Then one day my mother brought home Lipton’s, with its dry packets of herbed bouillon powder and delicate, feathery noodles meant to be cooked up just before eating.

Suddenly, here were noodles that hadn’t marinated in liquid for months or years. Noodles that, despite their diminutive size, held their own on the tongue, feeling lively and intact rather than gummy and soft. They were a delight — and no doubt Indiana’s (or at least my corner of it) precursor to ramen.

Decades would pass between those memorable bowlfuls and the day I came across the word “mouthfeel,” yet I’m convinced that my childhood encounters with processed soups prepared me to accept this totally infelicitous-sounding concept.

Early exposure to the power of mouthfeel may also explain why it seemed perfectly logical, when I became a mother myself, that my kids’ food aversions were defined more by that phenomenon than by taste. Henry hated bananas and avocados, for example; Dosi shunned kiwi and tomatoes.

Of course, none of my three kids has ever said no to a noodle of any ilk or softness. Pasta seems perfectly designed to penetrate even the most highly developed childhood food defenses. And while the first chicken noodle soups they encountered were homemade (and European-style), the kids mercifully discovered instant ramen around the same time that I was ready to abandon my annoying, make-everything-from-scratch standards and embrace whatever measures were necessary to get calories into their rapidly growing bodies.

Because we lived in Manhattan when they were little, I was also fortunate to taste homemade ramen, made with both handmade noodles and from-scratch broth, at some of the city’s burgeoning ramen shops, the best of which quickly developed lines out the door that I quickly became unwilling to wait in.

Over time, I developed my own spurious version of ramen that borrows flavors and tricks from here and there to punch up what’s at heart a quick-and-easy meal. It’s a wonderful thing to cook at this chilly time of year, when we’re craving foods that are not just warm but soul-warming warm. And when, moreover, we just might have on hand a quart of chicken, pork or turkey broth boiled up after serving a holiday roast. But this easygoing dish also works with instant bouillon if that’s all you have. 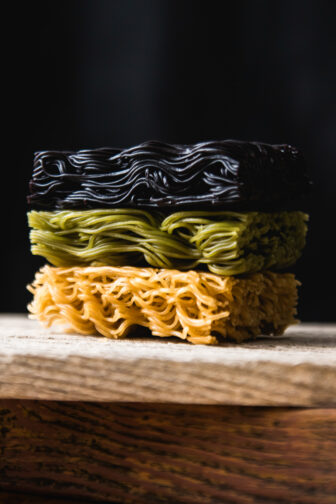 Either way, the key is to steep a few aromatics in the broth — ginger, garlic, plus some dried kombu and shitake if you have them. Meanwhile, set an egg to boil, slice up a few leafy greens and cook the noodles. Lotus Foods makes very good packaged ramen noodles that are available in most of our local grocery stores and come in an array of striking colors — purplish black (forbidden rice), green (jade pearl) and millet and brown rice (tan) — that all taste similarly mild, pleasant and noodleish. In 15 minutes, you have a meal that you will want to bend your face over and inhale before twirling a fork into the wiggly noodles.

It’s too bad the English language doesn’t have another word for taste that refers not just to the flavor of a food — that thing you receive through your tastebuds — but to the whole sensory experience of eating, from nose and eyes to flavor, mouthfeel and belly-warmth. Actually, why not have separate words for each of those experiences of deliciousness? Something besides, say, mm-mm good.

To finish the dish

This tastes best when made with homemade chicken, pork or vegetable broth, but a quality store-bought kind is also fine.

In a medium saucepan, bring the broth to a simmer. Add the ginger, garlic and cilantro stems plus the kombu and shitake if using. Turn off the heat, cover the pot, and allow to steep while preparing the rest of the dish. (The longer the broth steeps, the more flavorful it will become, so if you have time you can start it up to 40 minutes in advance.)

Place the eggs in a small saucepan, fill with warm tap water to cover by an inch, and bring to a boil over high heat. Once the water comes to a full boil, set a timer for 3 minutes. After 3 minutes, remove from heat, cover the pot, and allow the eggs to sit for an additional 2 to 4 minutes (depending on how well done you like them). Transfer to cold water. Peel and cut in half.

Meanwhile, cook the ramen noodles according to package directions. When done, drain, rinse with cold water until the noodles feel slippery, then set them aside in the colander or strainer while you prepare the rest of the dish.

Strain the aromatics from the broth and bring it back to a boil. Add the chopped spinach, the soy sauce and mirin and, and cook just until the spinach begins to wilt. Add the noodles, heat for 10 to 15 seconds, then ladle into bowls, adding egg halves to each. Serve right away, with sriracha, lime, and cilantro on the side, if desired.