Managing systems of ‘the unknown and the unseen’

Ed Balicki, who directs the City of Beacon’s Water and Sewer Department, says that while a water system is “designed to last a lifetime and more, as it starts to fail, the question becomes, ‘Why wasn’t it maintained?’”

In Cold Spring, drinking water is delivered through a system built in 1895 from two reservoirs located above the village off Lake Surprise Road. Surface water flows to a smaller reservoir and treatment plant on Fishkill Road before entering pipes that also serve Nelsonville and about a dozen homes in Philipstown, where the vast majority of homeowners have wells.

“The water treatment plant is in fairly good shape,” Matt Kroog, Cold Spring’s superintendent of water and wastewater, said this week, although three filtration units “are showing their age” and will need to be replaced at a cost of $330,000 each or refurbished for $83,000 each.

In Beacon, the system delivers 2.3 million gallons a day from three reservoirs: Mount Beacon, Cargill and Melzingah, which collectively hold 341 million gallons. The city also draws water from two wells on Fishkill Creek and a well field on Clove Creek. 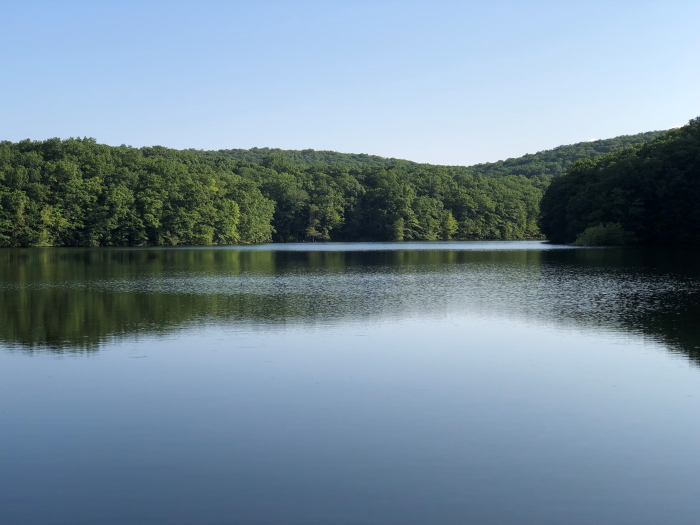 The reservoirs were created from the late 19th century through the 1930s. While the dams need attention, Balicki said a bigger challenge has been the “ever-changing regulatory landscape” because of the effects of climate change. As storms become larger and more frequent, the dams must meet more stringent standards to stand up to them.

Water quality regulations can also be tricky, he said. One of the latest regulations requires cities to test for perfluorooctanoic acid (PFOA), a fluorinated hydrocarbon found in firefighting foam. “They’re now also finding it in places that never used the foam or had industry,” Balicki said. “That regulation came out of nowhere.”

A Water District for 28 Homes

The Garrison Water District is undoubtedly one of the smallest in New York.

That is no longer the case. The district’s wells cannot keep up with demand. In 2018, it also had a 3,000-gallon-a-day leak that took four months to fix.

The system is no longer leaking but usage has risen over the past two years, Shea said, and the town must spend $20,000 a month to truck in water. That cost, he said, is equivalent to the entire water district budget mandated by New York State.

During the summer, the Garrison Yacht Club is a big water user at the Landing, and Dolly’s Restaurant also opened in 2018, Shea noted.

He said the shortage could be alleviated with better conservation. “It’s frustrating,” he said. “With a little effort and more mindful use, we wouldn’t be facing these issues.”

Asked how he would spend the funds if his budget increased overnight, Balicki didn’t hesitate. “Staffing,” he said. “We’d all say we’re stretched thin. There are days when we’re focused on sewer needs, cleaning pipes and making great progress,” he said. But then the crew has to pivot and clear brush at a reservoir.

“It’d be great to have enough staff to keep focused on one task,” he said.

Kroog said the same thing. “We’re a staff of three; there are 3,000 customers, 900-plus connections and about 91/2 miles of pipe,” not including sewers.

The more likely threat to the Hudson Valley from the continued failure to more heavily invest in our infrastructure would be the advent of another superstorm like Lee, Sandy or Irene, where we witnessed the impact of chronically neglected infrastructure.”

~ From a 2017 report by Hudson Valley Pattern for Progress

Even if Kroog’s budget permitted more hires, it’s difficult to find qualified applicants. “It’s not an industry many people seek to get into,” he said, adding that his two colleagues are working toward becoming fully licensed system operators.

Despite any shortcomings, Balicki said he is satisfied with the quality of Beacon’s system. “It’s complex, with multiple reservoirs and wells,” he said. “That blend provides us with a better water supply, but it also creates hurdles.”

The city has been investing in its sewer system at the same time. For example, “last year we upgraded the north interceptor sewer, part of the west side of the city drainage area,” he said, while conceding “we have older sewer infrastructure that can still be a potential hazard. We had a 30-foot-deep manhole collapse on Main Street.”

The city also built a structure over where the sewer enters the treatment plant. The old works were located outside. “You can imagine in subzero winter temperatures how much fun that was,” he said. 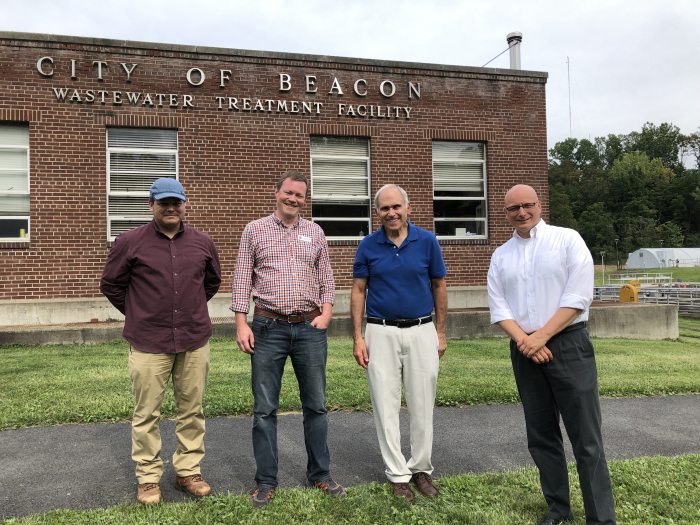 There have been problems with Beacon sewers during major storms, when the plant discharged too much overflow into the Hudson and there were overflows and backups. Even though storm sewers had been isolated, there were still old connections, he said, and homes with sump pumps and broken pipes. In one case, city workers found two 10-inch sewer pipes connected to an 8-inch pipe. “There were bottlenecks that had to be corrected,” he said.

The system is not wanting for capacity. In fact, Beacon takes in wastewater from the Town and Village of Fishkill and earlier this year, then-Gov. Andrew Cuomo enacted a law that allows the city to sell its excess capacity to private firms outside city limits. Beacon gets some of its drinking water from Fishkill sources.

Nelsonville, a 19th-century village with about 625 residents, shares Cold Spring’s water system but not its sewers. Home and business owners rely on septic systems or, in some cases, cesspools that channel waste into underground pits.

For at least four years, Village officials have sporadically discussed installing sewer lines that link to the Cold Spring network, including its sewage treatment plant, which has enough capacity to serve both villages.

Asked on Tuesday (Sept. 21) if the Nelsonville Village Board is still considering a sewage system, or alternatively, ways to upgrade septic systems, Mayor Mike Bowman’s short answer was, “Yes.”

Bowman mentioned the need to deal with a private sewer system on Pearl Street that connects to the Cold Spring system; it serves several properties but has problems, including earlier this year when it caused Pine Street to be partially closed.

But the cost of a comprehensive solution is daunting. “Nelsonville would not be able to fund it alone,” Bowman said. “Any possibility of pursuing any type of sewer project would necessitate a great deal of help from federal and/or state sources.”

What’s especially difficult to manage is “the unknown and the unseen,” he said: Buried pipes. There are at least 50 miles of them in the city, and a catastrophe could be a single failure away. “A pipe breaks, a sewer collapses and two basements end up flooding,” he said. Balicki said he’d also love to replace the cast-iron water mains. “We did a repair and the pipe was stamped 1930,” he said. “A pipe can last 100 years, but eventually it’s going to have continuous issues.”

Balicki said he would like to see Beacon adopt “smart meters” that make it easier to detect leaks. Given a larger budget, Balicki said he also would improve the de-watering equipment at the sewage treatment plant. Currently, sludge is squeezed between two belts to remove the water.

“It’s one of the best systems in old-school de-watering,” he said, but centrifuge technology is available that spins the sludge to remove the water. “That’s one thing we’re looking at.”

Kroog said the Cold Spring system functions well, but he would love to have granular-activated carbon filters, a “polishing” system that removes byproducts of the chemical disinfection of water. They can also help eliminate “rotten egg” smells and chlorine taste from treated water. There’s also microfiltration, which separates microorganisms and suspended particles from wastewater.

The big decision for the village, Kroog said, is what to do about its reservoirs, where the dams need major repairs. Last year, in a study commissioned by the Hudson Highlands Land Trust, Chazen Engineering recommended the village establish a well field along the Clove Creek aquifer, which would eliminate the need for reservoirs, or to refurbish them. 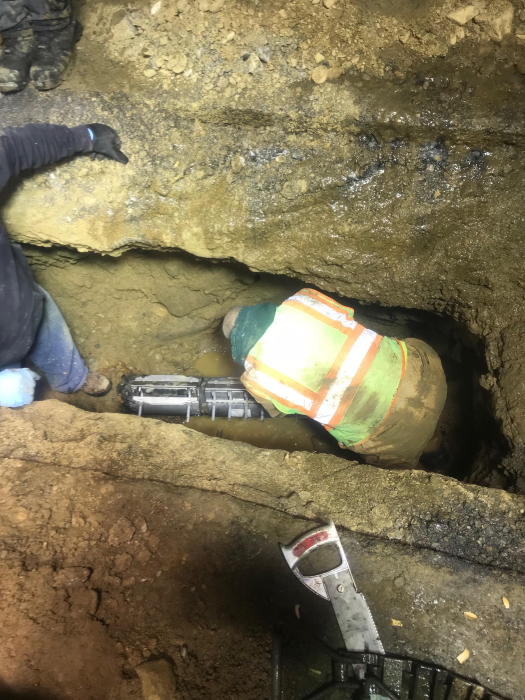 Switching to wells could also end Cold Spring’s need to tap into the Catskill Aqueduct, which crosses the eastern edge of Nelsonville. For the past 15 years, the village has been negotiating an agreement with its owner, the New York City Department of Environmental Protection, to use it as an emergency water source, especially during dam repairs.

Leaks have been a problem at times in the 125-year-old water system, but Kroog has largely dodged that bullet. “In the two years I’ve been here, there’s been a leak maybe once every six months,” he said. “And that has been on service lines [that extend into homes], not the mains.”

At present, Cold Spring has more than enough water, he said, averaging 220,000 to 250,000 gallons in daily usage. In addition to the reservoirs, the system includes two 285,000-gallon storage tanks. He said that, compared to other systems he’s seen over the past quarter century, Cold Spring’s rates in the top 15 percent. 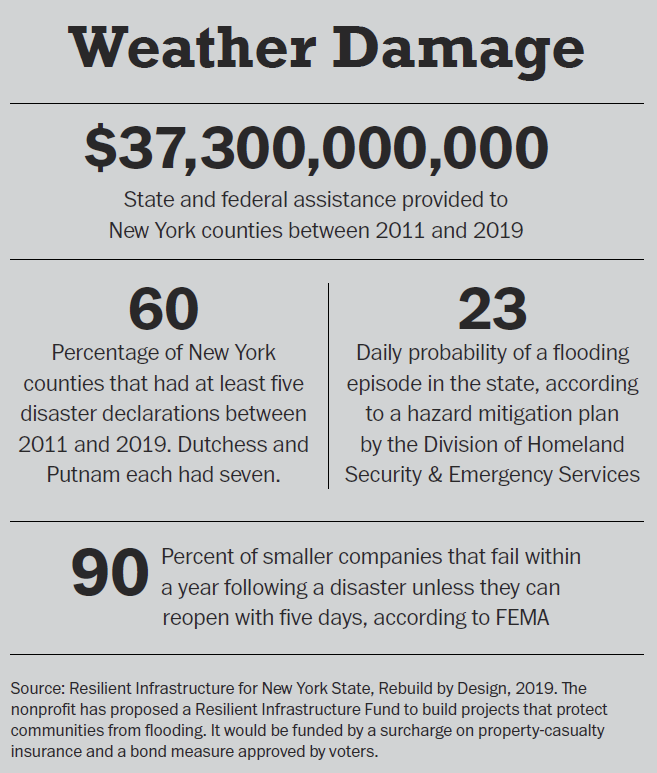 The sewage treatment plant is newer, going online in 1972, but also doing well for a 50-year-old plant, he said, because of continuing maintenance. The plant is designed to treat up to 500,000 gallons of wastewater a day and the village produces between 180,000 and 220,000 gallons, he said. (It doesn’t handle stormwater.)

Kroog said there haven’t been any major blockages or sewer leaks in the two years since he succeeded Greg Phillips, who retired after 22 years. “It’s basically a preventive plan, getting inspections done, and trying to keep up with the system.”