Man of few words was well-known around Beacon

Beacon police are investigating the stabbing death on Christmas Day of Rene Vivo, a 65-year-old veteran known to locals as “Scout.” 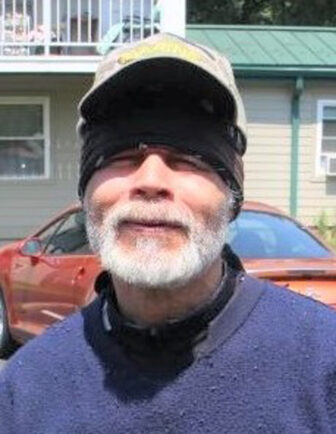 While the assault was widely discussed on social media in the days after it occurred, the Beacon Police Department has released few details. No arrests had been announced as of Thursday evening (Jan. 6).

Citing “multiple sources,” Mid-Hudson News reported on Dec. 29 that a person known as “Scout” had been fatally stabbed at about 3:40 p.m. on Christmas Day. [The article has since been removed.] A day later, the Beacon police issued a statement confirming a Dec. 25 stabbing but without providing a name or mentioning a fatality.

The Mid-Hudson report said Mayor Lee Kyriacou had confirmed the death; Kyriacou did not respond to a Dec. 29 inquiry from The Current.

Libby Funeral Home posted an obituary for Vivo, and on Monday (Jan. 3), Beacon police confirmed he had been the victim. He was found on South Brett Street, near Main Street, the police said; the obituary said Vivo died at Montefiore St. Luke’s Cornwall Hospital in Newburgh.

Chief Sands Frost said the department was not releasing information because it might compromise its investigation. “We have to think of the victim,” he said. “If that means withholding information and looking like the bad guys, we’ll do that for now.”

In a statement on Dec. 30, five days after the killing, it asked that anyone with information contact the department and said that “at this time, it appears to be an isolated incident, and there is no danger to the residents of Beacon.”

According to a police blotter entry, Vivo was arrested on Dec. 15 and charged with second-degree assault following an incident on Main Street. It was not clear if incident was related to the assault on Vivo two weeks later.

On Wednesday (Jan. 5), the department denied a Freedom of Information Law request for the police report on the Dec. 25 stabbing from The Current 29 minutes after it was submitted.

If the death is found to be a homicide, it would be Beacon’s first in five years. A 25-year-old man visiting the city was shot to death in 2016 at the Davies South Terrace apartment complex; no arrests were made.

In 2019, a man was stabbed to death in Beacon but a grand jury found that a suspect had acted in self-defense.

Selaine Garcia, who identified Vivo as an uncle, established a GoFundMe campaign online that raised $10,708 for funeral expenses. 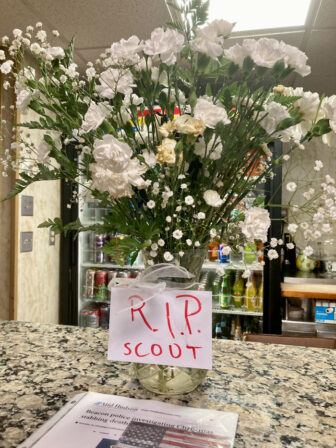 A bouquet of flowers at BJ’s Restaurant to remember Rene Vivo (Photo by J. Simms)

Garcia wrote that Vivo “was beloved in the Beacon community. He was a quiet, gentle man. My family and I loved him dearly. We are devastated at the thought of how he may have spent his final moments.”

Property records showed that Vivo lived at the Forrestal Heights apartment complex. He is survived by his sisters, Iris Colón, Ginette Velez and Yolanda Colón. A wake is scheduled for Sunday (Jan. 9) at Libby Funeral Home.

Vivo grew up in the violent, high-crime Bronx neighborhood known as “Fort Apache,” and moved to the Highlands after serving in the U.S. Marines, said David Eberle, a friend who connected with Vivo because both men had served in the military.

To most, Vivo was known for walking around Beacon alone, often wearing near head-to-toe camouflage, but “I knew him quite a bit better than that,” Eberle said. “He was a very quiet man who had not had an easy life.”

Eberle said that Vivo suffered post-traumatic stress disorder after his time in the Marines, and for that reason was mostly a loner. “I think a lot of that had to do with keeping problems inside. When I got to know him, he was a kind and caring person,” he said.

Eberle said that Vivo helped him from time to time with handyman projects around the house. Vivo had spent the night at his home about a month before he was killed.

Vivo also helped out at BJ’s Restaurant on Main Street by sweeping the sidewalks, cleaning, sorting recyclables and stocking soda shelves. Showing up before daylight, he would occasionally make runs to Key Food if a delivery was delayed.

“All that’s missing right now is Scout,” said Brenda Sims, who co-owns the restaurant with her mother, early Wednesday morning while prepping the kitchen. “He would be up front right now doing his routine.”

Sims served as a master sergeant in the U.S. Army before retiring in 2004, and shared the military bond with Vivo, as well. “He was still a soldier out here on the street,” she explained, noting that Vivo continued to train by himself “in the mountains.” 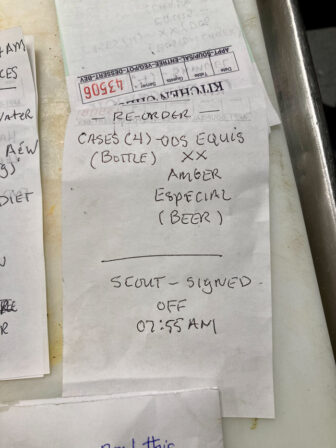 A note left by Rene Vivo for Brenda Sims, the co-owner of BJ’s Restaurant, after he took inventory. (Photo by J. Simms)

She agreed that Vivo walked as much as he did because he found it therapeutic. “That was his release. Some people go for a long run to clear their head; his was going out to walk,” Sims said. “Sometimes I would pay for him to take an Uber, but more often than not, he wanted to walk.”

Sims shared notes Vivo had left for her after stocking or rearranging shelves at the restaurant. Signed “end transmission” or “signed off,” the notes were timed and dated, detailed reminders of products that needed to be ordered.

Sims said that she fed Vivo a Christmas meal on the day of his death. That morning, she recalled, he’d hugged everyone working at the restaurant.

“He was an asset,” she said. “He did everything to help this place operate on a daily basis.”

Eberle said on Tuesday, 10 days after Vivo’s death, that he was reminded of the chorus of James Taylor’s “Fire and Rain”:

I’ve seen sunny days that I thought would never end

But I always thought that I’d see you again

“You don’t always [see them again] and you wish you’d had the chance to say some other things,” he said.

One thought on “‘Scout’ Killed in Christmas Day Stabbing”