Memories of the original Howland 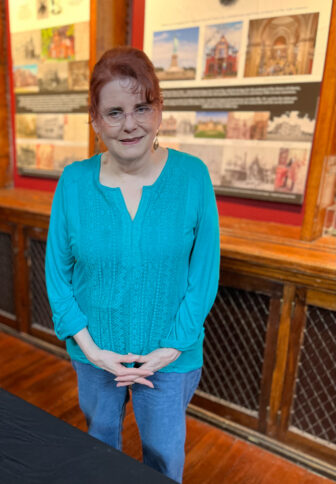 Cornett at the former library

Joan Cornett worked at the Howland Public Library in Beacon as an assistant for a decade, beginning in 1963, when it was still located at what is now the Howland Cultural Center. She left before the library’s move to 313 Main St. and later took a job with IBM.

Cornett recently visited the former library to reminisce in anticipation of Howland’s 150th anniversary celebration, with events scheduled for August and September, including a reception at 5 p.m. on Friday (Aug. 5) at the cultural center. Her recollections — aided by scrapbooks shared by Howland librarian Michelle Rivas — proved sharp.

I’m glad this building is still here. We had great architects around here. The children’s area was to the right [as you entered]. There were two walnut globe stands and three sets of encyclopedias, including Britannica and Colliers. Those couldn’t be taken from the library. There wasn’t a lot of children’s programming, but I kept in contact with some of the children who came in as they grew up.

There was a lending library, and art lending, too. There were many books we didn’t have; we’d put in a request to the Adriance branch [in Poughkeepsie].

The fiction area was over here. Cards [for the catalog] had to be typed by the librarian’s secretary. Each card was stamped, using black India ink, which got all over everything. Every so often I’d find a card that had fallen somewhere, and then I had to search out the book that was missing its card.

In the back, the whole wall was shelves of biographies and autobiographies. There were hand-typed labels on everything, stuck on with glue. Plastic [book] jackets came in after a while.

Marie Eberle was the secretary to Marion Davies, the librarian, who began as an assistant librarian in 1929. Miss Davies had rheumatism and couldn’t climb the stairs, so Marie did it.

There was a branch [at 210 Main St.] that was open for two months each summer during the early 1970s.

Overdue books cost 10 cents a day. We had to write out little pink slips with the borrower’s name and phone number and the day they took the book out. If they didn’t return it on time, we had to call them up. I also sent out notices. On Monday, when the notices usually reached people, a lot of books would be put through the [return] slot. There was a cart next to the slot, which all of a sudden got loaded. We had a part-time worker who went around to people’s homes to collect, for a while. It was an interesting idea that didn’t work out.

In those days, we were paid our salaries in cash, in little brown envelopes. We had magazines like Time, Look and Life upstairs. One day a high school student asked me for a magazine stored upstairs. It took me a while to find it. After I closed the library, I picked up my bag and there was no money in it at all. We called the police station, and they sent over a patrolman, William Cornett. Last week we celebrated 49 years of marriage!

I found the Howland job through a small ad in The Beacon News. In high school I had an amazing teacher who loved books. She gave me that gift. I saw her again years later, at a dance, and thanked her. She started to cry, and I started to cry, that someone had remembered.

The library had some unusual items. There was taxidermy: 25 birds on branches with fake moss. A descendant of Madam Brett donated them. It was a Victorian thing. In the basement, dusty and dirty, there was a roll-top cabinet where cat mummies were found. I have my doubts they were genuine — I think they were wrapped up to look like mummies. In Egypt, cats were worshipped. Mine are.

My favorite memory was getting the first crack to check out a good book. I’d never give myself the full five days to read it, because I knew people were waiting.

Beacon History, Up Close and Personal
‘People Make it Happen’