Here is one thing I don’t understand: Ratatouille.

I realize that it’s difficult to resist the impulse to make it. I, too, have moments every September when, surveying my larder for dinner ideas, I notice zucchini, eggplant, tomatoes, onions, and peppers, and very nearly think: ratatouille. But I don’t! I refuse to even let that thought form! And I wish more people would do the same. Because you put all those ingredients together and what you come up with is a dish that is not better than the sum of its parts – not even better than any one of its parts is alone, roasted or sautéed with a little olive oil, garlic, and salt. 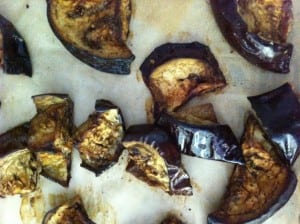 I suspect I am in a minority here, because otherwise why would ratatouille continue to turn up so frequently? I was served it twice in the past three weeks alone. Plus MFK Fisher liked it, and she was a genius. In The Cooking of Provincial France, published in 1968 as one installment in the legendary Time-Life cookbook series, she mentions it several times, once in a section titled “A dish that’s always good the next day.” Which suggests that it is good to begin with.

On the other hand, maybe the mere fact that it was good in 1968 means that it’s time to retire it, at least temporarily. If it disappeared for 15 years, the way quiche sensibly did (and Miley Cyrus ought to do), I expect we’d all be pleased to welcome it back into our lives again afterwards.

Meanwhile, we can find other, delicious things to do with zucchinis, eggplants, and tomatoes. Just, please, not all at once.

A few years back, inundated with late summer vegetables – and craving something crisp and salty – I started experimenting with frying them. The results were wonderfully good, but only for a little while. It’s hard to maintain a vegetable’s texture once it comes out of the frying pan. 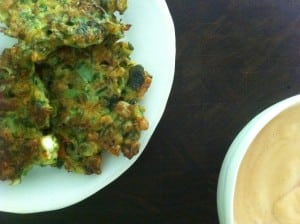 That’s because most vegetables naturally contain a lot of water. According to the University of Kentucky’s cooperative extension service, zucchini is 95 percent water, tomato 94 percent, and eggplant 92 percent (the same as a watermelon). So even when you fry them – even when you dip them in tempura batter and deep-fry them (an excellent way to make them, by the way) – they have a tendency to steam in their own juices and turn soggy before long.

To get around this, many cookbooks suggest salting sliced zucchini and eggplant before cooking it, then leaving it to drain in a colander. This helps, but only somewhat, unless you squeeze the vegetables hard, like you’re wringing a cloth dry. Otherwise, water remains trapped within and you wind up with a dish that’s only slightly less soggy and often over-salted to boot.

For eggplants and tomatoes, roasting may be an easier route to happiness. Indeed, roasting them makes me so happy that I prepared three eggplants and five tomatoes this way while writing this (one downside of writing about food is that it makes you hungry). First, I cut the eggplants into smallish pieces, then tossed them in olive oil and salt, spread them on a baking sheet, and placed them in a 425° oven for about 20 minutes, until they turned brown and crisp. Then I ate most of them, semi-mindlessly, like potato chips.

Meanwhile, I sliced the tomatoes and placed them in the oven, then puréed the result with yogurt, garlic, and spices to make a dipping sauce.

As for the sauce, it became the perfect accompaniment to zucchini fritters, which we had for dinner last night. Everyone ate sitting at the counter, one batch at a time as it came off the stove, so that the fritters were at their crispiest. I have tried keeping them warm in the oven and serving them all at once. The fritters are not quite as nice that way, though they are still fine. And if you have leftovers, you can refrigerate them then pop them in the toaster whenever you like. Because, just like that persistent, stewy ratatouille, they are good the next day.

Make the sauce ahead of time – the tomatoes take time to roast, and the sauce needs time to rest before serving.