I swear some days I feel as if I’m living inside a fairy tale. Not the princessy kind with helpful mice and mighty steeds, but a Grimm one in which children turn into wolves the moment they set foot inside the house each day – ravenous wolves who must eat for 15 minutes straight in order to break the spell they’ve been put under and turn back into normal kids again.

Goodness, the calories! I think as I stand by the cupboard, clutching my apron and watching them transfer an entire liter-jar of homemade granola – a quantity I’d expected to last several days – to their mouths. I am equal parts aghast and jealous; the latter because they can consume so very much without negative midsection repercussions.

They are lean and strong and growing, these wild pups of mine. And I do not get in their way.

But there are other days when I happen upon them in the kitchen and an altogether different kind of tale is unfolding: George or Henry is at the stove, making a pot of pastina for the three of them, while one of his siblings grates Parmesan and another gets out bowls and spoons. 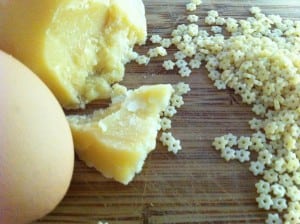 I have trusted them to cook for a long time. Children are capable of so much more than we often give them credit for, and can be prudent and safe from a very early age, so long as they are focused on one task at a time and understand the rules – one of which is they can’t turn on the stove unless an adult is in the house.

Which I am, of course, when I enter the kitchen and find them at their work. They adore pastina, and treat it with great care combined with a kind of ceremonious excitement. It’s easy to see why. The dish is the quintessence of comfort food: simple, nourishing and delicious. Here’s how they make it: In a small pot, they boil tiny noodles (stars are best) with a little more chicken broth than the noodles can absorb by the time they’re soft, then they mix in a lightly beaten egg or two, which cook in the heat of the noodles. After that, they dump in a few handfuls of Parmesan, and mix that in. That’s it.

The result has the consistency of risotto, only softer.

This preparation came into our lives via Peter’s graduate-school housemate, an Italian-American named Paul Pasquarello. Though shy and a little goofy, Paul has become a great legend in our house for the handful of dishes he taught Peter to make on the many late nights when the two of them bicycled home from the GSD long after suppertime. Pastina was their ramen. It kept them alive when charrettes threatened to do them in.

As Peter remembers it, Paul told him that every Italian child grows up eating pastina. But this turns out to be only partially true. Yes, pastina is what bambinos eat after graduating from rice porridge and mashed yams. But in the traditional Italian version, the noodles are cooked with milk, not broth, and finished with butter.

Humph. I like ours better. It has more flavor and more nutrients – thanks to the broth, eggs, and magical Parmesan.

Of course, legends evolve and grow, just like kids. Mine have taken to calling their version “egg drop soup,” despite my repeated efforts to convince them that this name is already taken, by a slippery Chinese concoction, no less. They do not care. Children invent the language they need to tell their own stories.

And so do their moms.

Pastina with Parmesan and Eggs