The nip may not be in the air yet, but sign-ups have already started for the Garrison Art Center’s fall classes. Amidst the lineup of returning instructors is a new — and memorable — name: Summer Pierre, who will teach a class for teens and adults on writing and drawing for comics, something Pierre, an illustrator, has focused on a great deal over the past few years.

Pierre, who moved to this area about two years ago via a path which took her from Massachusetts to California to Brooklyn, wrote and illustrated professionally for years before turning to drawing and writing cartoons a year and a half ago. The move from Brooklyn to the Hudson Valley was a catalyst. “It was kind of a shocking change and as I was finding my footing I found myself chronicling my daily life in a comic — a page a day — and doing this was a powerful practice and felt very natural,” Pierre relates. “One thing I love about comics is that there is a clear context — it’s more intimate — there’s something about the boxes. And though it can be a single page, it’s very evocative,” she continues.

Pierre doesn’t plot out topics or themes or even storyline. It’s more a matter of “one little thing happens, and then it blooms into something larger,” she says. On her eponymous website, Pierre divides her cartoon work into three aptly-named categories: diary comics, comic stories and one-page stories. Though the diary comics add up to a greater whole, each one can be taken on its own — “You don’t need to know the larger story,” Pierre explains. “They’re a bit like poems: a small, contained experience.”

Pierre ventured into teaching cartoon drawing and writing in a class she recently offered at West Point. The participants turned out to be a mixture of cadets and children, ages 9 to 13, from the community, and Pierre calls it an “incredible experience, possibly because it’s not intimidating — it’s a very accessible storytelling medium. And what they came up with was totally original and really funny.” She expected a good dollop of teenage snark; the work turned out to be more personal. “What got on the page was a lot of tenderness,” she said, and Pierre thinks she knows why: “Through cartoons you can express very hard things and complicated thoughts — it feels accessible to go into deep places.” Pierre particularly enjoyed working with the cadets, noting: “Such a story-specific time makes for a wonderful playground for comics.” 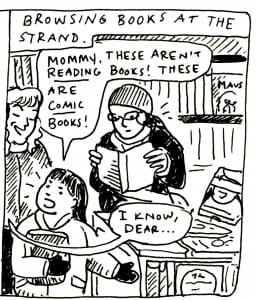 Pierre emphasizes that one does not need to “know how to draw” to take the class. “To do comics, you just need to be willing to try,” she says. “It can be stick figures. One woman told me ‘All I can draw are ants’ and I said ‘You can make a comic out of that!’ The visual, whatever it is, is part of the narrative.”

To start things off, Pierre often uses an exercise borrowed from cartoonist Linda Barry. “I ask them to draw Batman in several situations, on index cards. Then we move the cards around into different orders, and you can see how this can change the story. Then we usually do some writing exercises, deriving stories from everyday life.”

Pierre studied writing and art in college — separately. After a period of time spent immersed in another art form, as a musician in Boston, she returned to illustration. In addition to her cartooning, Pierre has had an extensive career in illustration and has combined this with some interesting private commissions. One of her specialties is working with people and producing an image, which illustrates a part of their life that is very much “them.” This involves a bit of interplay, beforehand, as “people don’t know, at first, what that image should be. Usually I ask them ‘What feeling do you want when you look at the picture?’” In another vein, Pierre draws what she calls “custom book portraits.” These are drawings of actual copies of people’s favorite books for, as her site explains, “in them you can see the wear and character the book took on as it moved, traveled, and lived with that individual … They tell our stories of love, intimate experience and identity.”

The Drawing and Writing Comics course will take place on four Saturdays, beginning Sept. 27, from 2 to 4 p.m. The cost is $140.

Art for all levels

Also on the roster this fall at the art center are a Collage and Assemblage class taught by Jaynie Gillman Crimmins and both Portrait Drawing and Drawing Beyond the Basics, for all levels of experience, taught by P. Emmett McLaughlin. 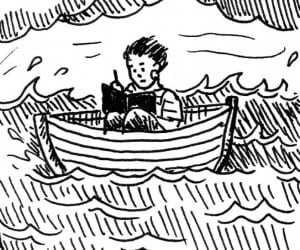 The art of music is addressed in Clawhammer Banjo on the 5-string with Jeff Crane — a beginner class in which the goal is for banjo students to eventually join in with Harry Bolick’s Fiddle and Mandolin class and “get this place hopping every Thursday night!” according to the center. And then there’s “the art of writing about art”: a phrase which could be dissected during a session of Art Writing & Blogging. This class will “challenge participants to critically analyze how language is used in different settings and to make effective use of language in their own writings” according to its description.

Back again this year are free special workshops for seniors, held at the Cedar Street Friendship Center. Tracy Strong will guide participants in making 3-D Paper Creations and Kathy Curto, who conducted a similar and successful series last year returns, in partnership with Strong, with Reading Flavors, Tasting Words — Writing about Food in our Lives.

For descriptions of these and the many other art center class offerings and to register online, visit garrisonartcenter.org or phone 845-424-3960.

NOTE: Summer Pierre will be giving an artist’s talk at the Highland Falls Library at 7 p.m. on Sept. 10.