Occasionally we all have an unpleasant experience with a meal. Not full-on food poisoning, serious and often triggered by eating contaminated items, but mild cases of digestive distress and just enough of a nuisance to carve out a place in our memories for a painful recall each time the substance presents itself.

For a time, my family avoided coconut in any of its forms. The continuing ingredient aversion was all linked to a childhood fascination with a big brown coconut. During a visit to Florida to see their grandparents and numerous other extended family members, our sons managed to find a backyard coconut that they claimed with curiosity. It looked harmless enough but we had no idea when the fiber-filled fruit may have fallen from its palm tree. It wasn’t stamped with an expiration date but didn’t seem to have an odor, so we let the kids hang on to it. Soon enough, after tossing it around for the day, they wanted to crack it open for a tropical taste of their newly acquired exotic food. 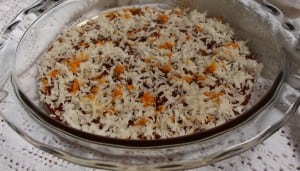 With help from Poppy, their grandfather, who gave it two good whacks with his ax, the coconut cracked open and the boys were the first with their hands in the air to try the white flesh and the sweet clear liquid found inside. A couple of aunts and uncles joined them in the sampling, making the experience a true family affair. Later that evening, those who fell for the fruit of the coconut palm (Cocos nucifera) weren’t feeling too well, some necessitating emergency stops on the Florida Turnpike. Thankfully, the reaction was mild, but we took a break, even if unintentional, from coconut. No cream pies, no coconut-coated shrimp, not even a creamy tropical summer cocktail.

But that’s all changed and coconut is back on the menu, though we’re no longer collecting random coconuts that are just lying around going rancid. In the form of liquid to sweetened shreds, coconut continues to surface in restaurants and in recipes from friends. My friend and grad school mentor Jane introduced a tofu-coconut milk soup to our family last month, and its sweet-smelling base makes a great starter for a number of summer vegetable soups. Out and about, the key lime truffles with coconut sauce at Blu Pointe in Newburgh (the newish restaurant in the space formerly operated by Torches on the Hudson) should help to sway diners into dessert after every meal. And I’ve recently adapted a flan recipe from a friend from Puerto Rico who carries on a tradition of doubling her recipe whenever making flan.

The second flan finds its way to a friend’s table. It’s unthinkable to turn away one of Rosie’s beautiful baked custards that are made for sharing. She creates a rich and silky-soft flan coated, but not smothered, with golden caramel sauce. 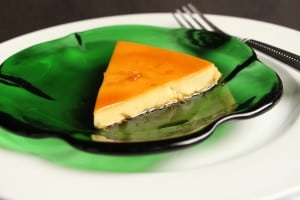 This flan variation takes on a hint of summer with the addition of lime or orange zest as well as shredded coconut and coconut milk. For those who want to keep their ingredients the freshest with this precious egg dish, crack your own coconut       and consider shredding chunks of the fresh mature flesh or extracting liquid by grating small pieces of the fruit. The process of cutting the white fleshy meat away from the shell and blending it with a little warm water doesn’t take too much time, but you’ll also need to strain the liquid to remove any remaining pieces of fiber from the pressed coconut. Canned unsweetened coconut milk works well and minimizes prep time to create this delicate dish that can be served any time of day.

If home cooks can make time to whack or drill a coconut, it’s probably wisest not to select those that may be found under a palm tree in someone’s backyard.

Heat coconut milk, milk and salt. Bring to a boil and remove from heat immediately.

Pour over coconut layer in pie dish. Set pie dish in shallow pan filled with water to cover bottom half of pie dish.

Bake on center rack in oven approximately 50 minutes until flan is set. Remove pan from oven and carefully lift pie dish from water.

Run a thin knife around the edge of the dish to loosen the flan while still warm. After flan cools for at least 1 hour, invert onto a larger platter or rimmed plate to keep sauce contained. Serve at room temperature, chill for 2 hours or refrigerate overnight and serve next day.