“What I love about cooking is that after a hard day, there is something comforting about the fact that if you melt butter and add flour and then hot stock, it will get thick! It’s a sure thing in a world where nothing else is sure, it’s a certainty, the stock will thicken!” ~ Nora Ephron, Heartburn

I love that too! And I also love the fact that there’s so much you can do with that roux once it thickens and yet it all still adds up to the same end: a warm, nutty, savory sauce that promises comfort food worthy of Ms. Ephron’s reverie. This is a very good thing as the leaves begin to color and the winds start to blow cold.

The science of a roux is simple. Formalized by the august French chef Escoffier in 1902, the “mother sauces” of classic cooking are all variations on this incorporation of flour into fat. Browning adds depth to both the color and taste, and the thickened sauce (heated, stirred and watched closely) becomes a stable medium for the suspension of other seasonings, as the basis of either a finishing sauce on its own or a luxurious braising bath for meat, vegetables or seafood.

Here’s where alchemy comes into play.

Recently, a culinary gauntlet was inadvertently dropped by my meathead pals at Marbled Meats. As Chris Pascarella unpacked the latest delivery of Glynwood beef he wondered aloud (and conspicuously within earshot) about what to do with an increasing stockpile of cube steak.

I do love a challenge.

Processed from the top or bottom round, or occasionally the sirloin, the selected steak is run through a tenderizer. It receives a proper pounding from the blades or rollers, leaving distinctive “cubed” markings on the large, thin medallions that emerge.

This cut is less popular and expensive than others and consequently is a staple among the many vernacular cuisines of the world. Its thinness accounts for another of its names — minute steak — as a quick sear will render these large medallions quickly, and at the least, edible. Another Southern and Midwestern variation is “chicken fried steak,” the breaded, fried and ballyhooed preparation whose charms escape me.

At its most generic and institutional, cube steak plus a stock-thickened roux forms the basis for the nefarious “steak and gravy,” usually served atop mounds of mashed potatoes, a menu staple of roadside diners. But the sensitive addition of spices, mushrooms and onions and other vegetables can, with the proper care, produce comfort food of the highest order.

That which brings me to this week’s recipe: grillades.

As a bayou-born son of the swamp, the sound of those words brings me great joy. Say “grillades” (pronounced “gree-yahds”) to any proper (or would that be improper?) South Louisiana native and the response is generally “Yumm!” Grillade translates as “grilled,” which is where the confusion begins. The medallions are actually dredged in seasoned flour and seared and browned in oil. 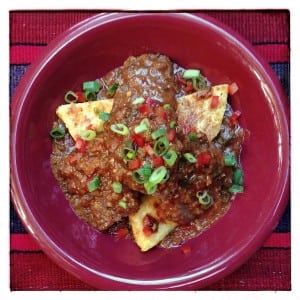 I mentioned alchemy but what follows is closer to voodoo: the so-called “trinity” of Louisiana seasonings — onion, bell pepper and celery — are sautéed amidst the crusty bits left from browning the meat in the skillet (along with your de rigueur garlic and seasonings). The addition of stock and a couple of chopped tomatoes produces a luscious, quick braise.

Grits and grillades (as the latter are seldom served with anything else) are a pillar of traditional New Orleans breakfast and brunch menus from the highest Creole French to the most humble Cajun table.

This Hudson Valley version was prepared with Wild Hive polenta, although quality grits (as if there’s a major difference) are available at Nature’s Pantry in Fishkill. The soy sauce or tamari isn’t traditional but I find it adds depth and color to the gravy. Maybe it’s not magic, but it is magical.

Serves six to eight (preferably over grits or polenta)

Mix flour, thyme and black and cayenne peppers in a large, shallow plate or bowl. Heat oil to medium in a large skillet or Dutch oven.

Dredge beef scallops individually in flour mixture to coat and fry in batches of 5 to 6 (do not crowd) for 3 to 4 minutes per side. Remove, drain and reserve until all are cooked. Do not clean pan between batches — you want that crusty stuff. Add oil as necessary to keep from sticking.

When all the beef is cooked, add onions, celery and bell pepper to the skillet, stirring for about 3 minutes to loosen crusty bits. Add garlic and cook as before for another 1 to 2 minutes. Add beef stock, stirring to loosen and incorporate browned bits. Add tomatoes and soy sauce and simmer for a half hour.

Return beef to pan and cook for another half hour. (This is an excellent time to prepare the grits or polenta.)

Add chopped parsley and serve over hot grits or polenta with sauce.

* There are those who say that, traditionally, bacon fat or lard should be used. Then there’s the butter and olive oil camp or even vegetable oil (ugh!). I used ghee because it was there. I say whatever works for you.

One thought on “Small, Good Things: Hoodoo You Love”