When I asked my kids at the beginning of the week if there was something — anything — I could do to make their mid-winter/Presidents’ Day breaks more interesting, I got shrugs.

Fine with me. I’m down with a case of winter inertia as bad as any teenager’s.

Well, not any teenager. Not, for example, those 17-year-olds winning gold medals in Pyeongchang, who don’t seem to realize that it’s February. But although watching Chloe Kim and Nico Porteous whirligig through the air elevated my heartrate, and googling Adam Rippon required a certain level of manual dexterity, my fit of indifference wasn’t sitting well with me. I’ve never been comfortable with the idea of doing nothing.

For much of my life, I had my own internal Julie-the-manic-cruise-director to spur me along on my personal journey (which has in no way resembled either The Love Boat or the Olympics, mind you). During a trip a friend and I took to Montana in our 20s, I wanted to cram so many experiences into each day that I woke us both up at 5 a.m. with a rise-and-shine, time’s-a-wasting roar.

She hated it, resented me, and lay defiantly in her bed while I stomped off to embrace the moment. We soon compromised and had a wonderful trip: Eight days that felt like a month, so full were they with adventures (and just enough sleep). 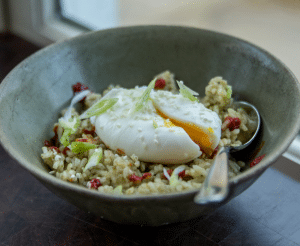 Winter gold, in honor of Korea (Photo by Henry Weed)

There’s a huge payoff to getting off your tochus. The more you bother, the richer life becomes. When the kids were little, I felt compelled to pass this wisdom along to them, organizing spontaneous ice-skating trips to Bear Mountain or mushroom-spotting hikes into the forest. I insisted they learn to ski early, since I, growing up in flat-as-a-griddle Indiana, hadn’t tried it until I was 26, by which point I was far too old to be fearless, or good.

Yet sometime in the last decade, I began living my life as if it were a real-life motivational video designed to convey just the right lesson to my target audience. Perhaps that’s why inertia has me in its grips these days. My teenagers no longer look to me for inspiration. (Actually, they do, I tell myself. They just won’t admit it.)

So when Dosi came to me the other day and said, “Can I make nachos for supper?” I said sure. Because at that moment, nachos sounded great, and nachos made by someone — anyone — other than me sounded positively gourmet.

Then Dosi said, “Can I make them for just me? I don’t like the pressure of cooking for everyone,” and I realized I had to get off the sofa and feed my family. 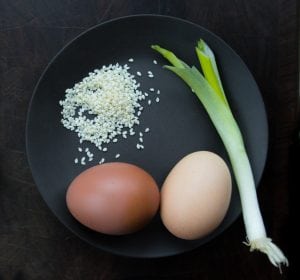 I actually have a great repertoire of next-to-nothing dishes that I turn to when I’m feeling lazy. This recipe originally came to me via a Korean friend, but has long since become a family staple because it is satisfying on so many different levels. It’s comforting and nourishing, but also aromatic with scallions and sesame oil, and invigorating thanks to the sriracha. And if there’s leftover rice in the fridge, it can be ready in five minutes, so the kids often make it for themselves as a snack.

Here’s a thing about old life lessons: They work, even if you’re feeling blue. All I had to do was get myself into the kitchen, and motivation started seeping into my cell membranes. I wound up cooking happily and more elaborately than I’d expected. To wow my judges, I cooked the rice in water I’d first pureed with fresh spinach (a trick borrowed from Mexican and Middle Eastern rice dishes). The result? Yeah, okay, teenagers don’t cheer for their own mother, but they did say, “This is so, so good.” It’s medal enough for me.

You can substitute plain rice for green, and fried eggs for poached.

Prepare rice according to package directions, pureeing the spinach and scallion tops with the water and salt in a blender before cooking. When cooked, fluff with a fork then set aside, covered, until ready to serve.

Bring 1½ inches of water to a simmer in a heavy-bottomed saucepan. Stir in the vinegar. Crack one egg into a small bowl or cup, and slide it gently into the water. Repeat with remaining eggs, spacing them evenly. Cook at a bare simmer about 3 minutes, until the whites are set and the yolks firm on the outside but still wobbly within. Transfer to a plate using a slotted spoon and set aside.

Divide the reserved rice among four bowls. Set a pat of butter on each. Top with one poached egg. Drizzle with sesame oil, soy sauce and sriracha. Sprinkle with scallions and sesame seeds, if using.