There were several summers when I ate cold celery soup all the time. All the time. I kept a quart jar of it in the fridge from mid-June through August, sipped it for lunch or snack, and carried a Thermos of it with me whenever I set off for a long, busy day in the hot city.

I’d first tasted this particular soup on a photo shoot in the Hollywood Hills, at the swank house of an A-list actress whose dinner party we were featuring in a magazine. Her personal chefs, a couple of lovely and down-to-earth sisters, explained to me that the actress had been subsisting on powdered diet shakes and protein bars before they came along and introduced her to the idea that food could be fresh, clean and nourishing, as well as paparazzi-friendly.

I have never had to worry that paparazzi lurking at the end of my driveway or helicoptering over my infinity pool might catch me looking less-than-perfect. Nonetheless, I became devoted to this soup, which manages to conjure, from nothing but vegetables and broth, flavors that are almost poetic: complex, fragrant and enticing as well as comforting and soothing.

The secret is celery.

These days, we Americans regard celery as a dull staple of the crudité dish, a workhorse vegetable with about as much flavor as a garden stake. But that’s only because we’ve forgotten how to taste it. Lovely celery has been victim of its own popularity. 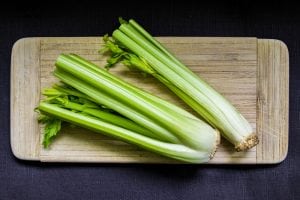 The secret is in the stalk. (Photo by Henry Weed)

In the early 1800s, raw celery — herbal, peppery and slightly astringent — was a rare and exotic delicacy on Northern European tables (wild celery had been consumed medicinally around the Mediterranean and Caucasus region for millennia). Victorian chefs and hostesses developed an obsession with it, and by the middle of the 19th century, celery was de rigueur at fancy dinner parties, presented in vases designed specially to show off its slender stalks.

Celery’s moment of fame lasted a remarkably long time. It was still chic enough to be served on the Titanic in 1912, and equally classy 40 years later, when President Eisenhower offered it at a dinner in honor of the king and queen of Greece. But eventually, success bred indifference. These days, celery is as common as sliced bread — or over-exposed movie stars.

My affection for celery soup followed a similar trajectory. After a slew of summers when I couldn’t get enough of it, one day I suddenly could. The last time I made it, about five years ago, I found its flavor had grown almost off-putting. I was over it.

Why do we humans do this to ourselves? We fall hard for something — song, TV show, person, food — then binge on it until we’ve drained all the magic from it.

Fortunately, the aversion is seldom permanent. 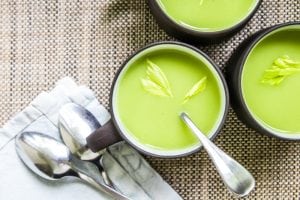 A couple weeks back, I found myself hosting a lunch with barely 24 hours’ notice (in trying to find a mutually agreeable day, we’d realized that the only possibility was tomorrow). Oh help, I thought. Then: Well, OK, what’s in the fridge? The answer, of course, was celery, along with random handfuls of other vegetables. I realized I had everything I needed for this formerly beloved soup. Moreover, I knew I was ready to open my heart to it again.

It tasted wonderful. One of my guests, a highly regarded gourmet, even requested the recipe. I put the leftovers in a Thermos, and took them into the city with me the next day.

As I passed by a newsstand in Grand Central, I noticed a familiar face on the cover of People. The celebrity, too, was once again in the news.

Adapted from The Family Chef, by Jewels and Jill Elmore and Ann Marsh

Heat a soup pot over medium high. When hot, add a splash of olive oil, then throw in the onions, leeks and fennel. Reduce heat and cook until translucent (do not brown).

Add stock and potatoes, bring to a simmer, and cook until potatoes are tender. Meanwhile, remove and discard coarsest stems from parsley.

Add celery to onion mixture and cover pot; cook until celery is just tender. Remove pot from stove and allow to cool slightly.

Working one batch at a time, transfer vegetable mixture to blender (never fill blender more than 1/3 full with hot liquid). Add frozen peas and parsley to final batch, and blend until incorporated.

Strain blended vegetable mixture over a fine-mesh strainer into a bowl (see note, below); allow to cool and then transfer to containers and refrigerate until ready to serve.

Note: Straining the well-blended soup might seem like an unnecessary step, but it not only vastly improves the texture, it also removes bitterness, making the soup sweeter and milder.