A Cold Spring police officer who was the supervisor at the scene of a fatal shooting of an unarmed black man in New York City in 2012 said this week he would resign following calls from community members that he be fired.

Mayor Dave Merandy said that Officer Scott Morris, who was hired by the village in December to join its force of about a dozen part-time officers, told him in a phone call on Tuesday (June 9) that he planned to quit. Merandy said he and other Village Board members received a “bombardment” of emails this week questioning the hire.

In February 2012, Morris was the sergeant of a New York Police Department narcotics team when two officers followed Ramarley Graham, 18, to his Bronx apartment on suspicion that he had been involved in a drug deal.

According to news reports, Morris was sitting in an unmarked squad car a few blocks away. When told by the officers via police radio that Graham may have a gun, Morris asked them to confirm it. The officers soon responded they were certain Graham was armed.

Soon after, one officer kicked down the door to Graham’s apartment, and the other, Richard Haste, confronted Graham in the bathroom and shot him once in the chest. No weapon was found. Officers found marijuana in the toilet.

Haste was indicted on manslaughter charges, but a judge threw out the case, ruling that the prosecutor had given improper instructions to the grand jury. A second grand jury declined to indict Haste, who left the department in 2017. The officer said he thought Graham was attacking him; an NYPD review reprimanded the officers who entered the apartment for showing “bad tactical judgment” but found the killing “legally justified.”

Neither Morris nor the officer who kicked down the door were charged, but Morris faced departmental reprimands for “failure to notify police communications” and “failure to supervise members during a police incident.” In late 2017 he agreed to a 30-day suspension without pay and resigned from the force.

At the time, the NYPD declined media requests for the officers’ disciplinary records, citing Section 50-a of state civil rights law — a provision that the Assembly and Senate this week voted to overturn. Morris did not respond to a request for comment sent through Larry Burke, the officer-in-charge of the Cold Spring Police Department.

The controversy over the officer developed quickly over the past week. After the June 2 Village Board meeting, at which the use of the thin-blue-line flag on Cold Spring police vehicles was discussed (see below), The Current received comments questioning the hiring of Morris and drawing attention to the 2012 killing. (The Current was not aware of the incident when we reported in December that Morris had been hired.) Last weekend, flyers were handed out in the village encouraging residents to email Merandy to voice their concerns.

At Tuesday’s meeting, Merandy defended the hire, which was approved by a unanimous vote of the board.

Morris “provided all the information upfront regarding the incident,” the mayor said. “We knew everything. We did our research and background checks. We felt he wasn’t on the scene; that was one of the biggest things in our decision.”

Merandy complained that the flyers that were distributed “were taken as gospel” and led to a “kind of mob mentality.”

“That’s something we’re actually trying to fight,” he said. “The cause of stuff like this is people not really doing things rationally. “

Merandy said he addressed the issue with Burke and Tom Ciero, the president of the Cold Spring Police Benevolent Association, the union that represents officers, before speaking with Morris on Tuesday. The Village Board met in executive session before its meeting and agreed to accept Morris’ resignation.

“I do feel it’s unfortunate,” Merandy said. “We have mixed feelings about accepting his resignation. Unfortunately, in today’s environment, where we’re going, I don’t feel there is any way he can stay on.” Merandy said that, during the officer’s time with the department, “everyone was pleased with his performance.”

On Wednesday (June 10), Trustee Fran Murphy told The Current that, like Merandy, she feels there was a “mob psychology” behind the campaign. She noted at least one email referred to Morris as “a murderer.”

Murphy also took exception to a comment at Tuesday’s meeting by village resident Tara Vamos, who thanked high school and college students for their participation in the email campaign.

“I thought high school and college kids are trained to do research,” Murphy said. “It’s not just doing a Google search and picking up The New York Post.”

“We did our due diligence” before the hire, Murphy added. “We spent a lot of time and energy researching him,” including reading the NYPD report.

Murphy still questions her decision to accept Morris’s resignation. “I wanted to have the guts not to do that, to keep him on,” she said. Refusing his resignation was discussed, she said, “but we could not find a way that was not going to be detrimental to the village.”

Murphy said the safety of village residents was a concern. There was fear that in the current climate, if Morris did not resign, protests would escalate. “What we did was wrong for him, but right for the village,” she said.

Cold Spring resident Cassie Traina was among those who encouraged people to contact Merandy, and an email she wrote was the basis for many of the messages sent to the mayor. She disagreed with assertions that the effort was not based on research.

“This matter was researched thoroughly; I take this matter very seriously,” she said. “Letter-writing campaigns have been an important part of getting elected officials’ attention for decades at all levels of government.”

Traina said organizers were trying to force a response. “We wanted action,” she said, while also acknowledging “there has been pushback.”

Trustee Steve Voloto said he found comments on social media critical of the board for hiring Morris to be disturbing. “They assume the worst; that we’re either not doing a good job or we’re somehow racist in our actions,” he said. “They question how we could let someone who had ‘murdered someone’ become a [Cold Spring] police officer, when that is not the facts of the case.”

Morris was not charged with a crime, Voloto noted, nor was he implicated during the prosecution of the officer who fired the shot. “Haste didn’t say Morris told him to kick that door down and get that guy,” Voloto said. “He did it all on his own.”

Voloto said he feels Morris was not treated fairly by the NYPD, and that “he’s being treated in a similar way now in this village by the people who think he killed people. But he didn’t. Someone who was under his charge didn’t follow procedure.”

At the same time, Voloto said he understands the anger about Graham’s death. “People have the right to be in their homes,” Voloto said. “We have rules about that. You can’t just kick somebody’s door down and shoot them.

“The people who are getting mad at Scott Morris have a right to be mad; the police are like an occupying force,” Voloto said. “It’s not right. I’m very concerned about what’s going on in our country.”

Trustee Lynn Miller also was critical of how some residents responded.

“I’m willing to bet that few, if any, of the people now targeting Scott Morris have ever bothered to talk with him about the Graham incident or anything else,” she told The Current. “Some people, in their zeal to effect legitimately needed reform to our national justice system, have misdirected their efforts and heaped injustice on a good man who has served our village well. However well-intentioned they may be, their blindness to their own prejudice is astounding.”

After hearing complaints from residents at the June 2 meeting of the Village Board, Burke this week removed thin-blue-line flag decals from the police department’s squad cars.

The decals, which had been applied about a year ago, were popularized by Blue Lives Matter, a national campaign created in reaction to Black Lives Matter. The symbol has more recently been appropriated by white supremacists.

Burke said the decals were intended to honor police officers killed in the line of duty, and that he would remove them only if ordered to so by the Village Board, which planned to continue the discussion at its June 9 meeting. But in the meantime, Merandy said he spoke with Burke and Ciero and they agreed to remove the decals.

Ciero said he was “disappointed that what was meant as a tribute was used as a weapon to hurt people by [racist] groups that no one wants or supports.” 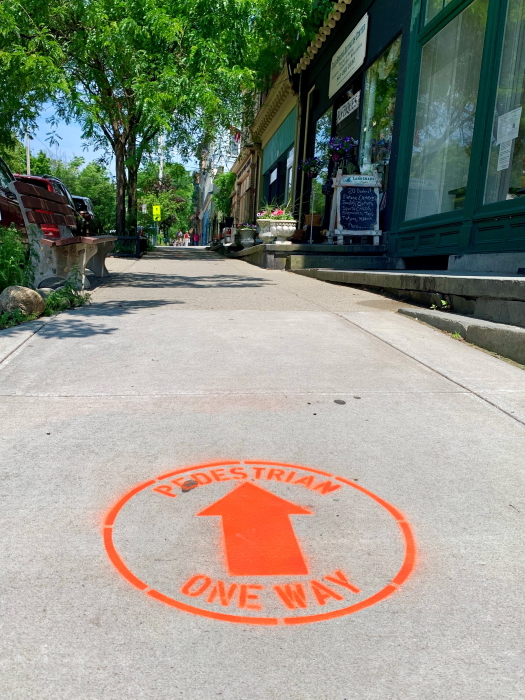 Cold Spring this week applied sidewalk signs to encourage social distancing by directing pedestrians to walk east on one side of Main Street and west on the other. (Photo by Teresa Lagerman)

The Mid-Hudson Region on Tuesday (June 9) entered Phase 2 of the state’s planned reopening, and Merandy reported a number of related developments:

■ Dockside Park, Riverfront Park and Mayor’s Park will now be open on weekends, although the Tots Park remains closed.

■ Restaurant owners wanting to use sidewalks for outdoor dining should contact the village clerk.

■ Retail shops can admit customers while adhering to state guidelines.

The placement of sandwich-board signs and merchandise on Main Street sidewalks is prohibited.

In addition, the board declined a request by the organizer of the Putnam County Wine & Food Fest to hold the two-day event over Labor Day weekend. It had been scheduled for mid-August but the board last month canceled all events at Mayor’s Park until at least Aug. 31. The board said it would reassess its policy on large events in mid-July, including Community Day, which is scheduled for Sept. 6.

■ Cold Spring police officers responded to 61 calls for service in May and issued 18 parking and six traffic tickets. Two arrests were made, both for trespassing. The Cold Spring Fire Co. responded to six alarms.

■ Miller said she is investigating the possibility of establishing a human rights commission.

■ Village boards and committees have begun meeting by video conference.