Langley replied that an executive order issued by Gov. Andrew Cuomo assigned the chief executive of each municipality — not law enforcement — to conduct the review.

Legislator Nancy Montgomery, who represents Philipstown and part of Putnam Valley and, like Langley, is a Democrat, urged the three-person Protective Services Committee to not politicize the process.

The acrimony occurred during the committee’s Feb. 18 meeting, held by audio connection. 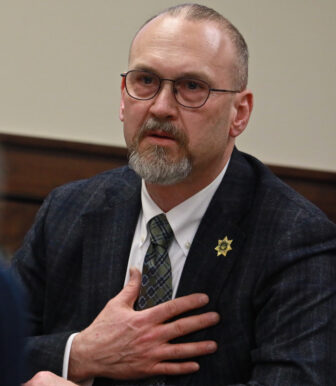 Langley, a Philipstown resident who took office in January 2019 after narrowly defeating the longtime Republican incumbent, Don Smith, is seeking re-election in November. He faces a challenge from Kevin McConville, another Philipstown resident and a former chief of the Metropolitan Transportation Authority police. McConville ran for sheriff against Smith as a Democrat in 2009 and as a Republican in 2013.

To address perceived racial injustice in policing, Cuomo in June ordered municipal governments to scrutinize their enforcement practices by April 1 and report suggested reforms to the state.

Putnam established its review panel of elected and appointed government officials that met for the first time in August and released a 194-page draft Police Policy Comprehensive Review this month. Langley, who serves on the 22-person panel, assured legislators that the Sheriff’s Department “is on board 100 percent in this process.” Other panel members include Cold Spring Mayor Dave Merandy and Officer-in-Charge Larry Burke. Subcommittees of stakeholders with specific interests in policing were convened to assist, although some have complained they were not allowed sufficient input.

Among other measures, the draft advocates revisions to the Sheriff Department’s policy on use of force to better reflect New York law, which states an officer “may use physical force when, and to the extent he or she reasonably believes to be necessary, to effect the arrest” of a suspect “or to prevent the [suspect’s] escape from custody, or in self-defense, or to defend a third person.”

The shorter Sheriff’s Department policy says an officer “may use reasonable physical force to effect an arrest, prevent escape of a person from custody, or in defense of self or others from imminent physical force.”

“We want to know what you have done” to align those policies with the draft, Nacerino told Langley. “I don’t see in the Sheriff’s Department plan any of those recommendations.” Legislator Neal Sullivan of Carmel-Mahopac, a committee member, voiced similar criticism.

Langley said his department has been releasing texts of policy changes but that the state “requires the county executive to write this document, not the sheriff.”

“These are your policies,” Sullivan responded. “We need an action plan from the sheriff.”

“The onus is not on the county executive,” Nacerino said.

Langley noted that Cuomo instructed the “chief executive” of a municipality to conduct the review. The only person named on the cover of Putnam’s draft is Odell.

Committee members also argued that Langley refuses to engage in openness and to recognize the role of the Legislature and Odell administration.

Legislator Amy Sayegh of Mahopac, the third committee member, said the comments by the review panel’s citizen groups shows “the public is really crying for transparency from law enforcement.”

“The sheriff thinks he can do whatever he wants and is not accountable to anyone,” contended Sullivan, who accused Langley of “mismanagement” and said numerous requests for information, on such matters as misconduct in the department, “have never been complied with. We need a sheriff who understands our needs” and transforms the department “to match our community,” he said.

The sheriff explained that if a legislator wants material on an incident it can’t always be legally provided. “Those who enforce the law must obey the law,” he said.

Montgomery advised her colleagues to proceed carefully with the review and “not just give your pitch to get some other sheriff elected” [McConville, who has been endorsed by Odell and many of the legislators] who “will just rubber-stamp everything you want. That’s what this is all about,” she said. “Let’s get this right for our people and stop throwing politics into it.”

3 thoughts on “Putnam Says Sheriff Not Cooperating with Review”