At its meeting on Tuesday (Jan. 18), the Nelsonville Village Board discussed the perennially fraught topic of hazards that pedestrians face from speeding cars, non-existent crosswalks and signs with illogical limits.

Former Mayor Tom Corless said that traffic problems, and efforts to get the state Department of Transportation to take action, date to at least 1996. Main Street, which Nelsonville and Cold Spring share, is also a state highway, Route 301.

Trustee Dave Moroney pointed to inconsistent signage on Route 301 where it comes into Nelsonville. Drivers turning west onto 301 from Route 9, another state highway, soon see a sign with a 55 mph limit; that drops to 40 mph at the Jaycox Road intersection and does not drop to 30 mph until farther along in Nelsonville.

The 40-mph limit doesn’t slow drivers down,” he said. “It’s too fast going down that hill.”

Corless said the limit “should be 30 when you get to the village limit. We’re an incorporated village and there’s a [state-mandated] 30-mile speed limit in residential areas.”

Trustee Chris Winward observed that cars also travel on Fishkill Road, a county road, and cut over to Peekskill Road. (That allows drivers to race from Route 9 just north of Cold Spring and Nelsonville to Route 9D at the southern end of both villages, while avoiding most of Main Street and the traffic light.)

Winward said the village needs a pedestrian walkway near the bakery and shops at the intersection of Main Street and Fishkill Road, more law enforcement and village court attention to speeding tickets. “There’s multiple issues at play here,” she said. 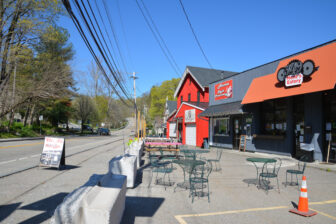 In April, she and Trustee Maria Zhynovitch had warned of dangers at the Fishkill Road-Main Street intersection.

Moroney said that the Sheriff’s Department “has been ticketing the last two weeks. They’ve been pretty active here lately.”

Mayor Mike Bowman agreed that “there’s been increased enforcement. But I don’t know if it’s translated into more tickets.”

Like Winward, resident Tom Campanile zeroed in on the Fishkill Road-Main Street intersection. “It’s hazardous,” he said, asserting that speeding drivers are usually not locals. He proposed installation of monitoring devices.

Bowman said that the village had requested speed-tracking equipment before, but the state wants a traffic study done first.

The mayor said that the Y-shaped Main Street-Fishkill Road intersection isn’t the only area of concern because farther west, where Main Street curves, he regularly sees drivers pass in a no-passing zone.

The Philipstown Town Board has made attempts in the recent past to lower speeds elsewhere. In 2019, it passed a resolution asking the state Department of Transportation to extend, for a quarter-mile, the 30 mph speed limit on Route 9 that passes the private Manitou School. The board also requested that the state lower the 30 mph limit on Winston Lane between Route 9 and Sprout Brook Road in Continental Village.

In 2017 in Cold Spring, the Code Update Committee suggested that references to a 15 mph limit be changed to reflect the state-mandated 30 mph minimum. That caused a minor uproar from residents who thought the village was raising its limit. Marie Early, then deputy mayor, explained that a previous board had amended the code, with the blessing of the village attorney, to lower the limit to 15 mph. But state law takes precedence, so that limit cannot be enforced, with school zones being one of the few exceptions.

Fran Murphy, then a trustee, said that previous boards had asked the state seven times to allow a lower limit but received no response.

Dave Merandy, then mayor, said the village could erect yellow, diamond-shaped signs to “suggest” slower speeds. They are common on state highways, particularly on turns, he noted, although they are not enforceable. Village officials decided that they could legally leave the 15 mph signs in place.