On the local government beat, the last six months of 2010 and first six months of Philipstown.info’s existence involved issues ranging from budget crunching, rezoning, and infrastructure demands to clashes over siren tests and waterfront lights, accusations from Lyndon LaRouche fans who likened President Obama to Adolf Hitler, and the disruption to Main Street from both an old cannonball and year-end blizzard. Then there was the ongoing argument over Cold Spring Village board agendas and whether or not a mayor should take notes at informal meetings.

Through successive drafts, the Town of Philipstown continued to tweak its proposed rezoning, producing yet another version in late November that added a new land-use overlay to cover historically important estates. Both village and town boards juggled the problems of limited economic resources and daunting demands. The town ended up with a fiscal 2011 budget, taking effect on Saturday, smaller than last year’s, though individual residents might see higher tax bills, thanks to fall-offs in town revenues. The Village of Cold Spring turned around years of deficits to produce a healthy audit with unspent money left over for 2009-10 and likely surplus again for fiscal 2010-11, which ends May 31. The Town Board also began studying the possible benefits, including tax-dollar savings, of consolidating the four town fire departments.

Reports on the village water system, which serves Nelsonville and parts of Philipstown as well as Cold Spring, brought sobering news of 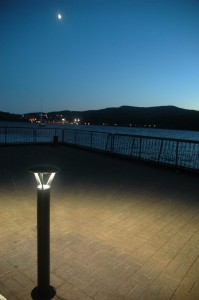 A plea by residents living near the Cold Spring fire siren to alter the practice of loud, twice-daily testing stirred similar passions, petitions, and heated discussion at the Cold Spring Village Board, which reduced the tests to a half-second in duration, only to reverse itself two weeks later and make the tests four seconds instead — shorter nonetheless than the 12-second blasts once heard.

An attempt in November by two men to deal with a Civil War cannonball closed part of Main Street, sent people fleeing buildings, and brought out fire and law enforcement personnel from multiple jurisdictions before a bomb squad detonated the cannonball in Mayor’s Park. Setting up shop Sept. 1 at a sidewalk table alongside the Foodtown plaza, the LaRouche contingent drew both dollars from Obama opponents and staunch criticism from other passersby.
Sharp disagreements broke out as well at the Cold Spring Village Board over everything from business parking-law waivers, efforts to draft a village Comprehensive Plan, and use of composting toilets to parkland to a host of other matters. Even something as seemingly mundane as agenda preparation and composition of minutes proved volatile.

Trustee Airinhos Serradas scrapped repeatedly with Mayor Seth Gallagher over the propriety of additions to agendas on a Monday or Tuesday before a Tuesday-night board meeting, and whether the mayor should take notes for minutes at the board’s workshop sessions. Less formal than the regular monthly meetings, workshops still often involve consideration of serious questions and subsequent votes. The board’s last meeting of the year ended with promises the issue would come back again, at the first meeting of 2011.

Meanwhile, the first snowstorm of the winter brought a seasonal peace.