Weather aside, the good news is that the preserved lemon recipe offered a few weeks ago was a success. As I recall, that mid-January column was a hopeful and forward-thinking response to a particularly cold and early glimpse of the winter to come. Just look how far that got us…

Regardless, I was pleasantly surprised by the exotic effects of the fennel seeds I experimentally added to the brine. They made for an aroma and flavor unlike any I’d experienced in store-bought preparations.

This got me thinking about fennel in general, which I am aware, divides people into sometimes severe party lines: fennel lovers and fennel haters. 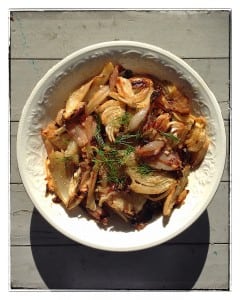 A member of the botanical family that includes carrots and celery (which its stalks vaguely resemble), Florence fennel or finocchio — the variety we use as a vegetable — is prized mainly for its anise-scented bulb (or heart). But it is also related to both coriander and dill (which its leaves or fronds resemble) — culinary herbs that also compel diners to self-select along equally unambiguous lines.

As noted, the seeds (actually the fruit of the plant) are also dried, toasted and ground as a spice. (Eaten whole in India, they are considered a digestive aid and are also used in baked goods in the Scandinavian countries.) Fennel seed offers both a distinctive taste and strong aroma and is a widely used spice and identifiable spice in Italian sausage. It is said to “plays tricks on your taste buds,” and in less-reputable wineries, fennel was occasionally offered before wine tastings to mask or sweeten the taste of bad wine. (In Italian the term infinocchiare is invoked when a person is being duped or bamboozled.)

On the positive side, it is widely cultivated, hardy and has a rich (primarily Mediterranean) culinary heritage. It is available year-round, and if you’re partial to its charms, it pairs mightily with seafood (particularly salmon) or meat (pork or chicken) or is forceful enough to almost stand alone.

So what we have here is a universally common and companionable vegetable that is considered an herb and a spice. I’d call that a pretty effective utility player well worth exploring on its own. Which leads us to this week’s intentionally vague recipe that I’m calling “Fennel Three or Four Ways.”

To address the sometimes overwhelming licorice taste of raw or herbal fennel, I’m suggesting a high-heat roasting along with a healthy dose of shallots to caramelize the ingredients and accentuate the savory character. Toasted and ground fennel seeds bolster the spicy aspects, and a splash of honey mellows the proceedings and promotes browning. Tossed warm with the preserved lemon vinaigrette and garnished with just a bit of the chopped leaves, there you have “Fennel Three Ways.”

Or, never one to leave well enough alone, you could add some raw shaved fennel bulb to the proceedings for a bit of crunch. And for over-the-top excess, a light dusting with fennel pollen (available at Spices and Tease in the Grand Central Market in Grand Central Terminal) actually gives you “Fennel Four or Five Ways.” (OK: With seeds in the preserved lemon recipe, let’s call it “Six Ways”!)

This is all to say, have it your way, with as much or as little fuss as you like. This is a great side with a simple piece of roast fish, chicken or pork as mentioned, but I would suggest that tossed with pasta — say, a whole- wheat bucatini — it also makes a great main course with just a minor fiddling — say, black olives. Or for a Sicilian take on the dish, try a variation on pasta chi sardi (usually additionally seasoned with saffron), a combination of pasta, fennel and sardines, finished with a handful of golden raisins or dried currants, both absolutely traditional and completely surprising.

There’s nothing vague about fennel, no matter how many ways you cut it.

For a preserved lemon vinaigrette:

Preheat oven to 450 degrees and place a rack in the top third of the oven. Ready a large shallow pan lined with parchment paper. Prepare the vinaigrette by whisking together the ¼ cup olive oil, vinegar, minced shallot and preserved lemon. Salt and pepper to taste and set aside.

Trim the stalks from the fennel bulbs by cutting along the obvious diagonal. Reserve some of the lacy fronds for garnish. (Discard or save the stalks for stock for another use.) Halve the bulbs along their flat axis and lightly clean and trim the root end. Slice the halves into ¼-inch wedges (making sure to keep a bit of the root end intact to hold the individual wedges together). Set aside in a large bowl.

Halve the shallots and peel away the dry skins. Again, lightly clean and trim the root ends, slicing each half into ¼-inch wedges (as per the fennel). Add all to the large bowl with the fennel and toss with two tablespoons of oil, the honey and the ground fennel seeds. Spread the mixture out on the parchment-lined sheet in one layer. Salt and pepper to taste and place in the oven. Roast unattended for 20 to 25 minutes, removing at that mark just to flip the vegetables in order to brown a bit on the other side, roasting for an additional 15 to 20 minutes. (Keep an eye on things here as you want some caramelization but not too much — it’s a matter of personal taste at this point.)

Remove from oven, returning the vegetables to the large bowl. Toss warm vegetables with vinaigrette. Serve warm or at room temperature (tossed with the shaved fennel and/or dusted with fennel pollen if using) garnished with the fennel fronds.